My Family and Other Primates, Kruger Park 2007 part 1

A wild animal marauding through the wilds of Kruger National Park in South Africa. His names is Lawrence, and he is only two years old. This is the story of Lawrence's first expedition in wild Africa.

Read the whole story...
1. The boy and his bushbuck, at Letaba
2. Monkeys, not such distant relations
3. Swinging through the trees, near Shingwedzi
4. Lions, a critical assessment
5. Drifting on the thermals, from Shingwedzi to Olifants
6. Elephants are big and grumpy, but fun to watch

The boy and his bushbuck, at Letaba

Just as I had expected, he was immediately at home in this sandy hot place. A small boy excitedly feeding fresh green leaves to a female bushbuck antelope on a desiccated African lawn. The bushbuck is taller than the boy, and adapted to a life as potential leopard food. It is a wild animal, but that doesn't stop Lawrence from claiming it as "my bushbuck". 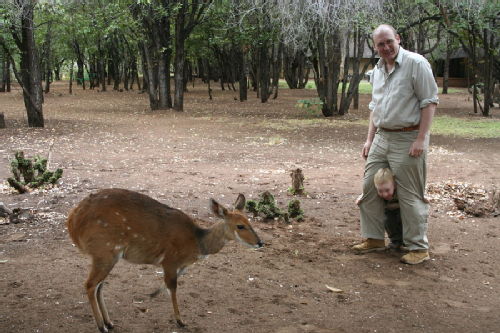 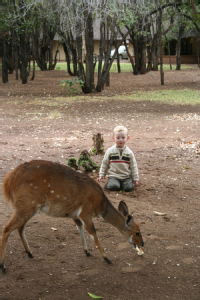 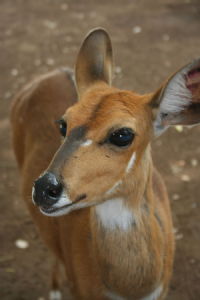 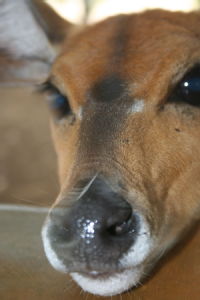 The strip of cultivated garden in which they play runs down towards the wide sandy bed of the Letaba River, stretching about one kilometre across to a distant bank lined with riverine trees. Beyond that, there is mopane covered sandveld all of the way to Moçambique and beyond. The river is in its dry-season state, empty apart from a narrow distinct channel lined with reeds and waterbirds, alive with crocodiles and hippopotami. Holding the twig with an evident sense of amazement, the little boy shrieks like a monkey as a long thin grey antelope tongue shoots out to grasp and strip the leaves in a curling grip. 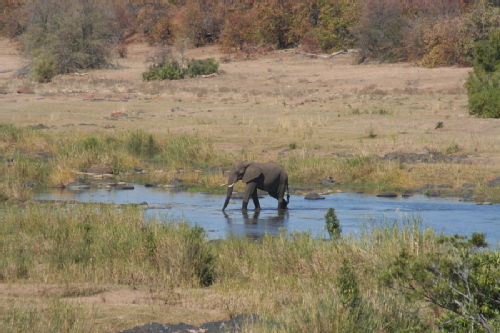 Elephant in the Letaba River

We travelled more than 24 hours for this, the end result being ample opportunity for (almost) 2 year old Lawrence to interact with the wildlife of the African bush: feeding them (bushbucks), chasing them (guinea fowls), laughing at them (monkeys and baboons), imitating (hadeda ibis, "ha-dee-da, ha ha, ha-dee-da", and the giant ground hornbill, "hoo-hoo-hoodoo"), and watching intently (elephants, giraffes, hyenas, warthogs, lions etc). 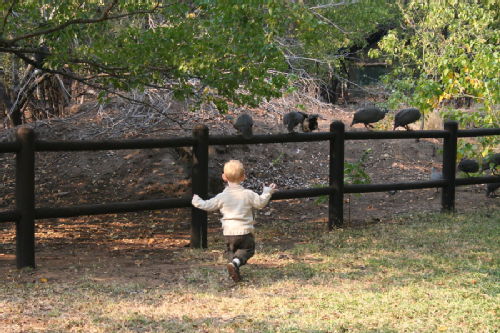 Sceptics in drizzly sad England had expressed their can't-do misgivings: a 2 year old obviously being underage for such adventures - too far, too hot, too cold, too wild. And besides, he would never really understand and appreciate it. However Lawrence is a little different to the average English kid, having grown up in a house full of African wildlife photography, he knew jackals and vultures before the English fox and red kite. Although his impersonation of the call of the African fish eagle has long been hampered by his inability to whistle, it doesn't deter him from trying to make that archetypal wild African sound. Upon seeing and hearing that wonderful bird swooping across the vlei, his imitation of its call (a series of soaring whistles that seem to embody its graceful flight in sound) was recognisable. And he has been to Africa before, as a small baby, so is perhaps at least to some extent acclimatised to it. 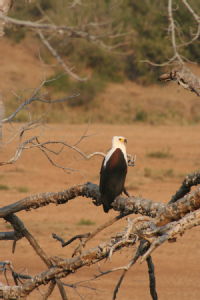 The journey had indeed been long, although mostly tolerable. At 12.30pm on Saturday grandad Dermot turned his limousine south towards Heathrow. Let's just forget the hell that is Heathrow. Lawrence slept on the 747 to Johannesburg (cost about £2000 for two adults and a child). At 12.30pm the following day our tiny South African Airlink plane landed at Phalaborwa on the edge of the Kruger Park (flight cost around £60 one way for two adults and a child, including a dramatic view of Blyde River Canyon). In the tiny safari styled airport, African grandad "Growwer" and grandma "Googoo" met us, having driven across from Botswana, their sudden appearance surprised Lawrence, even though it was promised for some time. At Phalaborwa we collected a comfortable and capable Honda CRV 4x4 from the National Alamo office (about £25 a day), and drove the short distance to the park entrance. From there on to Letaba Camp 100km into the park, with Lawrence snoring happily past buffaloes and elephants. 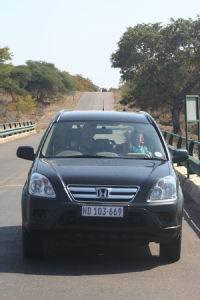 Emma and I know Letaba well, and chose it to be Lawrence's first home in the African wilds. The ingredients that make it ideal include: 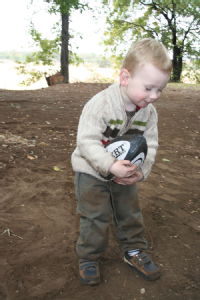 And at the end of a frantic day chasing animals, we could eat and sleep comfortably in one of the thatched cottages provided for self-catering accommodation. In the past we have stayed in the small basic rondavels (£25 per night), but with some members of our party being habituated to a more sophisticated environment, on this occasion we chose the large Melville Guest House (cost £125 a night, sleeps 9). The house has a well equipped kitchen inside, and a barbecue in its private garden overlooking the river. Housekeeping was more than adequately supplied by Agostino from Maputo, guardian of the Melville. 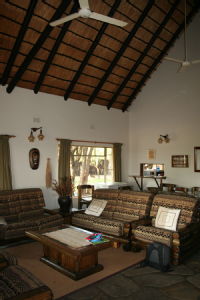 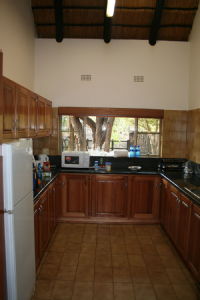 The Melville was our home for just two nights. It is excellent, and we would have stayed longer if it were available. In that time we had two good dinners (thanks to Googoo and Growwer), interesting game drives in the park (particularly nice zebras, wildebeests and giraffes), and much time spent pointing and screaming at the giant skeletons and tusks on display in the museum.


Just outside the museum there is a much less deceased wonder. A small garden of aloes is planted around a full sized model of a big tusker. The flame-red and orange and yellow flowers of the various aloes top their succulent green stems, in vivid competition with a swarm of birds: tiny iridescent sun birds in green, purple and scarlet like over-weight hummingbirds; the black headed oriole with its strong yellow plumage; the grey lourie (known as the "go-away" bird, following its call); both glossy and red winged starlings; crested barbets in red, black, yellow and green; mouse-birds with feathery plumes; a red capped cardinal woodpecker tapping the bark for grubs; and at night scops owl calling with its repetitive "brurrr" - most unlike an owl. Their colouring is almost un-natural, the product of an aesthetic arms-race within each species, and maybe also against the drab sandy uniformity of the background landscape. Splashes of colour marked by an emphatic evolutionary brush in the surrealist style of Joan Míro, or the hands of a child artist. A light show matched with sound, irrational and off-beat, but beautiful, like jazz. 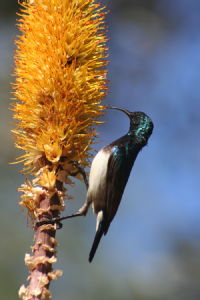 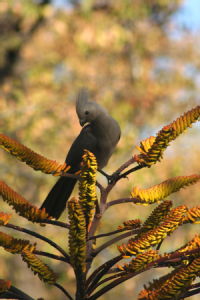 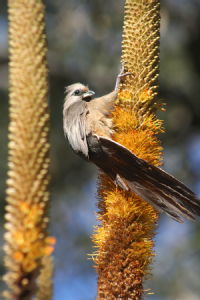 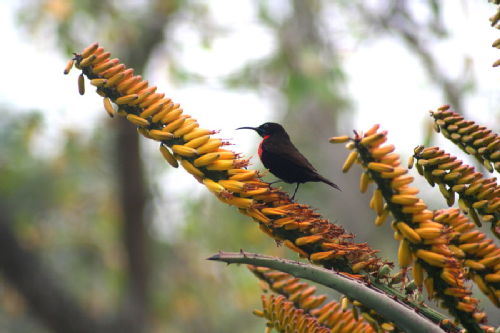 
The boy added to all of this in his own exuberant way. 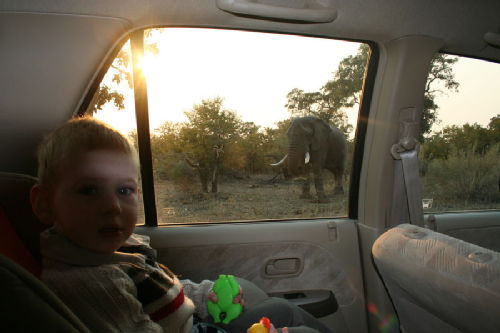 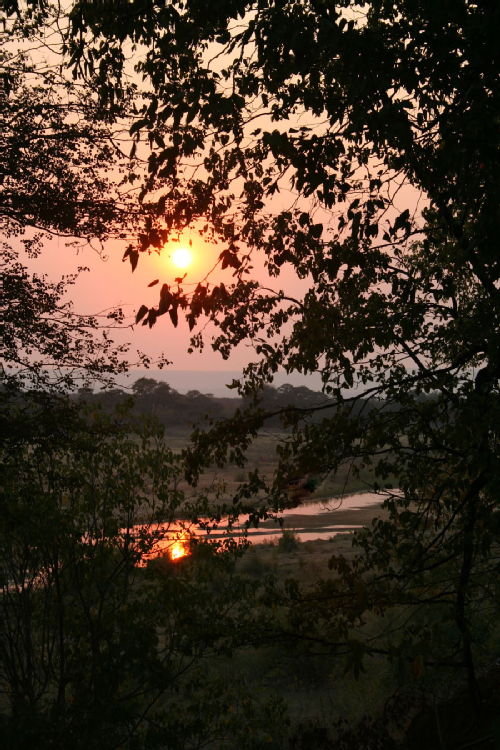