Mma Ramotswe And The Full Shopping Bag of Despair

“Dumela Mma”, said Mr J.L.B. Matekoni, proprietor of Tlokweng Road Speedy Motors. Mma Ramotswe slowly turned around in response, replying to his call with a monetarily cheerfull “Dumela Raa”, only to resume once again her sombre appraisal of the crime scene.

Mr J.L.B. Maketoni looked around in confusion. What was it that was making this erudite lady detective just so sad? At first he could see nothing unusual. As always the streets of Gaborone were filled with happy people busily making their lunchtime ways to or from Pie City, KFC, Nandos or some other such culinary establishment. Children played in the dust, baboons made exploratory forays into the city limits just a short distance down the Lobatse Road, whilst fat Nguni cattle pondered their chances of surviving the murderous traffic in hope of better grazing on the other side of the highway.

Suddenly she turned around to face her motor mechanical friend, lifting her arms up and sweeping them around in a most dramatic expression towards Kgale Hill. “Such a crime!, this is so terrible”. Kgale, with its familiar ‘sleeping giant’ face, stared indigantly back. To Mma Ramotswe’s increasing annoyance, Mr J.L.B. Maketoni could still not understand just what the problem was. He could identify a worn camshaft from just the sound of an idling engine, but in this case his powers of perception were failing him.

“Just look, she said, look at Kgale View! What can you see?”. Mr J.L.B. Maketoni looked towards the foot of Kgale Hill, the headquarters of the Lady Detective Agency. 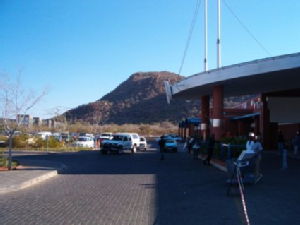 The new view of Kgale Hill

And then it all became apparent. Mma Ramotswe had just spent some time away from Botswana. Having been a keynote speaker at the great international conference of lady detectives in the USA, and having spent some unplanned time there solving various mysteries that were beyond her American guests (one of which involved a President and a young lady), quite clearly she was taken by surprise when encountering recent developments. Her tiny office was dwarfed by newly constructed grey and entirely out of place office blocks. Her view of the magical mountain, such a great source of inspiration, now permanently blocked. No longer could she watch the changing colours through the day, bateleur eagles dancing around its summit, and the occasional tourist heaving their way breathlessly to a magnificent view from the top.

Mma Ramotswe was close to tears. But there was worse still. Not only had her view been spoilt, but also the path to the little shopping centre that she so enjoyed walking along had been blocked by a terrible monster. The biggest indoor shopping mall in Africa had landed right outside her front door. She remembered her childhood, she remembered how proud everyone was of the country’s first mall, and how anyone could enjoy its open air splendour. 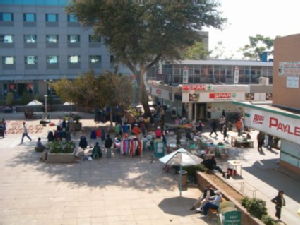 Mma Ramotswe had seen many terible things during her visit to the USA. Murders, corruption, Jerry Springer. But worst of all was the kind of progress that brought the ubiqitous indoor shopping mall to every small town. Progress, she thought, can just be so backwards.

And then Mr. J.L.B. Maketoni had an idea, a great idea worthy of the Lady Detective herself. “Come with me” he said. And off they went to the Tlokweng Road. At first Mma Ramotswe thought he was taking her back to his workshop for yet another meal of cold chips and tea (with 5 sugers). But at the last moment he changed direction, heading for somewhere also quite new. They parked amongst the Mercedes and Landcruisers, walked a short distance, sat down at a beutiful new coffee shop in the open air, watching the children play by the ice cream stand. 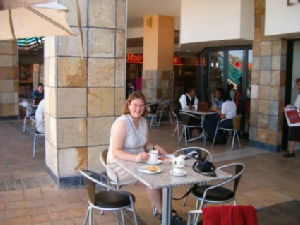 The new River Walk mall on the Tlokweng Road

Mr. J.L.B. Maketoni then did something that quite amazed Mma Ramotswe. Down he went onto one knee and said: “Mma, i know i do not have many cattle for the Bogodi, and i know that i am not a cultured man, but i would still like to ask you for the greatest gift, that of mariage.”

8 comments by 2 or more people