A Harley Davidson sounded the alarm, welcoming the slow approach of the still distant Spanish mainland by roaring out an un-necessarily raucous grumble from its perfectly polished show pipes. Had a fight actually broken out over his impetuosity, the short fat guy in a chromed open-face lid would not have stood a chance. Fortunately he understood the anger of the other hundred plus riders waiting on the bike deck of the ferry. He fumbled for the kill switch and abruptly turned his vanity off for a few minutes of humility. 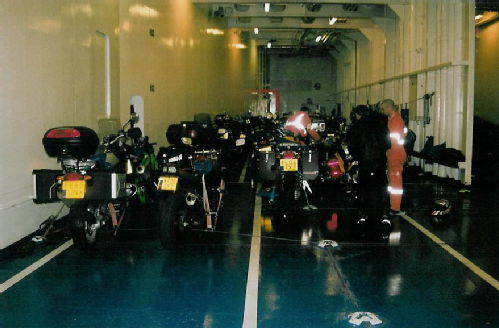 It took longer than anyone had expected for the ship to dock and the way to be cleared for our procession onto Cantabrian dry land. While we waited, a family of hippies in a hand painted Luton van provided comedic interest. My old Beemer looked just as anachronistic, but instead attracted respectfully awed looks and comments from other riders, despite of, or perhaps because of, its age. Then finally a very tall man on a very tall bike, a KTM Adventurer complete will full overlander kit including jerry cans, led the way out into the sun. BMW GS overlanders were predominant, with several groups target-fixated on the dunes of Erg Chebbi, Morocco, or further: Mauritania, Senegal, perhaps even Cape Town. Martin (R1100GS) and I (R100GSPD) followed cautiously along the Paris-Dakar style caravan of bikes.

And then Santander received us.

This whole cavalcade of two wheeled adventurers, many riding machines capable of crossing deserts with ease, came to an instant and almost complete halt only a couple of hundred metres into its soon to be divergent trajectory: road works, of the kind that the Spanish do worst, right in the middle of town between the ferry terminal and the route out to the south. An interminable inching forwards followed. Politely, the mass of bikes edged its way through small one-way streets pretending not to have even a tenouos connection to the noisy idiot on the Harley Davidson. A hundred would be desert heroes. And one small girl in a flowery dress and matching pink helmet. What? How? Too late, she had already filtered through half the mass of bikes like a butterfly, barely noticeable. Spanish attitude. Breathtakingly audacious. And when she finally found no further gap, surrender was not an option – but the pavement was. Within seconds she was gone whilst we just sat there in amazement.

We did eventually break free, spewed out onto a badly pot-holed high street, as rough as a Saharan piste. One particularly large crater swallowed a quarter of Martin’s rear wheel. And then we reached smoother tarmac. I didn’t even bother trying to estimate the length of our imprisonment in the jam. “Head south” was my only thought. Martin no doubt shared this desperation to forget our first minutes in Spain. We filtered out onto the A8 motorway, and put a pleasing amount of distance between ourselves and Santander, heading towards Torrelevegas and a roadside café in order to get coffee, cakes and some kind of plan. The coffee was freshly ground and blasted excellence, as is almost always the case anywhere in Spain. It worked. I had an idea.

Two English chaps on old German desert racers. 2000 miles of road. Many petrol stops, and many, many more cups of strong Spanish coffee. One litre of high mileage Castrol GTX to keep the almost run-in valve gears and pistons ticking freely. And hours of concentrated riding. There had to be a reason, surely? There is always something special about travelling by motorcycle. Ted Simon has developed conclusive arguments on the subject: being exposed to the elements and the terrain, covering large distances with ease, experiencing sudden contrasts and juxtapositions, meeting people on their own more human terms, the constant physical and mental difficulty that intensifies experience, the ability to just stop anywhere at anytime, changing direction or just letting unplanned things happen, and quite often the humility of being a small individual on a big road. Speed and agility should of course also be mentioned. Rural Spain offers opportunity for all of this. We found it on the snow covered mountain roads, endless twisting gorges and passes, along great lakes and through beautiful national parks. But there was also something else, something very personal for me. Having now ridden over 50,000 miles on my old GS, it actually feels like home. Bolting on the panniers and filling them with camping gear accentuates the sense of being a “one man caravan” (in the words of Robert Fulton). I have spent a significant part of my life piloting that bike through all kinds of traffic, weather and news. The M40 in the snow. The City of London on September 11th 2001. Oxfordshire in full flood. The Paris Peripherique in the rain, smelling like the ocean. It provides a platform from which I have experienced the world, its many textures and colours. And then to sit on that familiar seat, look out over those old handlebars at somewhere as exotic as a mountain pass or the orange-tree lined streets of Sevilla attunes my perceptions, my sense of difference, place and time. To “be” is to experience difference, to move through a world of contrasts (subtle or abrupt), to differentiate. Motorcycling is a great way of being. That then is my reason for travelling in this way.

And Then Someome Turned the Volume Up

I think it all started with a blackbird, sometime after 4am. A tawny owl then asked repeatedly “who is there?”. Within a few minutes hundreds of different points around the valley and mountainside began to mark out intensive and extensive territories with a great variety of songs. The voices were mostly familiar, perhaps accented with a Spanish twist (birds do have regional accents, as has recently been demonstrated). A few sounds were entirely new to me – maybe an alpine chough? However, the overall effect, the pattern of their distribution, was entirely unfamiliar. Whereas the birds of Kenilworth Common always seem hemmed in by the surrounding urbanization, the symphonic arrangement in this big wide valley was much more expansive and free. Birds called from every direction, at many different altitudes. In my tent, not far from the fast flowing river at the centre, I was overwhelmed and sleepless. I didn’t mind at all. It was a testimony of the biodiversity and natural wealth of this place. I lay down with my tent open, listened to the sound scape, and recalled the previous day’s ride. 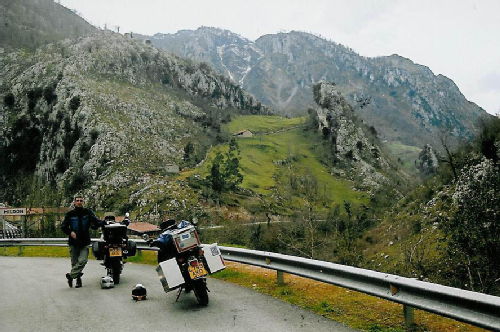 On our first afternoon in Spain we covered just a short distance. Riding westwards on the A8 dual carriageway, we had turned off at Peseus. A small road then led into the mountains of the Picos de Europa National Park, through Panes and a series of small villages. Out of season, much was quiet. The road narrowed and cut its way through overhanging rock. This was exciting in itself, but only just the start. In the distance occasional glimpses of snow covered mountains appeared and then vanished. Promising, but our first day would end at the excellent Naranjo de Bulnes campsite near Arenas de Cabrales, to be followed by one of the best dawn choruses I have heard. 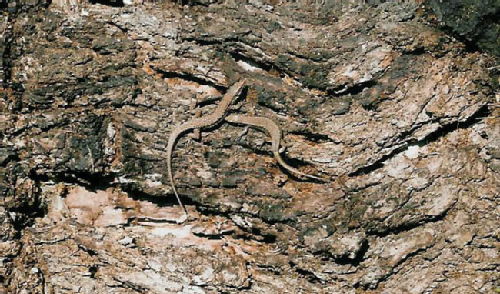 Before sunset, some time was spent photographing skittish lizzards in an old tree trunk. With our tents established, we walked the one kilometre along the road to the village, past an impressive hydro-electricity plant piping mountain waters through humming turbines. Upon our return, the restraurant and bar was the obvious destination. Drinking beer like the sun parched Alec Guiness, we quickly established ourselves with the friendly natives. Dinner was had. Sardine-sized trouts grilled with chips for me. Pleasing.

That evening I made two seemingly incompatable observations. Several times an old man cycled past towards the village. He was dressed in green tweed, with a flat cap. Tall, thin and angular, he propelled the cycle with a mechanical awkwardness, but also an ease of ancient familiarity. Each village-bound leg of his circuit saw a surprisingly large bundle of firewood strapped to the rack at the back of the bike. Thomas Hardy may well have been the last man in England to witness such activities. But in Spain, as we were to discover, such rural manual labour is common. And then later, another very natural and rural scene. Wooden pitchforks. Cartwheels. Rough adobe materials. Images of woodland birds painted onto windows. Vivaldi’s Four Seasons wafting out of speakers in each corner of the roof. Scorchingly hot water piped in with the music. The ammenity block of the Naranjo de Bulnes campsite tries really really hard, and somehow manages to be quite charming. It certainly is well looked after; a welcome discovery for a tired motorcyclist. 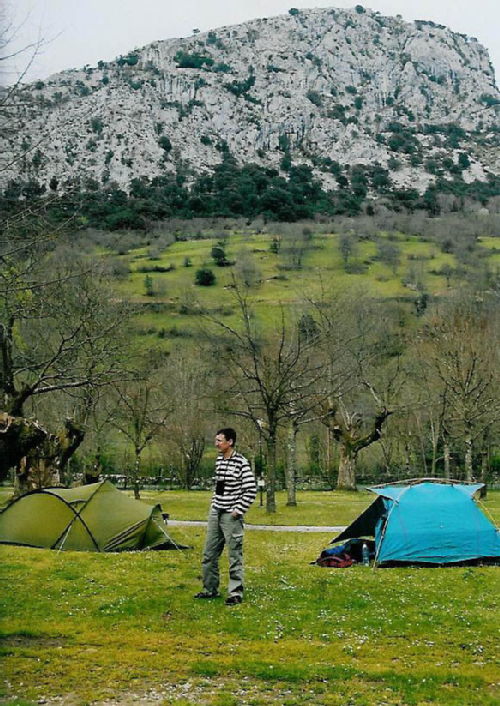 Now read part 2 of this trip.

8 comments by 3 or more people