What is vital for the new product development

Common Sense seems to be uncommon 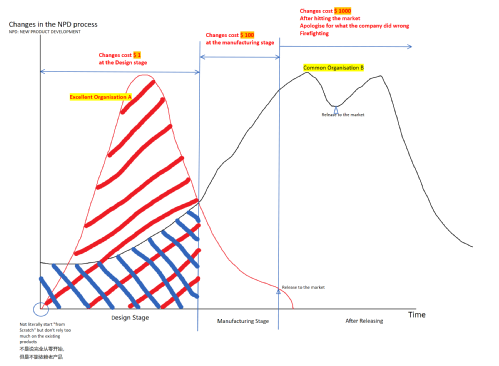 1. It is quite difficult to capture and elicit the customer requirements during the design process, but ironically few companies commit themselves to put enough time and resources into that stage which is the culprit of many potential crises fires in the future. They rushed to be the first one into the market, however, is it advantageous to be the first one or the better one?

2. Basically, for any new product development process, the cost is lower at the very design stage than any later stages.

3. Ask yourself how much time and money did you spend on the design stage? And how much money takes you to cease the fire happened again and again.

4. The tricky thing is even though many companies could understand the point, but still do the same as the common organisation B. What are the hinders of that?

5. It supposed to be difficult to be a world-class, otherwise they're full of world-classes. It starts changing from the mindset of the top leader and then a group of cross-functional team.