I watched High Fidelity yesterday for the first time in ages, and came to a startling discovery: John Cusack literally can't get enough of Before and After Science by Brian Eno. 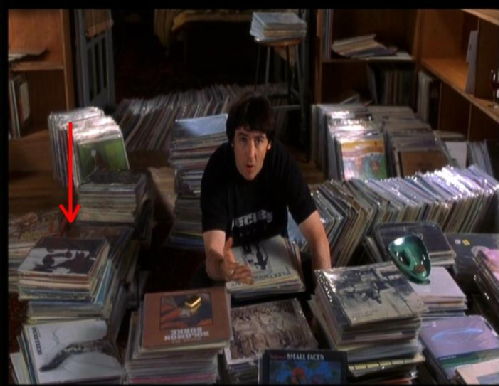 There it is. Look, with the red line. I appreciate that this evidence alone isn't particularly convincing, since he has about a million records. But now, look here. Ok, so I'm lying. This is the same set of records, but a different scene. However, if you look closely, the piles do seem to have been moved around a bit, and also the cover of the Eno album has been rotated 90 degrees clockwise. There you go. Not only does he have it on vinyl, he has it on cd as well. Look he's even examining the track list. It's not going to play on that record player though, is it? Someone should tell him And as if any more proof were needed, here it is again, in John Cusack's special record store.

I rest my case.