So I've been a little late with starting the blog again this year, but hell thats just how it is. Sometimes life is more important than this?

Mainly really writing again to get things sorted in my head. Late night rant anyone?

Ever had that feeling when you just feel completely isolated to everyone else? Just feel like there is only you and if you vanished tomorrow noone would notice? Thats how I feel at the moment.

Break ups, and ex's – replaced within moments? How can everyone replace eachother so quickly? It seems I can be replaced faster than anyone else! A break up and within days with someone else, a matter of hours is more essential than days. Maybe not even 72! am I that bad?

I live with people seems to be a stark contrast from what it was in the first place. Did these people even want to live with me in the first place? Now it seems they cant wait to get out of the room when I'm there? Stupid Paranoia? Do I do something to make them uncomfortable? what is it? Am I merely overthinking or does the fact I could go missing and not leave my room for a day and not be noticed gone mean nothing?

Its tempting it really is just to run away. See how long it takes for someone to notice I'm gone. I bet I could be gone days before someone even thought "I wonder where that guy we live with has gone"

Everyone else seems to have it easier, where have I gone wrong?

Alone… not even the half of it!! It affects us all in different ways… My last exam is tomorrow morning, and I have now washed clothes, and returned to normal!

Was a few scary days though last week! 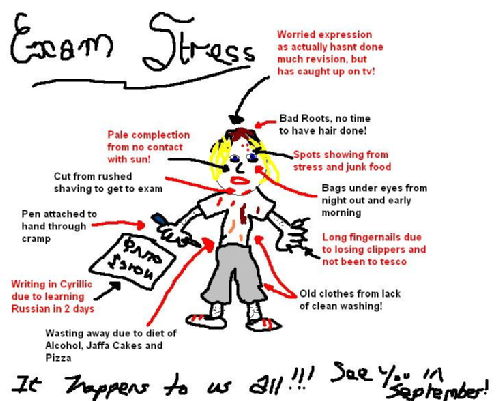 Whats that i hear? You need help remembering the fundamentals of Personality Theory!?

Using my great lyrical mind I have constructed an almost flawless (yeah right) version of Rock the Casbah explaining everything you need to know to get through Ian Morely's Personality Module!

The words dont always fit perfectly, but I am on kinda a tight budget ok!

Eyesenck didnt like it
Fuck the Unconscious,
Fuck the unconcsious x2

now over to canttell
o he really got it wrong
first order is the rule
second order just ignooooore
but as research changed direction
cantell came under fire
his traits began to fail
and those crazy ideeeas failed!

A weekend without West Brom

I know theres the 3rd division playoffs, and the FA Cup final, but I'm already missing the away trips and the atmosphere at home. I cant watch football on TV, im too bad at it… I start shouting things, and if I have to make do with the radio I'm terrible…

I would go and watch the cup final, but I really don't have much interest in it. Neither side has valued it, played understrength teams throughout it, and there is no underdog. Now they treat is as though its a massive achievement, fielding weakened squads in the final few games of the league (although it allowed us to snatch a point at Old Trafford – which ultimately kept us in the race for survival). Both sides have qualified for Europe, so their isnt a great deal at stake, not even financially. Granted, it gives both sides the oppertunity to please their fans by winning some silverware this season, but aside from a great day out for the fans is it really that great a feeling? Man Utd and Arsenal fans are used to winning the League and winning in Europe (well Man Utd's fans are) The FA Cup no longer goes to the best side in the country, just the side that has overcome the challenge of lower league opposition with understrength sides.

If only Exeter had put away that chance at Old Trafford it could be a very different story. The only final I've been interested in lately was the Millwall-Utd one, and poss. the S'ton-Arsenal one. I'm a West Brom fan, I like the underdog… this year's doesn't interest me at all.

Oh and while im on the topic, I hope AC Milan beat Liverpool in the Champs League in the coming days. Rafa Benitez disrespected the true value of the FA Cup with his team at Burnley and then devalued it with his post-match comments. Hopefully we will see the underdogs of Merseyside in the champions league next season, and not a bunch of foriegners, claiming to be Liverpool!

All Change Please… All Change

Who would have thought a routine Virgin Trains trip would inspire me to change my blog, and once again become part of the cutting edge of the blog community…

Now i reckon its time those ratings were changed… and i will be posting ugly fans over the next few weeks!

This is the first contender, care of the BBC site…

League 1 high fliers – Luton Town… at least the people on the pitch are serving up something a bit more pleasing to the eye than what lies off it! As all of you know, Vicky G and I are friends in benefactors… but friends with privilidges, mainly sexual. The girl has a mouth like a dyson :p – she wont mind me saying that as she loves the compliment!

however, my rampant friend has one flaw of late!!

the girl who apparently likes Alan Partridge has failed to answer her phone on 4 seperate occasions now when i have rang her with the comedic intent to call her a fat cow and hang up!

Have we put the clocks forward?!

Sat in the library reading about Ebbinghaus and Frederic Bartlett… all kinds of connections should be firing in my brain ready to compare them in the essay (bit of a psychology joke in there… spot it ;-))

and the only thing i notice is my laptop and phone are an hour behind the library clock.

Ive been working off my phone clock all day… is it 2–45 now or 3–45 thats the big question as it has a massive bearing on the amount of traffic i expect to have to put up with!

Where the fuck is Brenda?

Ok before we start Im not a necropheliac, and im not sitting around waiting for an old woman to come and pleasure me.

Quite the usual, Brenda is the name of my laptop, or at least my new one when it arrives. Ive ordered it, and knowing i like to leave the house once in a while I paid an extra bit of cash for next day delivery to save me having to wait in the house all day for 4 days just incase it comes.

Well… I ordered it Wednesday and got a call on Thursday saying it will arrive between 9 and 5–30 on Friday. at 8–30 the door goes… a man with a van and a clip board… sign here mate gives me a leaflet and an envelope containing the warranty and fucks off. No Laptop.

I phone the company and some Indian voice "split delivery mate, no worries will be there for 5 o'clock" 5 O'clock comes and I phone them back "still isn't here... where is it?" same Indian voice "be there by 5-30 mate" and hangs up.

Come 6 its still not here… and the office is shut for the weekend. I email and recieve no reply on Monday and call up about 9–30 "hi, where is it" and after about 10mins on hold a little old lady (annoyed, I couldnt shout and abuse her) "its been delivered" _"no it fucking aint sunshine"_ "oh ok. yes its down for delivery today" _"nice to see its next day delivery then.. only what 4 days late"_ "sorry hun"…. yeah that makes it better.

I needed the laptop for some work i was doing away this weekend, so now im swamped with work, and at 12 o'clock monday… the laptop that should have arrived at 11 today like i was informed, has it come?

Lacking the time at present to have an imagination, im just going to steal things off other peoples blogs. And as ever my source of whimsy Miss Victoria Sara (not a typo, she does spell it like a moron) Galloway, has popped up with this little trend.

So my 3 favourite words:

Still carries the same venom in everyday use as its more disgustingly spelt alter-ego c*nt. Personally I prefer to use this one purely because it rolls off the tongue and has much flexibility. It can be used in a variety of different forms:

A word which litters my psychology essays from start to finish. Dichotomy is hardly used by other members of the Benefactors crew, and personally i find this a massive disappointment. Having struggled to explain to several of them what it actually means, i feel they have no excuse. Especially since I used the phrase:
"I dunno what it bloody means, I just know when to bloodywell use it"

I know its not a word of my own creation. And i know its not original. But Little Britain thrust (another kewl word…yes I am a Freudian) this word upon me and I try to use it whenever I can to describe an arkward situation!