By the West, for the West: Deconstructing the Development Discourse 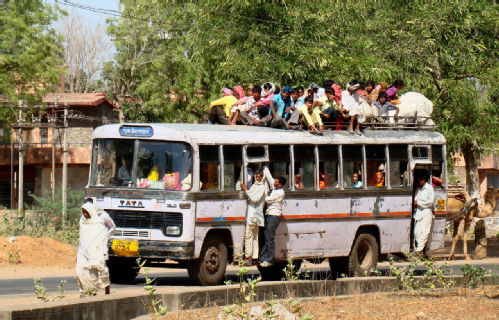 The invention of ‘underdevelopment’ and ‘global poverty’

In 1949, US President Truman advanced his Point Four Program wherein he made it the West’s self-ascribed agenda to deal with ‘poverty’ in ‘underdeveloped’ areas. It is in the context of the Cold War competition for world domination between the West and the East that the ‘grand strategy’ of Western-style development was advanced by the US, where development aid was sent to the newly independent countries in exchange for their loyalty.

The development discourse during the Cold War became a force that the leaders of the ‘underdeveloped’ world genuinely believed in. Development promised to them a world where they could be as prosperous as their former colonisers. Their colonial experience had taught them that there was no space for demonstrated weakness and vulnerabilities such as insecure systems of food, health, trade, etc., in the international arena, which was already taken care of in the developed West. To undo this insecurity, development presented a beacon of hope. Hence, as E.P. Thompson notes, the people who were objects of development during the colonial times and had ended up in a situation of depravity due to its very functioning, came to fight “not against development but about it”. Such was the hope that was eschewed by the ideology.

Even in the neoliberal era, bullied by the IMF and World Bank for decades, developing countries adopted American institutions and policies under Structural Adjustment Programmes (SAPs) to learn “good” economic practices to get a sip out of the elixir of development which was the stronghold of the West. Even as they witnessed, for instance, during the East Asian crisis, the coercion of these fellow developing countries by the US and the IMF to reduce government welfare expenditure—even as it resulted in the resurgence of AIDS in Thailand and curtailed food subsidies for the starving in Indonesia—they were told it would be painful at first, but in the end, they will emerge ‘developed’. Adopting SAPs on the recommendation of these international financial institutions led to similar adverse consequences for the African economies, at times heightening unemployment and social insecurity. The developing world held onto the hope of development even as, a decade after, the same policies—increased government spending, massive deficits, bailing out of banks, interest rates as low as zero—that they were lectured about being against growth were adopted by the US to deal with its own 2008 crisis, aided by some of the same officials at the IMF and the World Bank. Why, despite this, did the non-West continued to follow the linear path to development?

With Truman’s speech in 1949, two billion people suddenly came to homogenously identify themselves as ‘underdeveloped’. Failing to note what they possessed—cultural diversity, talented population, and biodiversity—they came to see themselves in terms of what they were lacking: development. The term ‘underdevelopment’ had never before been used to classify entire populations into a hierarchy, where the developed were superior and the ‘underdeveloped’ inferior. The term was thus the creation of the development discourse advanced by the West. The development discourse helped solidify a specific perception into a fact that suddenly dichotomised the world and spoke to the vulnerability of the newly independent countries. Hence, the discourse of development was enticing because it not only made the achievement of Western-style development seem attainable for the ‘underdeveloped’, but also created the desirability of such development in the first place.

Similarly, global poverty—which rendered two-thirds of the world poor—was a phenomenon that was the construction of the development discourse. Poor people had always existed in all societies—which, as highlighted by Mustapha Kamal Pasha, kept devising vernacular methods for their support—but they had never become a feature that characterised countries in this manner before. Global poverty meant that the ‘underdeveloped’ countries came to be defined in relation to the standard of prosperity set by the ‘developed’ countries.

The development discourse led to the construction of ‘underdevelopment’ and ‘global poverty’, both of which ushered the creation of new discourses and practices that shaped the reality to which they referred. Faced with this new social reality where their existence came to be defined in terms of ‘poverty’ and ‘underdevelopment’, the discourse of development came to be naturalised as the necessary response for the leaders of the Global South, which they believed must be followed at any cost. Hence, development can be understood as a pervasive discourse, through which, the West influences and produces social reality for the non-West.

‘Benign’ Remodelling of non-Western Societies through ‘Science’ and ‘Objectivity’

At the heart of the Western discourse of development lies the normative need to compare non-Western societies to those of the West and frame the difference in terms of something the former is lacking and should aspire to achieve. It is what they lack, and the West possesses, is precisely what makes the non-West ‘underdeveloped’. Since the West holds, through virtue of experience (which itself is abstracted from history), the secrets to development, the path to development cannot be walked without an external intervention by the West.

Hence, the discourse of development encourages a study of the non-Western society by the knowledge-bearers and experts of the West. These interventions have produced descriptions and statistics—which cannot help but remind one of the colonial practices of census for resource exploitation—of the ‘underdeveloped’ that convey the various standards in which the non-West is lacking against entirely Western-centric rubrics. Therefore, the discourse of development has attempted to normalise the world in terms of the developed West’s experience and expectations.

However, the failure to meet these standards is not taken kindly to in the development discourse. Prescriptions given by development institutions, abstracted from any relation to colonialism, indicate that the ‘underdeveloped’ are oppressed by their own lack of initiatives, primitive societies, traditions, and overpopulation. These adjectives are also repeated endlessly as the root cause of ‘problems’ in the developing countries. For instance, framing of the ‘crises’ of African agriculture by the World Bank rests on the seemingly obvious connection between “more people/less land/ lower productivity/less food” which are merely vast generalisations that not only ignore the historical experience and difference in social structures but also end up caricaturing Africa because of its population.

Timothy Mitchel has shown that USAID’s development texts on Egypt have continually portrayed the Nile Valley and the peasantry living there as external to the political and economic transformations of the twentieth century, and hence, static over centuries. Portrayed as primitive and unchanging, then, agriculture at Nile Valley understandably needs the influx of Western technology and expertise. Jonathan Crush blames the development discourse for the propagation of the idea that societies evolved in a linear fashion, which then allowed development professionals to assume certain societies as static or being stuck in the past.

Given the ‘problems’ of the ‘underdeveloped’ countries in meeting the Western standards of development, the development discourse benevolently takes it upon itself to share its knowledge, science, and expertise to tackle them. Arturo Escobar highlights that development thinking has led to a conception of the social life in the non-West as a technical problem which requires the intervention of experts and science to rescue itself from its own stagnation. Every aspect of life—even the poor themselves—is subjected to the eyes of the experts and in military language, ‘action plans’ are drawn to impose on such societies. This trust in experts is combined with a blind faith in science, technology, planning, international organisations, and aid agencies, which are all seen as neutral and inevitably beneficial since their value has already been proven by the Western achievement of development.

Though development presents itself as essential, it seldom produces any new knowledge to tackle the problems it had set out to. Mark Duffield has shown that since 1950s, development reports carry the same recommendations: check population growth, modernise agriculture, reforestation, increase aid spending, renewed focus on poverty reduction, etc. Hence, the ‘technical’ study of societies through development analyses leads to a common diagnosis of problems in diverse societies, which, in turn, leads to the transfer of standardised policies from one country to another to tackle them.

This uniform application of development techniques has had irreversible consequences for the societies and cultures within the non-West. The use of buzzwords such as ‘participation’ and ‘empowerment’ to denote the upliftment and involvement of communities in the development processes—which attach a moral feel-good character to the cause—has led to the legitimisation of many development interventions. However, the reality of the development discourse goes against the very idea of involving communities, who are continually ignored in the process. Stacy Leigh Pigg points out that in development planning, though it is widely assumed that villagers are “people who don’t understand”, there is an implicit sense that villagers must be labelled as ignorant not due to their absence of knowledge, but because of “the presence of too much locally-instilled belief”. Hence, the price of development has been the destruction of history and cultural traditions for two thirds of the world’s people.

The development discourse—by reducing people to data points, by destroying many historical practices of the non-West and tainting their cultures, by remodelling the non-Western societies according to Western standards, and by regarding percentage point decreases as an indication of poverty and inequality reduction—does violence to the very hope of a future without poverty and inequality. Thus, the development discourse advanced by the West works for the advancement of the West.

Shreyanshi Upadhyaya is a part-time Research Assistant at WICID and a full-time MA International Relations student at Warwick University. She draws inspiration from Postcolonial and Feminist International Relations theories, and her current research interests centre on optics, popular culture, and the construction of the national security environment in India.