A Climate Reality Check, on Social Collapse and Public Knowledge

The Theory of Civilisational Collapse

Extinction and Rebellion, the global Climate Emergency campaign network, believe that Global Heating and associated Climate Breakdown has already locked in a likely “Social Collapse” (Reed 2020; Hallam 2019). To understand the potential for this, leading speakers such as Rodger Hallam argue, look at the failed state of Somalia (2019).

Potential pathways for such an unravelling of so-called “civilisation” include the collapse of asset prices for coastal property and the “fiscal crisis of the state”: the scenario in which ecologically catalysed recession is so deep, that the legitimacy of government evaporates as its capacity to fund welfare amid deep inequality is neutralised, and the poor cannot afford food (Hallam 2019). Based on their academic research and scholarship, Rupert Reed, Professor of Philosophy at the University of East Anglia, and Rodger Hallam, previously a researcher at King’s Collage London, also outline that we know exactly what happens to social stability when poor people lack food: they understandably secure their livelihoods in any way they can (Hallam 2019).

The ultimate end, Hallam (2019) suggests in talks given across the UK, is war. This might be across borders as hungry migrants move on scales the world has never seen (MPI 2020); it might be through internal conflict as citizens riot for food, facing little resistance where a police force and military have gone unpaid for long enough. If there is one robust law of social science, it is the one promulgated decades ago: revolutions happen when the masses go hungry (Risbridger 2018).

The Limits of Public Knowledge

For many, the sort of dystopian or apocalyptic visioning promoted by Extinction and Rebellion is inappropriate. Critiques refer to the fallacy of such a Malthusian’esk and neo-Malthusian theory that predicts significant social fallout when food demand outstrips food production. Commentators who prefer to celebrate the gains of human development, highlight that humanity has always triumphed in difficult times: “adversity is the mother of invention”, or so goes the often used, yet little reflected on saying of convenience.

Indeed, this is a privileged defence given that:

“The [UN’s] latest edition of the State of Food Security and Nutrition in the World…estimates that almost 690 million people went hungry in 2019 - up by 10 million from 2018, and by nearly 60 million in five years. High costs and low affordability also mean billions cannot eat healthily or nutritiously”(FAO 2020).

Not only has the frequency of malnutrition grown in recent years, much of the most intensive nutritional deprivation is also inextricably interconnected with violent conflict (GAIN 2020). The causation between food availability and violence is of course complex, but only those with the fortune not to experience this nexus for themselves have the privilege to dismiss its relevance out of hand.

Moreover, the vast majority of the world has failed to notice a dual indictment of the current nature of human “progress through innovation”: that illustrated by the role of information, knowledge and education, a much-praised characteristic of democratic organisation and widely hailed as part of the “white” Northern world’s defence against social collapse.

Empirical Realities of Food Markets in 2021

As part of my scholarship for research-led teaching on food, security, sovereignty and sustainability, I have paid constant attention to the United Nation’s Food and Agriculture Organisation’s (FAO) regular reports on crop production, consumption and stocks, as well as their individual and collective prices (FAO various). In classes, I have elicited students’ current knowledge of food dynamics before challenging them with the more accurate realties. As part of this exercise, those learners thinking of themselves as well-informed find most headlines and graphical representations rather unsurprising.

To take a few examples of the insights we all might find familiar: 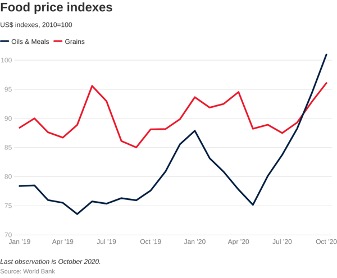 Since I started writing this blog, some analysis has started to become more pertinent, with the more accurate soundbites that:

Sadly, while more precise than previous accounts, this messaging still misses the simple statistical observation that obliterates the relevance of this coverage. Reviewing the “real” price of food over time – expressed as an index relative to a base year, rather than the nominal value in currency, which makes comparison harder due to inflation – the only relevant way to capture today’s status of global food prices is to say that:

Even though the FAO has not coined this summary, its own graphic representations show the gravity of our current reality. While the FAO’s version can be seen at the bottom of their recent webpage (2021), below is my most recent reproduction, as I share with my students. Here the graph shows the most recent 2021price index calculation in blue, thus allowing easy visual comparison with the historical trend, shown in grey. 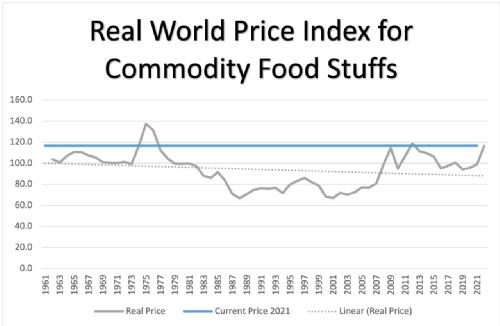 Here we see that apart from the food price crisis of 2012, and the oil price crisis of the 1970s, today’s real costs of buying food are higher than almost the entire period since records began in 1961. This also means that the real price is also now higher than in 2010, when food shortages and interrelated price crisis gave rise to what the European media labelled as the “Arab Spring”, in which multiple North African governments were overthrown (Zurayk 2011).

Beyond this, knowledge creators and distributors have been fixated on COVID as the reason for recent price increases. This is again as well illustrated by a Google search for information, which returns summaries such as:

“The prices of raw materials that go into morning staples have surged since the start of the pandemic” (FT May 2021).

It is certainly true that COVID has disrupted global food supply (Loborde et al 2020), however, this framing disregards a much more prominent theme, identified by FAO crop reports that provide explanations about the dynamics of supply and demand. For the most part, these regular briefings are written in fairly technically and arguably obscurantist language: here you’ll find expressions that attribute price rises to “increasingly tight global supply with lower-than-earlier-expected production and stock estimates…”.

However, when you move past these broad expressions you find others that explain the problems of food production: “Concerns over dryness in South America” (FAO 2021), “owing to poor weather conditions that curtailed yields” (2021a), “continued dry weather has partially curbed prospects, and field reports confirm inferior crop conditions compared to the average” (2021a). Put simply, one of the most prominent themes in FAO analysis has been the unpredictability of weather and the manifest inability of technology to full mitigate for this.

It is of course important not to be alarmist. This analysis is not sufficient to conclude that unpredicted weather results from climate breakdown, which is already undermining our collective ability to produce enough food. It is true that in recent years declining supply of some key commodities - such as cereals that provide nutrition for c.50% of the human species – has been outstripped by growing demand, therefore literally eating into global buffer stocks. However, buffer stocks do exist for this very purpose and there will always be periods of over demand: the situation remains stable because supply is sufficient to meet needs over the longer term.

What this empirical reality does clearly demonstrate however, is that when weather is hard to predict, for example where long-term climate patterns change, and continue to change as is increasingly predicted by leaked updated IPCC consensus science (Harvey 2021), producing enough food to feed a growing population will be increasingly challenging.

Alastair Smith is a Senior Teaching Fellow, in Global Sustainable Development, University of Warwick and Academic Lead for the Food Global Research Priority.