Plant Diseases in the News

The Forestry Commission is investigating a new outbreak of Phytophthora ramorum on Japanese larch, Western hemlock, beech, birch and oaks in Devon, Cornwall and Somerset.

A genetically modified variety of spud may have to be produced in Irish laboratories because of the growing threat from potato blight caused by the fungus Phytophthora infestans.

The fungal disease that wiped out the potato crop in the mid-19th century, causing more than 1m deaths, is posing a renewed menace after a more aggressive strain arrived, according to a leading scientist. This has prompted experts to intensify work, including using GM technology, to find a blight-resistant variety.

Follow-up to Effective chemicals may be lost contd. from Plant Diseases in the News 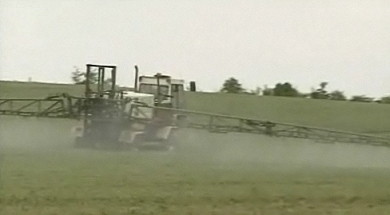 "We could lose 80% of pesticides currently available and this would end commercial production of many horticultural crops," he said.

Restrictions on dog owners and their pets have been introduced in a park after the spread of a plant and tree-killing disease. 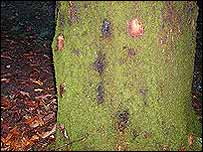 Cefn Onn park in Thornhill, Cardiff, has been struck by Phytophthora ramorum, or sudden oak death, which has attacked its rhododendrons.

Just by sniffing the air, an electronic nose can tell when cucumber and capsicum pepper plants are damaged – and even diagnose the problem. The gadget can distinguish the whiff of a plant covered with caterpillars from one plagued with mites, or just physically damaged. It could act as an early warning system in glasshouses, alerting farmers to the early signs of disease before crop yields fall.

More than 3,000 farmers in Uganda have been able to combat a pestilent disease that threatened to wipe out production of cooking banana, thanks to a joint initiative by the Government and the United Nations Food and Agriculture Organization (FAO) that also helped them boost their yields of the staple crop. A joint Japan-U.S. research team has discovered the mechanism through which the tomato yellow-leaf curl virus spreads in infected plants, and causes a disease which has stricken the world's major tomato growing regions.

Growers currently have to discard infected tomatoes to prevent the disease from spreading, but the discovery of the pathway through which this disease is triggered at the molecular level offers hope that the disease can be prevented in the future.

Busy lizzies being wiped out by mildew disease

Known as Impatiens downy mildew, it first appears as a white felt-like powder on the underside of leaves and spreads on airborne spores. Gardeners have been urged to keep an eye out for the disease and to destroy any of the bedding plants displaying symptoms to stop the spread.

'Busy lizzies being wiped out by mildew disease' - The Telegraph 3 September 2008...again, spot the liberal use of the word 'virus'

Real estate is not the only industry in Florida to be suffering from an economic blight. While the Sunshine State ranks as one of the foreclosure capitals of America, its huge citrus fruit industry is fighting a disease that threatens to devastate the orange business within a decade.

Bleeding canker of horse chestnut on the rise continued