Any new film version of a Shakespeare play is always welcome, but this announcement from the Guardian sounds particularly interesting:

The Oscar-winning actor Anthony Hopkins is to play King Lear in a new film version of the Shakespeare tragedy, it was confirmed today.

The film will feature Gwyneth Paltrow, Naomi Watts and Keira Knightley as Lear's three daughters, with more big names to be revealed soon, according to the director, Joshua Michael Stern.

"The one thing that I'm staying away from is stunt casting," said Stern, "so there won't be the American comedian, but there will be some really great actors playing smaller roles that will make a lot of sense."

Despite Stern's background - he's scripted episodes of Law & Order and Chicago Hope - he insists he won't be meddling with the original text. "I'm not very fond of the modern adaptations," he said. "It's pre-Roman, Celtic, very raw. It's a period in British history, from which Tolkien took a lot of his inspiration, where there were thatched-roof roundhouses and fortresses."

Stern's previous directorial efforts have been limited to a couple of comedy shorts: Queer Eye for the Homeless Guy and Jewz N The Hood, both shot in 2005.

Hopkins is said to be "thrilled" at the chance to reprise the role he played in David Hare's production of the play at the National 21 years ago in 1987.

Shooting is scheduled to begin in Britain or Ireland early next year.

Here's my analysis of the interesting things in this announcement:

It had to happen in a week of open-air theatre. The sun shone gloriously on Monday for Warwick Student Arts Festival's The Tempest, Shakespeare's Globe cast a cool shadow over the midday Midsummer Night's Dream audience on Tuesday and Footsbarn's tent protected the crowds on Tocil Fields from the elements on Wednesday. It couldn't last. Tonight, the heavens opened, and a severely depleted crowd sat in the ruins of Coventry Cathedral peering out from under umbrellas through what, as the night wound on, became a raging rainstorm that left us cold, wet, miserable and aching from the effort of holding onto our umbrellas. A worse night to be watching Shakespeare in the open air, barring snow or hail, would have been hard to imagine.

So, all credit to the brave troupe of actors from Shakespeare's Globe who, in the true spirit of touring, ploughed on through the downpour for two and a half hours and performed the best Romeo and Juliet I've seen to date. Using the pared-down dictates of touring to best advantage, director Elizabeth Freestone created a fast and funny production that succeeded in retaining the sodden audience to the end, which is no small testament to its achievement. Special mention goes to Dominique Ball who spent much of the second act wearing little more than a sheet yet didn't seem to shiver once.

A cast of just eight doubled the parts, making for some interesting moments; Conrad Westmaas, for example, doubled Capulet and Montague, meaning that he spoke both sets of reconciliatory words in the final scene, a neat touch visually demonstrating the combined grief of the two families. Peter, meanwhile, was shared out between most of the cast by passing around a brown apron, in one instance the actors even swapping mid-scene. The simple set (a flat square playing area with a battered '60s camper van parked at the back) was conducive to this playful approach, with the van providing the main entrance and exit points for most characters, giving the impression of a TARDIS-like space inside. Juliet made her bedroom on the van's roof, while the Nurse called for her while peeping through the curtained windows. It added nothing to the interpretation, but made for a fun and informal backdrop, and was well used for the Apothecary who became an addled traveller in a van full of drugs. 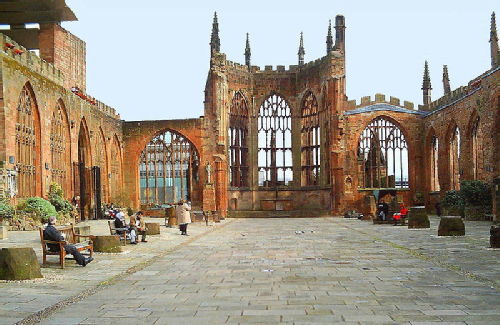 The ruins of the old cathedral in Coventry. The stage was set up at the far end, with audience on three sides around.

The play began in an appropriately informal manner, with the Prince making the usual announcement about mobile phones and paying a small tribute to the space, then walking away. Turning back, he said "Oh, and one more thing. Two households....". At the end of his prologue, the rest of the cast emerged in casual '60s costume (jeans, open shirts, light dresses and coloured bandanas/neckerchiefs to signify allegiance) and began a formation dance, which quickly descended into violence as the actors barged into each other and eventually started a full brawl. The text was effectively edited here, with snatches of shouted dialogue introducing the key characters without the long verbal build-up.

The acting was good throughout, and the actors had to work especially hard to keep up the energy, an energy not reciprocated by the audience who were generally quite unresponsive throughout, mostly from trying to prevent their umbrellas and blankets blowing away. Nonetheless, much of the production was very funny and still managed to draw laughs from frozen lips. Perri Snowdon was very amusing as Paris- he giggled like a schoolboy upon kissing Juliet in Friar Lawrence's cell, and turned up on the wedding morning strumming a ukulele and singing, only pausing to happily tell audience members "I'm getting married today!". The standout comic performance came from Nitzan Sharron's Mercutio though. Filled with a manic energy, this Mercutio wasn't dangerous or dark, stood by his friends (for instance, replacing Benvolio in a dance at the Capulets Ball on the point of Benvolio having to reveal his face) and took great pleasure in innocent mockery. He had a commanding presence, insisting on acting out his madcap monologues to the full. His death scene was particularly good; the brawl with Tybalt began with simple pushing until one of them took a harder punch than expected to the face. The jostling then began in more earnest, the two rolling on the floor while Benvolio restrained Romeo from intervening. Tybalt only drew a switchblade on the very point of re-entering the fray, stabbing quickly before putting it away and marching off quickly. This small thing was especially effective as Romeo and Benvolio genuinely had no idea what had happened, and it was only revealed gradually as Mercutio thrashed on the floor. His dying words were a mixture of angry shouts and pained squeals, he losing control over the pitch of his voice as he experience agonising pangs. Barely able to carry him, Benvolio finally escorted him off to die.

Both Dominique Bull and Marsha Henry made their theatrical debuts for this production, playing Juliet and the Nurse respectively, and both gave interesting performances. Bull was an unusually strong Juliet, both physically and emotionally, and there was a great deal of anger in her, particularly in the "Romeo, Romeo" speech where her frustration boiled up and saw her shouting at the stars. The dynamics of the Capulet household were striking, and the clear cause of this frustration. Juliet was an independently minded young woman lashing out against the restrictions placed upon her. Her father, meanwhile, bordered on the tyrannical in his organising of his daughter's life, and during the family argument he made as if to strike both wife and daughter, leaving Juliet cowering on the floor. Lady Capulet, played by Bridgitta Roy, was caught between the two people she loved. She objected strongly to the haste of the wedding, but was unable to articulate her concerns properly and was talked over by her husband, often reducing her to tears. Yet after the fight, when Juliet turned to her mother for support, she burst into tears again and stormed out, unable to take sides. This intriguing glimpse into the Capulets' home-life suggested a great deal of domestic strife, and explained Juliet's willingness to escape from her family.

While Bull's verse-speaking was occasionally not the clearest, this was nonetheless a good debut. Henry's was also solid, but here voice was the strongest point, Henry's excellent singing providing a score for moments both celebratory (a cabaret at the ball) and tragic (the discovery of Juliet's 'body'). Otherwise she gave a fine performance as the Nurse, combining a playful maternal care for Juliet with a fiery Caribbean temper that saw her fuming at Mercutio's jibes and chasing Romeo with murder in her eyes, to good comic effect.

The young lovers were poorly served by liberal editing of the final scene, which ran all of the events in the crypt together in quick succession and felt very rushed. Admittedly, this may have been the sodden actors understandably sprinting for the finish line, but either way it was a disappointing finale to the love story. Elsewhere, the leads did good work and created a largely convincing romance, particularly in their first meeting where tentative awkwardness dissolved into a passionate kiss which left them both gasping. By an extraordinary stroke of serendipity, at the exact second that their masks were lowered and their eyes met, the cathedral bells chimed out the hour. While the balcony scene dragged a little, the morning "Wilt thou be gone" scene was pacey and heartfelt, Romeo climbing down the side of the van from the roof which doubled as Juliet's bedroom. Alan Morrissey provided some good work as Romeo, matching Mercutio for energy in their shared scenes and at other times sharing his wistful casualness with the audience. His melancholy was worn fairly lightly, and he was always ready to burst into a passion of anger or love, yet restrained them with calmness.

The final image of the play saw the two lovers lying still on a table under the glow of fairy lights that extended from the van. The rest of the company removed their bandanas and wristbands, laying their colours over the pair and sheltering them from the rain with their combined family emblems. It was a nice final image, and the shared grief was affecting. By this time the rain was torrential, which fitted the mood and gave an affecting atmosphere to the scene. It's testament to the cast that they kept their audience (which unfortunately depleted during the interval) entertained and in the space until the end and, despite the elements, gave the best Romeo and Juliet I've seen to date. Considering the conditions, this was a performance all involved should be proud of.

A version of this review is available at Shakespeare Revue.