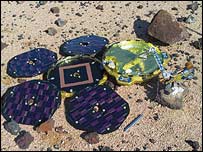 feeling bad for miscalculation is one thing, but explaining to the board of advisers why your experiment went under is quite another…

At the end of 2003 Beagle 2 had been released by the Mars Express ship into Martian atmosphere. Contact was lost and the probe was never recovered. A number of reasons were suggested but the most prominent of all was the misjudged atmosphere. New study (those of simulated nature) re-assessed possible fates of the Beagle. Calculations are to be compared to the new report and therefore nothing can be drawn out of it at the moment. a lot of explaining has to be done.

perhaps the miscalculation was in the fact that beagles can’t fly ;)