“These foils have all a length?” Hamlet – as used in The Prisoner episode “The Schizoid Man” #‎Shakespeare400 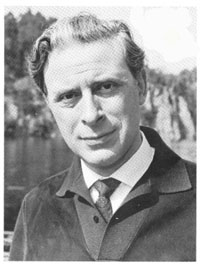 Two of my favourite TV shows are Patrick Mcgoohan's "The Prisoner", and the early 70s show "Children of the Stones"  which featured the real life stone circles of Avebury. I now have the wonderful opportunity to celebrate both those shows in August at an event being held in the wonderfully weird village of Portmeirion (where many of The Prisoners exteriors were filmed) at which Prisoner and Children of The Stones Director Peter Graham Scott will be speaking (he also directed many Dangerman and Avengers episdoes).

More details on this event for anyone else with an interest in such great 60s and 70s TV at:
http://www.theunmutual.co.uk/
l

Jack, our toddler, is getting around to speaking now and it is interesting to me to note how he uses words. It would appear his two favourite words are:

Bubble: Which is used of course for bubbles which are one his favourite things which he finds quite magical. However Bubbles is also used for anything water based he comes across in the real world as he cant say water yet  but he clearly also sees bubbles as a sub set of water  he says bubbles if he sees them depicted on TV or in a picture but does not use the word for water if he sees it depicted rather than in real life. Very occasionally he will also simply say bubbles spontaneously if he sees something that really makes him happy.

Well here we go with my first posting to my own blog – there is an obvious origin to the title of my blog that any Google search will throw up – but a slightly less obvious other occurrence of the phrase which I explain next week if no one works it out in the meantime.