All the memories of college life just came back to me reading Ying Ci's blog entry about some of the silly things we did in college.

I was sent to this college which was in the middle of nowhere after I finish Secondary School. It was surrounded by palm trees. It was a Muslim boarding college with very very strict rules. If you get caught breaking any of the rules, you are not allowed to go home during the weekend and have to report to the warden every other hour just to sign a stupid sheet of paper during the weekends.

There were curfews for meal times and every other thing. For those of us whose home is like far away from this isolated place, we had no choice but to spend the weekend in college where we were only allowed to go out either on Saturday or Sunday depending on the timetable. Yes there is a timetable. If Boys' outing day is on Saturday, Girls' outing day will be on Sunday. And it alternates every week. Because of this , we even have to get special permission to go to church on Sunday. These are but some of the many stupid rules that the college imposed on us.

And we weren't allowed to leave the college during weekdays. How confined and trapped I felt then. I came from a modern little town and my parents never imposed any curfew on me. They trusted me to be responsible. But here in college, I was 17 and was being treated like a 7 year old. I was always feeling home sick. The food was awful (there were loads of flies around the canteen..) but I kept reminding myself that I should not complain cause it really wasn't too bad and it could have been worse. There was no hot shower and I dreaded showering in the cold water in the early hours of the morning. The nearest town is like 30 mins bumpy bus ride and it doesn't even have a cinema. Ok I am a spoilt brat to a certain extent, I couldn't stop complaining during the first few weeks I was there.

There were people who quit after a while. I did IB for 2 years in that college. It was a culture and environment so different from the one I was brought up with. Life was not easy there with all the rules that everyone regardless of gender or religion loathed. But it did make a stronger person out of me. I made some really good friends who made life there so much better. Since we can't break the rules, we learnt to bend them and laugh at them. Though most of the students were Muslim, everyone regardless of race or religion got along well and I believe we are all just human despite our differences in beliefs. And I was fortunate to have some of the most dedicated teachers who are passionate about their job and care for their students like their own children.

The moments that I really cherish during my 2 years of study there is going to this really small run down chapel on Sundays. Even though the members of the parish are mostly poor, they showed strong faith and some have touched me greatly with their kindness. They lead a simple life of deep faith.

I believe God sent me there to learn and to appreciate the little things in life that I so often take for granted.

Never expect aspirations will be fulfilled,
But only wish that there is sufficient courage to face reality.

Never seek for healthiness,
But only wish that there is wisdom-filled vitality and an unfailing loving-kindness.

Never hope to lighthen the burden,
But only wish to have greater strength to shoulder all that have to be done in this world.

I made this for diner yesterday after coming back from the gym. It is called 'Kuih Dadar', pancake wrapped with coconut floss. Really yummy with ice cream. Half the recipe cause was afraid it will not turn out well. Will make more next time cause it is easy and yummy. 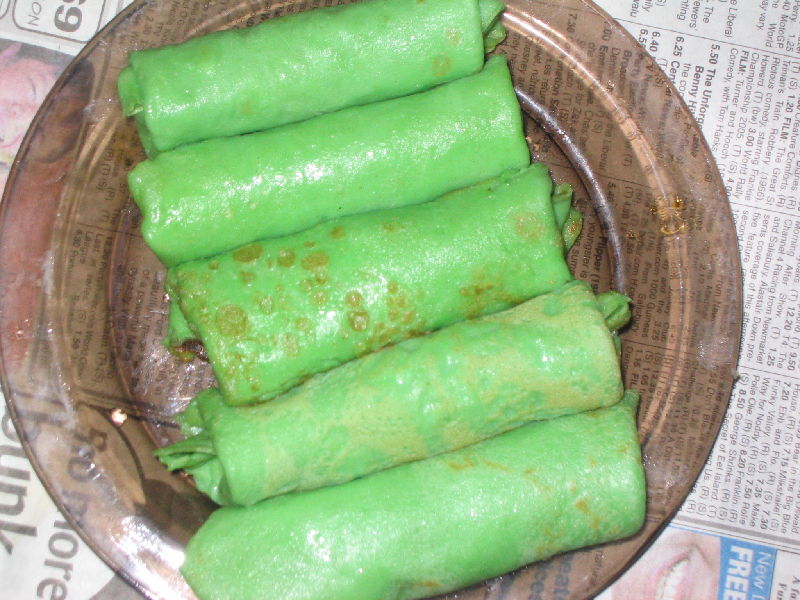 So tempted to make scones this morning when I woke up. I think I am addicted to cooking and baking. Realized I have got hell a lot of work to do, so had to drop the scones idea till later…later…