How to run a University?

The University: An Owner’s Manual

Very interesting set of insights from former Dean of the Faculty of Arts and Sciences at Harvard. Some wonderfully pragmatic and blunt tips aimed in particular at those academics who find themselves in senior management positions.

I found it pretty difficult to disagree with the sage advice herein although the references to Oxford were overly generous in terms of its managerial self-sufficiency and the assertions about the need for all senior academic administrative staff to be appointed rather than elected were inadequately defended.

Although the coverage of the student experience is very US-oriented, the sections on academic life and governance are extremely well done.

Overall, the style is relaxed and yet insightful and punchy, born out of many years of toil at the decanal coal face. Well worth a read.

How to run a University?

The University: An Owner’s Manual

Very interesting set of insights from former Dean of the Faculty of Arts and Sciences at Harvard. Some wonderfully pragmatic and blunt tips aimed in particular at those academics who find themselves in senior management positions.

I found it pretty difficult to disagree with the sage advice herein although the references to Oxford were overly generous in terms of its managerial self-sufficiency and the assertions about the need for all senior academic administrative staff to be appointed rather than elected were inadequately defended.

Although the coverage of the student experience is very US-oriented, the sections on academic life and governance are extremely well done.

Overall, the style is relaxed and yet insightful and punchy, born out of many years of toil at the decanal coal face. Well worth a read.

Really, really important for effective management in HE?

Was mildly diverted and perplexed by the following post to the Admin-Planning mailbase:

At XXXX University we are currently developing a Decision Support/Business Intelligence system to provide strategic management information to all levels of decision makers. We are, at present, rolling out a BI Toolset which allows users to produce and share trend based analysis, KPI’s through a web based environment. Part of the toolset includes the ability to disseminate information through subject specific Dashboards whilst still maintaining the ability to further analyse it.

Leaving aside the jargon and split infinitive the bit that I find most surprising is that this system is provided to “all levels of decision makers”. All levels? Does this mean that everyone who takes any kind of decision (eg baked potato fillings on Thursdays) needs their own Dashboard?

Sometimes these things go just a little too far!

The massive survey shows that:

Students increasingly own an expensive range of personal items such as MP3 players, iPods, laptops and widescreen televisions, a survey suggests. In 1996, students had possessions worth £1,900, compared with £2,900 now, the poll of 587 students indicated.

Nearly two–thirds of those surveyed by YouGov owned laptop computers, more than half had MP3 players, 48% owned DVD players, 12% had widescreen TVs and 6% owned PDAs.

But then it is followed by a staggering piece of misinformation:

The findings come as students starting courses this autumn will have to pay up to £3,000 a year on tuition fees alone.

Implication – silly students are blowing a fortune on electrical goods and won't be able to pay their fees. Oh dear.

What makes a good administrator? (All comments welcome)

Am presenting a session at next week's Warwick Network on this particular topic. Now I do have plenty to say on the subject but was interested in what others might think.

Am especially interested in relation to the issue of the adoption of or engagement with (or indeed comprehension of) new technologies etc. So, does a good administrator have to be in the vanguard of IT developments or is it simply enough that s/he is comfortable leading or embracing change, whether in IT or anything else?

And is there something different about University administrators?

Management issues in the NHS

Whilst it is wrong to derive any satisfaction from this Audit Commission report, it seems bizarre that there remains a view (at least in parts of the Treasury) that universities are run as badly as parts of the NHS. Yet, there aren't many insitutions which would survive for very long with these kind of problems – and some of the findings in this about management problems in the NHS are really quite staggering:

We found that the origins of financial failure in the organisations we reviewed typically lay in ineffective management and weak or inadequate board leadership. The report identifies three crucial aspects of board–level culture that suggest trouble may be ahead: inadequate calibre of leadership, particularly in the key posts of chief executive and finance director; lack of board cohesion and inability to challenge, frequently compounded by a high turnover of board directors, both executive and non–executive, impeding the board’s ability to work effectively as a team; and the board’s eye being off the ball. We found this typically meant the board had other time–consuming business: the after–effects of a merger (or the preliminary stages of the next one), a large building project, responsibility for a shared service or consortium, or any combination of these.

These factors were often compounded by weaknesses in the information available to the organisation, particularly in financial monitoring and the forecasting of the year–end position.

Some boards surrendered to the view that the problem lay elsewhere within the local health system, usually on the other side of the commissioner/provider divide. Others looked for future funding increases to resolve their difficulties, with some NHS trusts believing that Payment by Results (PbR) will mean significant and justified income growth even if it is known that the local commissioners also have a deficit. The effect is for the organisation and its management to believe they are not in charge of their own destiny, waiting for external solutions rather than searching out internal improvements.

This, arguably, is analagous to the attitude of some HEIs – but in the mid–1980s, rather than now!

Even where boards operate better, operational problems were separated from financial ones with the finance director expected to solve them. Increasingly, this led to a reliance on short–term fixes: asset disposals, slippage and the use of non–recurrent funds to cover recurring (and growing) deficits, and borrowing from other NHS organisations. Finance directors rose to the challenge, but the results were damaging in the medium term with underlying imbalances not being addressed. Financial problems are operational ones. They require cost structures, service design and productivity to be addressed in detail.

We also found, among this small minority of organisations we reviewed, a tendency for the medical leadership and other senior clinicians to be disengaged from the core management processes of the trust. This dislocation, if allowed to continue over a period of years, appears to be a reliable indicator of impending financial trouble. It is, after all, clinicians who spend most of the NHS’s money.

The obvious analogy here is with problems faced where you have academic staff being disengaged from central University activities.

Anyway, a desperately depressing read in many places but at least we can feel a bit better about the calibre of management in many universities. If only parts of government would see it the same way.

Day 2 concluded wonderfully with excellent session on autonomy v accountabilty in HE from Nigel Norris and a sale of my book (every one counts!).

Day 3 just as good with first rate presentations from John Field, Ron Barnett and Nick Barr, all followed by a really good dinner.

I do wonder though about the description of the menu as featuring highlights from the cuisine of the West Midlands – still sounds strange.

OK, so yesterday afternoon, following the opening of the conference, we had two really rather good sessions on the Leadership and Management strand. First up were Ewart Wooldridge (Leadership Foundation) and Jon Baldwin on leadership in HE. Best bit was a very apposite quote from Adlai Stevenson (which I had not heard before):

It's hard to lead a cavalry charge if you think you look funny on a horse.

After that we had Lars Ekholm on the Scandinavian experience of academic leadership – very interesting stuff.

First session this morning – Strategic Management in times of uncertainty – was delivered, with some style as ever, by Mike Shattock. A very helpful reminder of the way we do things here…or at least try to.

It's all a bit blurred (already) but opening session of the AC21 International Forum here at Warwick has gone extremely well. A really stimulating and insightful presentation by Georges Haddad of Unesco has got us off to a flyer!

The photo – apologies, it's appalling – is of President Hirano of Nagoya University, delivering his opening remarks. 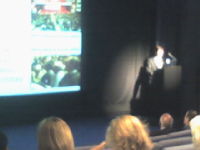