Have always speculated about this ever since hearing about how Flock of Seagulls got their name. Limited list to date is:

Darwin was right (not exactly news)

(Still catching up on some recent reading…)
I'm not a great fan of the popular science section in the bookshop but thought that I should give Dawkins a go given how impressive he sounds on the radio.

This one does not disappoint as a straightforward yet extremely cogent – indeed masterful – presentation of the Darwinian view. Lots of wonderful vignettes which explain evolution articulately to the lay reader (ie me). The best bit though is a very direct challenge to the 'science is just another viewpoint' gang:

Show me a cultural relativist at thirty thousand feet and I'll show you a hypocrite. Airplanes are built according to scientific principles and they work. They stay aloft and they get you to a chosen destination. Airplanes built to tribal or mythological specifications such as the dummy planes of the Cargo cults in jungle clearings or the bees–waxed wings of Icarus don't.

A neat and quite entertaining follow up to 44 Scotland Street, again produced originally as a daily serial for the Scotsman. It follows the lives of a small and diverse group of inhabitants of this address in their somewhat, but not excessively, taxing existences. Some nice little tales of a nudist picnic, an insufferably vain ex–surveyor turned wine merchant and pushy parents and their pushed prodigy, little Bertie.

The episodic approach works extremely well for holiday reading and the characters are sufficiently engaging to keep you involved. Light but not completely slight.

On a recent holiday to Italy, stopped in a motorway service station which sold a lovely range of local wines. Bizarrely, the labels on the bottles featured famous individuals, mainly from the world of politics (in its broadest sense). Amongst those pictured: 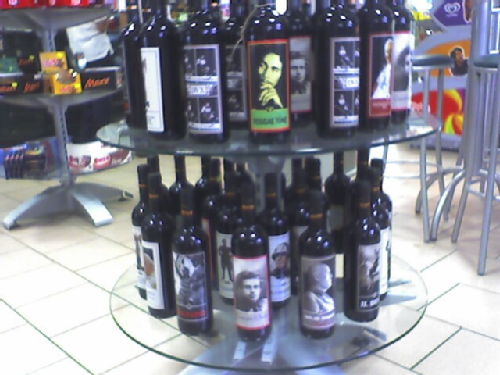 But the oddest thing was that the most popular depiction was of Il Duce himself. There were at least four different representations of Mussolini, mainly in military garb, including one particularly attractive shot of him sharing a platform with Hitler.

Having read a couple of other Murakamis I felt I knew what to expect here – morose quasi–philosophical musings on love, loss, death and loneliness – and it doesn't fail to deliver. The setting is different – Watanabe is a student in late 60s Tokyo and there are student riots and dorm–based craziness in the background – but the feel of the novel is pretty similar to the Murakami norm.

Having said that it is a not uninteresting and reasonably entertaining read but, as one critic has put it (OK, my hyper–critical friend, Steve) absolutely nothing of any consequence happens. To some (including Steve) this is something of a minus but I can't say I was that disappointed by the lack of real action.

However, I do have to say it is not a patch on 'Kafka on the Shore'.

Our own campus mobile network?

This seems like a terribly exciting idea – I just cannot work out whether or not it is really at all viable or whether it would work here.

"What you see every company doing now is taking what they do well and porting it on to a cell phone or PDA. We have put out a number of tenders and we hope to give first–year freshers a free cell phone or a more expensive smartphone each." Siff sees it as a roadmap to the future: the university provides free phones and funds a third party to supply the network for which the students pay a monthly rate. "And if we get over 3,000 students signed up within six months, we'll break even."

There's one big problem. Almost every student has their own cell phone and provider, so why change? Siff replies that, if you use just one provider, it cannot guarantee you coverage everywhere. But his Cincinnati service is guaranteeing a high 90% coverage.

It seems that our Graduation ceremonies actually have a lot going for them – better than this description of Harvard in any case. 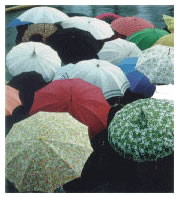 The morning graduation exercises were held in a steady drizzle, with hundreds of umbrellas making it impossible for those stranded in the back to see anything. Then, that afternoon, when outgoing (purged) president Larry Summers and venerable newsman Jim Lehrer took the stage for the big Ciceronian round–up, the powers–that–be decided to hold the event indoors to keep the alumni from catching a chill, again condemning a sea of graduates and their waterlogged parents to tread water in the rain. There, those not being treated for pneumonia or hypothermia could watch the speeches on TV monitors.

And every one is pooped.

See photos from the morning via this link

Well. Senior officers are all rather hot and sweaty but doing very well. We are pretty much ahead of schedule and looking forward to lunch. Photos will be on insite soon I fear!

Signs of the times

The first on a van dropping off at University House: 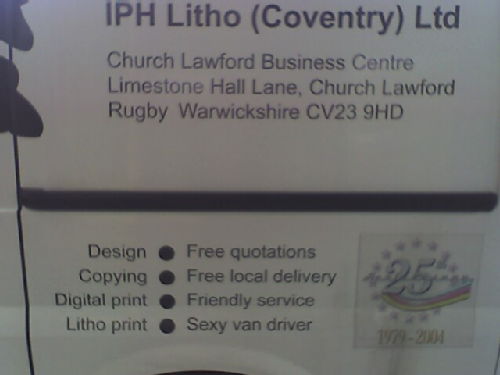 Nice try but, objectively, driver would have found it difficult to match the claim.

The second at a lovely hand car wash venue. No hint of menace in the environment. Definitely no hint at all in the notice… 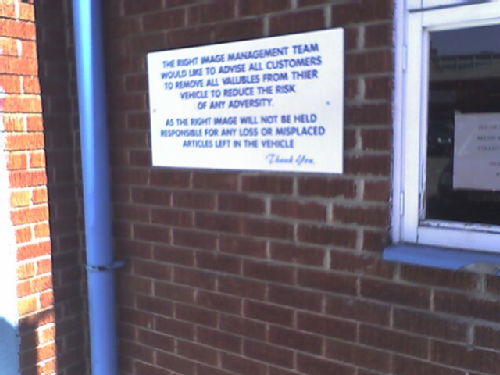 Only one spelling mistake though – and a nice cheery 'thank you' at the end!