This article largely speaks for itself 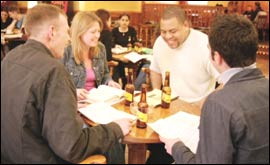 A survey of more than 1,970 school leavers across the UK showed that students estimate they will spend an average of 186.30 per term on alcohol. In reality, the cost is likely to be 274. They also underestimated how much they would spend on clothing and mobile phone bills.

But that isn't such a huge gap really – less than a tenner a week.

The Royal Bank of Scotland (RBS) financial realism report, published today, reveals a "startling knowledge gap among this year's sixth–formers". Students were asked to estimate what they thought they would spend at university on a range of essential and non–essential items, including rent, books, food and going out.

It is actually pretty difficult to estimate this kind of stuff though. And. given that they have done it by insitution/location, they are talking very small samples for each sub–grouping:

Students hoping to study in Manchester, Nottingham and Edinburgh are best prepared for their looming financial commitments, but students who have applied to study in Aberdeen could be facing a huge spending shock, the research found. The average Aberdeen applicant estimated they would spend about 2,519.90 each term on living and housing costs. However, the bank's data indicate those students are actually likely to spend 3,180.50 – 660.50 more than they expect.

Fortunately for the Aberdeen–bound, their parents will fill the gap:

The research also revealed that students about to start their first year expect to receive a total of 442m in financial support from their parents, which equates to an average 773 each during the 2006/07 academic year

No problem there then! But this really is pretty feeble stuff.