This is actually the first play I’ve seen directed by Peter Brook. Brook is famous for his minimalist approach, which was certainly in evidence here – although I have to say that I can’t think of any other way that this play might be staged, and would like to see some more of his work to get more a sense of what makes his style so distinctive. His _Sizwe_ had some great distinctive modern touches though, and the fact that it was in French helped to bring out the universal theme of racial oppression that can sometimes get lost when too much emphasis is placed on the play’s historical apartheid context. 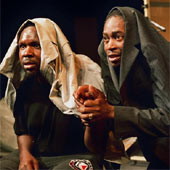 Habib Démbéle was great as Styles/Buntu, and brought a great variety of physical quirks to his roles, particularly excelling in the comical portrayal of old men. I did feel at certain points though that the play relied too heavily on physical narration of his monologue, which made the pace drag slightly, gifted though his performance was. I also thought sometimes that his habit of putting different voices made it difficult to distinguish moments where his character exploded with genuine anger or exasperation, because it sounded like yet another caricatured performance. Pitcho Womba Konga was striking as the simplistic, embattled Sizwe/Robert, a man struggling to come to terms with the fact that he must forsake his identity in order to continue surviving under a racially oppressive regime.

There was a nicely self-referntial moment where Buntu pretended to be the factory manager paying out fares to his various workers, beginning his long list of names with John Kani and Winston Ntshona – the two legendary actors who devised the play with Athol Fugard (and starred in the original). One of the most effective moments was when a drunk Sizwe started protesting at his right to retain his identity. Played it with a great mix of pathos and very palpable anger, drawing some nervous laughs from the audience when he approached a white woman in the front row and started shouting about his rights.

For me the production was strongest when it brought out the parallels between apartheid and the modern moment, confronting the audience with the fact that what should now be an example of heritage theatre is still pressing today. Having seen two productions of the play it this year, I’m inclined to think that, although a good play, it’s not quite as powerful a piece of writing as The Island, but this was a worthwhile experience nonetheless (and fantastic value for Warwick students at £5 a ticket on Student Standby!).