Now we start counting the hours!

Tomorrow, we are perfoming at 12 and I think we're nearly sorted. We have a few hours tomorrow morning to get everything straight then we're done. We are yet to run the whole thing in sequence, but as our production isnt really a performance I dont see this as a problem We basically spent all of today setting everything up. We were in for the later session so we decided to set up the studio for tomorrows performance as we are performing 1st. We, however did not realise the other group were going to be coming back in at 1 and we feel this may have caused a bit of tension, but hopefully we are all adults and can simply see this as a break down in communications rather than an evil act of sabotage, we are all the same class afteral, and I hope nobody forgets this.

Anyway, during the time when the ther group were practicing, myself and ricardo decided we didnt need lunch (lunch is for girls ;) haha! inkeeping with our theme) and tried to somehow get Ian and Rhys' video onto a DVD with ours. Ian then joined us and despite a few foul ups we got it sorted.

After this we went back into the studio to finish setting it up, and it is VERY impressive (pictures below). It is nice to be given such creative freedom and freedom to resources. Something I feel we havent been given in the past with other aspects of practice work.

here are some pictures: 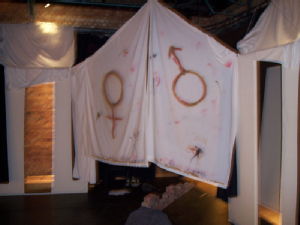 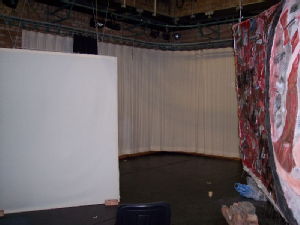 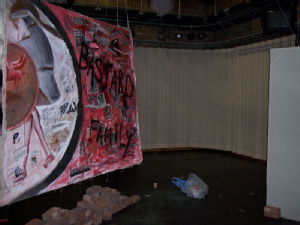 On Wednesday of this week, the film and performance group went out to film a test reel on my little 1CCD camcorder just to get a general idea of what locations would work and how.

This achieved several objectives. Mainly it enabled myself, Ricardo and Rothwell to story board the film project so that all we had to do Thursday was get the equipment [the departments very nice Panasonic DVX100 and 700 series Manfrotto tripod with if I'm not mistaken a 501 Manfrotto head] and just go out and film. We did this very succesfully and despite a few scenes we are done. We need to book studio time next week for the dialogue scenes and then next Thursday we will crack on with the editing on the very nice Avid Editing Machines they have in the dept's editing suite.

The group were a coherant and well oiled unit I felt during the filming process, I do feel however I may have been slightly over bearing as a cameraman as I have a passion and knowledge of camera operation. But I think everybody who wanted to had a chance to be involved in both technical and peformance aspects of the film making process. If I offended anybody in my group by 'taking control' I sincerely apologise.

Before we went out filming on thursday, we had a discussion about the possibilities of a Male Vs Female theme throughout our piece and both groups [male group and a female group] made up lists of things about the opposite sex that annoyed them. The results were both heated and interesting. And we strived to incorporate the finding into our film.

I'm saying sorry for the delay in posting this, but it was due to an unexpected error in accessing the Warwick Blog.

Anyhow, we began today's session with a whole group meeting in an attempt to give some direction to the whole project. This was due (in part) to growing worry that the different groups (within our group) will contradict each other. The general and deliberately vague theme we have chosen is Gender. The other choice was the Myth I have discussed in my last blog entry.

Some of the separate groups within our groups are working directly with each other [I.E. The Film and Performance element]. It was decided that we wanted to contemporise the original play. This is to show a relevence between Medea (the play) and a modern day audience. One of the main ideas we wanted to use to depict this are transitions between Medea (the character) and Jason as well as any other characters. The way we play on doing this is by for example:

This does not apply exclusively to the characters I have mentioned. I also like the idea of simply using members of the public in an attempt to bring an element of relevance to the piece. The rough foundations for this idea came from a comparison to the videos played at Alton Towers whilst waiting to ride 'The Oblivion'. There is a video of a man speaking and then a brief flash and a different person replaces them.

Whilst discussing various ways of filming and mood we wanted to create, one common ground we kept returning to was the macro shots employed in Darren Aronofsky's Requiem For a Dream. For those of you who haven't seen the film or who aren't aware of what macro shots are, they are a series of short shots which represent a certain action that could take a long time. In Requiem For a Dream, the cinematographer Matthew Libatique uses a series of shorts to represent drug use (i.e. heroin boiling on a spoon, pupils dilating etc.) Matthew Libatique also incorporates very pronounced noises so that it is a very rhythmic experience. We are thinking of using this technique especially during the murder scenes that we will incorporate in the film.

We are also considering using a chiascuro lighting effect as used within the film noir genre. This is an effective tactic to show short snippets of light and action. This will hopefully be effective and helpful as we are working with a very small budget.

Myself, Rothwell and Ricardo went location hunting after Friday's session, paying particular attention to the maths building and university house as both buildings have pillars but are both very modern. This in our opinion would be ideal for contemporising a Greek play as there is the suggestion of Greek society with the pillars however the structures are very modern.