Anybody who's from South Wales, or in and around the Swansea area needs to see this film if they haven't already! An all star Welsh cast with Rhys Ifans[Notting Hill,Little Nicky] , Llyr Evans, Morgan Hopkins[Very Annie Mary] as well as nearly anybody who's ever been on Pobl y Cwm and Pam Fi Duw?. Not to forget Dougray Scott [MissionImpossible2, Deep Impact] playing the dodgy Copper, Terry Walsh.

It's an accurate portrayal of life in the South Wales valleys, filmed in Swansea, Port Talbot and Neath it's a must see for anybody with ties to the area and is bizarre watching a film and knowing where they are.

It's a story of drug use, murder, revenge, prostitution, rugby and karaoke.

Ifans: Why is it a 2 litre bottle of coke costs 27p?
Evans: Super-duper deal
Ifans: Aye, but a 1 litre bottle costs 37p?
Evans: That's f***ing weird, cos you's paying less for more like
Ifans: I knows
Evans: Why's that then?
Ifans: I don't know, it's really f***ing weird!

A must see for anybody! 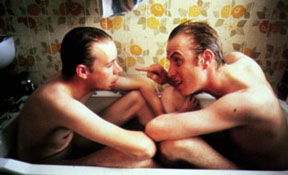