Thanks to a huge tip off from the legend that is Dr. Roger Tribe, I have found the preliminary lecture list for mathematics modules next year on the PYDC section of the department's site! I advise you to take a good look before reading further!

I'm a third year in September so I will be talking about 3rd and 4th year modules in this entry. But if any 2nd years are reading and want to know about my opinions on 2nd year courses I am happy to give them.

To be honest, I still don't really know what I'll be taking next term! I'll be staying clear of algebra though. I don't get on with that very well! It's too early to think about 2nd term modules too. So, lets focus on next term. I was considering taking Continuum Mechanics but now I'm thinking that it won't be as enjoyable as I first thought! I will definitely be having a go at Measure Theory. It's a shame they haven't yet arranged a lecturer for that. Modern Control Theory looks really interesting too! Ill have to turn up to that. Got to take two MA4XX modules! I am so not looking forward to those. I'm no chef, (In fact I hate them mainly because my ex-girlfriend ran off with one!) but I will have a go at Mathematical Recipes. I think I'll get on well with that one. I think I'll also check out Stochastic Analysis. However, I've been told that it is a very hard module. Is there anyone out there who could give me their opinion on it? I would greatly appreciate it.

Run for your life!

Oh my gosh! No joke or a lie, yesterday I experienced the scariest moment of my life and for a few seconds, thinking that I might die dominated my thoughts! Let me tell you more! 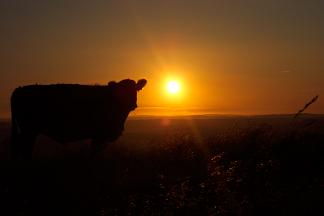 Yesterday was a beautiful day in Great Malvern. The sky was completely clear; not a cloud anywhere. A day so perfect produces a beautiful sunset, so I walked to the top of the hills to snap it. I already knew there were cattle grazing on the hill and was determined to capture the silhouette of a cow in front of the orange sky as shown to the left. The cows were grazing on a patch of the hill enclosed by an electric fence. The fence is designed to keep the cattle in. Walkers are allowed to enter the enclosure using the gates. The cattle are meant to be docile however you are warned not to get too close to them. So what did I do? Yes I got too close to one of them. It turned around, looked me in the eye and then started to run at me. In that split second I could see that this cow was not happy. As I looked back at it I saw the rage in its eyes! This powerful beast was running towards me and wasn't going to stop. I basically started to shit myself big time. I turned around and ran as fast as I could down the hill towards the exit of the enclosure. A good fifty meters! All the time I could hear and feel the cow behind me getting closer and closer. Luckily I was able to hurdle the gate to safety on the other side of the electric fence just before the cow caught up with me. Goodness knows what would have happened to me if I hadn't made it in time. I definitely wouldn't be writing this entry that's for sure! So yeah I'm never going in that cattle enclosure again! It's just not safe in there. I'd liken it to the raptor enclosure in Jurassic Park! 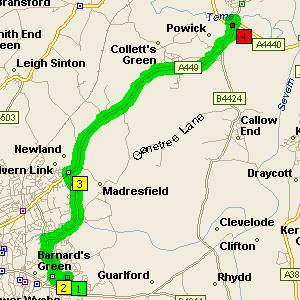 The Coventry Half Marathon is now less than 3 months away so with a cool breeze in the air I thought this evening would b the perfect time to start the training. My aim is to run it in under 1h30.

Although it's been over 2 years since I ran London, I thought it would be a good idea to plunge into the deep end and do the 13 mile distance straight away. As the map on the right illustrates, the run from my home in Malvern to the Powick roundabout on the outskirts of Worcester and back fits the distance perfectly. And with a cruel climb back up to the Powick Hill just after halfway, it provides a challenge which most road half marathons do not.

Well good news! I did the run in 1h39 so it seems a reasonable challenge to aim for 1h30! Lets hope I can keep the training up and I do not pick up injuries!

Ooo, It Never Is! 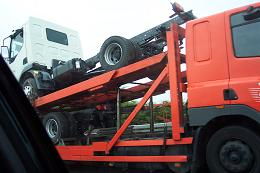 So today I gathered together my final few belongings, packed them into my dad's car and left uni for home (Great Malvern)! Sad? Not really! I could do with a break.

Yeah anyway the point of this entry is to say, wow! Whilst traveling home on the M5 what did we pass? Yes that's right! Nothing other than a lorry carrying other lorries! I mean you see lorries carrying new cars all the time, but yeah lorries must also have to carry other new lorries around the country to places which sell lorries! I bet that has never even crossed your mind before and if it has you are a genius! So yeah this scene was so unbelievable I just had to whip out my camera and take a snap and blog it! I suppose this is truly what blogs are for!

So yesterday saw the end of my exams! What a relief! The last 10 weeks have been among the worst ever. So much stress, so much hard work. Now all I want to do is forget about maths for a while. Over the next 14 weeks I am conducting a detox to clean my head of all mathematical thought! No thinking about maths whatsoever! 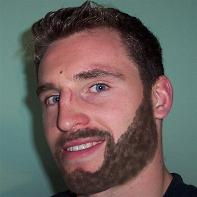 Well first of all I should say that both Vector Analysis yesterday and Metric Spaces this morning went well. Finally some exams that I have come out of feeling good!

Secondly I have been wasting time this evening by drawing beards on pictures of myself and my friends. The picture on the right is proof of why I shave every morning. It's great fun! You should try it on pictures of your friends. You can do it in almost any graphics package, even Microsoft Paint! Just use the spray can! I've been using some crappy photography software I got with my pc to do it. I think Photoshop will give the best results though. 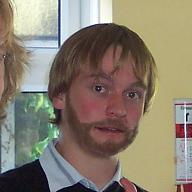 My best result was on this picture of Dave, my housemate (left). He's looking pretty cool man. It's now hard to imagine him without a beard. It almost looks like he actually has one! So yeah that's how I've wasted this afternoon! Oh well. I've got 3 exams left now! 2moro I will be doing some hardcore Mathematics of Random Events revision for the exam on Monday as well as going for the ultimate 1 hour row 2moro morning.

I love it when I'm right and in this case I am. Today's exams were shocking. Well Differentiation wasn't so bad although I had to think on my feet a lot. There maybe a chance that I scraped a first in that one if I am really lucky. But as expected Applied Analysis was a complete joke. I will be delighted if I get the 35% to pass it! Professor Mackay is obviously a genius. You just have to look at his website to see that. He's not stupid so he must know that the exams he sets are way above the required standard for the second year of this degree. So why does he do it? One rumor is he is trying to find the real geniuses on the course so he can wrap them in cotton wool and look after them. Another rumor is that he sets the exam at the same standard as the exams at Cambridge. Well if that's the case thank goodness they didn't want me!

I will drink my urine if 2moros exams go well for me!

Why is maths so fucking hard! 2day I've understood loads of theorems and their proofs for differentiation and applied analysis but there are so many more that I haven't had chance to look at. There is so much to learn! I guarantee that none of what I have revised over the past weeks will be helpful 2moro when I do the exam. If the exams go well I will drink my own urine in celebration! No really I will because I am that confident that they won't.

Running Out of Time!

There are only 2 more days of revision left before Differentiation and Applied Analysis exams! Oh no! However I did have a good day with the differentiation 2day! I learned how to prove the Contraction Mapping Theorem so I just hope it gets asked in the exam. If Vasili is reading this, will you be asking it? What else will you be asking?

Thanks to Charlotte for being such an awesome revision partner, and thanks to Ant and his housemates for the awesome bbq this evening!

Big day in the gym 2moro! Fingers crossed for a good result! Pray I don't pass out!

Walk or Run Through Rain?

So yeah today was just another average day, revision and gym. But I must have looked like an absolute fool coz it was pissing it down with rain for most of the day and I was going around campus in shorts and shirt! What an idiot!

I spent half an hour in maths waiting for the rain to stop so I could walk home without getting soaked. Of course the rain wasn't going to stop so I consulted the internet so see whether it would be best to run or walk home through the rain. The internet said it would be best to run. I point you in the direction of the article above. This was just one example of a site telling me to run. Nevertheless being lazy I walked and didn't get that wet.

What do you think? Walk or run? Does it really matter? Surely you're gonna get wet whatever?