Tessera hospitalis: a gift for your guests

“Hospitality” was worthy of high, valuable consideration in the Greek and Roman world. It is not a coincidence that Zeus Xenios was the powerful protector of guests. The Greek word for hospitality was xenia, while the Romans called it hospitalitas. This concept was strongly sincere and implied a true friendship between the host and the guest. The latter could be a friend or a relative, who came to his host’s house for a brief or long period of time (fig. 1). Moreover, hospitality was considered a sacred institution. It was therefore based on serious rules and rituals. First, the host had to accommodate the guest respectfully. Second, the guest had to esteem his host, being kind and gracious while he was staying at his house. Third, hospitality established a mutual exchange of favours, reciprocal esteem and a series of gifts. Among them, the host could donate a tessera hospitalis (token of hospitality) to his guest.

This ‘ad hoc’ gift was prepared and personalised every time to testify that the hospitality was successful and to strengthen the bond between the guest and the host. We even know that the tessera might be broken in two parts, one for the guest and one for the host. Considering how heart-felt and widespread the concept of hospitality was, it is quite surprising that these artefacts seem to be quite rare nowadays. Two such objects are currently preserved at the Archaeological Museum of Madrid (1st century BC) (Saquette 1997: 420, n. 238) and the Museum ‘B. Anselmi’ in Marsala (Trapani – Sicily), ancient Lilybaeum (Trapani – Sicily) (2nd-1st century BC) (Salinas 1873: 53).

Antiquarians have been interested in tesserae hospitales since before the 19th century. For instance, Jacopus Philippus Tomasini (1595-1655) (fig. 4), Catholic bishop and learned historian born in Padua, even wrote even an entire book on these artefacts. Published in Amsterdam in 1670 and written in Latin, De tesseris hospitalitatis liber singularis (1670) (fig. 5) is a thorough 230-page essay that signifies Tomasini’s deep knowledge of Greek and Roman history and analyses the concept of hospitality through historical and antiquarian sources (fig. 6). 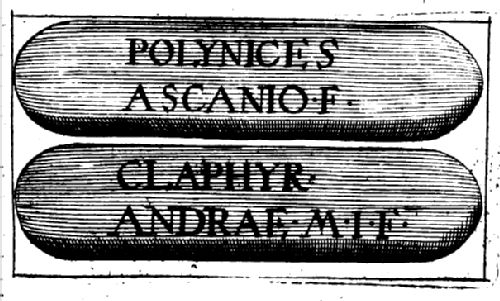 Why did Tomasini write this work? He began to seriously think about his essay (serio mecum cogitare coepi) when he was in Rome admiring its ruins. Although the concept of hospitality was not ‘directly’ shown by Rome’s major antiquities, a targeted study was lacking and therefore it was essential to collect all the antiquarian and historical evidence (Tomasini 1670: 1-3).

This blog post was written by Nino Crisa as part of the Token Communities in the Ancient Mediterranean Project. Nino is an archaeologist, numismatist and historian. His research and published works mainly focus on numismatics and the history of Sicilian archaeology and excavations, particularly on archival records, antiquarian collecting, the history of museum collections, antiquities safeguarding and legislation on the cultural heritage between the Bourbon and post-Unification periods (1816-1918).