Since the sixteenth century, a special and enigmatic late Roman token emission, the ‘Vota Publica’ series, has received attention from antiquarians, dealers and collectors. These tokens, produced in either bronze or brass by the Roman mint, depict the effigies of Roman emperors from Diocletian (AD 284-305) to Valentinian II (AD 375-392) on the obverse (called the ‘imperial’ series). Instead of an imperial image they might also carry the busts of Serapis, Isis, or Hermanubis (or the jugate busts of Serapis and Isis) (called the ‘anonymous’ series). A number of ritual scenes and images referring to different aspects of Egyptian and Isiac cults are shown on the reverses, which are mostly accompanied by the legend ‘Vota Publica’ (= ‘public vows’). Due to the distinctive Egyptian religious iconography of these artefacts, a number of drawings or engravings of the ‘Vota Publica’ tokens appeared in several books, catalogues, and other contributions from the sixteenth to the early twenty centuries. These drawings reproduce, sometimes with a good degree of accuracy, some of the types found in the existing material, although the precise identification of the depicted specimens remains debated in most cases.

Two drawings reproducing ‘Vota Publica’ specimens are known to this author as showing an otherwise unattested obverse-reverse type combination. These designs were included by Girolamo (Hieronymus) Tanini in the plates of his ‘Supplementum’ to Banduri’s volume ‘Numismata Imperatorum Romanorum a Trajano Decio ad Palaelogos Augustos’ (Lutetiae, 1718), which was published in Rome in 1791 (Fig. 1)(Numismatum Imperatorum Romanorum a Trajano Decio ad Constantinum Draconem ab Anselmo Bandurio editorum Supplementum, Romae 1791). In this volume, Tanini catalogued hundreds of gold, silver and bronze coins from the reign of Trajan (AD 98-117) up to until that of Constantine XI Palaiologos (1149-1453). Most of the specimens recorded by Tanini existed as part his own collection, but others came from other collections or were taken from different books and catalogues. Girolamo Tanini was a priest and erudite greatly interested in numismatics, who served in Florence for the Rinuccini family as educator of Marquis Folco Rinuccini’s children Giovanni and Alessandro, as well as curator of the library housed in Palazzo Rinuccini. In this role, Tanini was also in charge of the numismatic collection of the Rinuccini family, which was initiated by Folco’s father, Marquis Carlo Rinuccini (1679-1748). 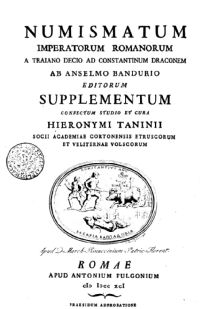 In his ‘Supplementum’, Tanini described around seventy ‘Vota Publica’ tokens from both the ‘imperial’ and ‘anonymous’ series, most of which were part of his own collection. However, he only illustrated six of these specimens. Two of them, belonging to the ‘anonymous’ issue, came from Cardinal Stefano Borgia’s collection (1731-1804), and were later acquired by the Vatican. The other four were part of Tanini’s collection.

Of these, two display the pearl-diademed bust of the emperor Jovian facing right on the obverse, accompanied by the legend D N IOVIANVS P F AVG COS, while on the reverse is the type of Isis seated facing on high-backed throne, suckling Horus-Harpocrates (Fig. 2), or the type of Serapis-Agathodaemon and Isis-Thermouthis facing one another, carrying a sacred vase between them from which a serpent emerges (Fig. 3). The tokens depicted in these two drawings, labelled as AE2 (‘secundae formae’), might be identified with two rare specimens bearing the same obverse and reverse type and legend and with the same diameter, which are currently housed in the Vatican collection. The other two drawings provided by Tanini depict the draped bust of Isis facing left on the obverse, wearing a basileion and holding a sistrum in her right hand, while on the reverse is the image of Isis standing right on a galley with oars sailing right. Although these images are widely attested in the available material, none of the surviving specimens show a combination of these two types.

In the ‘Supplementum’, Tanini placed these two tokens under the coinage of Helena, the emperor Julian’s wife (died AD 360). As was common in his time, Tanini considered the busts of Serapis and Isis displayed on these tokens as disguised representations of Julian (AD 361-363) and Helena, following the idea that the production of some of these token issues was connected to Julian’s “pagan renaissance”. Tanini’s description of the two considered specimens is as follows:

The first of the two specimens (Fig. 4) was labelled as AE3 (‘tertiae formae’) by Tanini. While the combination of the illustrated obverse and reverse types, with the legend VOTA PVBLICA occurring on both sides of the token, is not found in any of the known specimens today, it is worth paying attention to a similar specimen from the Vatican collection - Biblioteca Apostolica Vaticana (BAV) inv. no. Mt. Rom. Imp. Helena Iuliani 32. Although in a poor condition, this piece bears the same obverse type and legend as Tanini’s token, and the reverse also looks extremely similar with only one small difference: Isis has turned her head and is looking backwards (left), while on Tanini’s drawing Isis faces forward. It is tempting to assume that the specimen once owned by Tanini matches the Vatican piece, presuming that he misread the reverse type due to the poor condition of the token. However, no data on the acquisition of the piece by the Vatican collection is available. Moreover, the presence of a hole on the Vatican piece, which is not shown in Tanini’s drawing, may make this idea unlikely. If genuine, the piece described and figured in Tanini’s ‘Supplementum’ could provide evidence of an unrecorded ‘Vota Publica’ specimen.

The other specimen illustrated by Tanini (Fig. 5), labelled as A4 (‘quartae formae’), shows the same type combination of the previous piece, but it bears the obverse legend DEA ISIS FARIA instead of VOTA PVBLICA. As the available token specimens show, this legend was never used in the ‘Vota Publica’ series. Moreover, the obverse legend shown in Tanini’s drawing seems to incorporate two of the obverse legends found on the existing pieces with the bust of Isis, namely DE(ae) ISIDI (in the dative case) (Biblioteca Apostolica Vaticana (BAV) (inv. no. Mt. Rom. Imp. Helena Iuliani 30)) and ISIS FARIA (in the nominative case) (Fig. 6). If the piece drawn by Tanini was genuine, the legend DEA ISIS FARIA would be unique (an unicum). Actually, it is likely that the legend transcribed by Tanini was the result of a wrong interpretation. This is despite the fact that Tanini was aware that the legend ISIS FARIA, as well as the less common legend DE ISIDI, occurred on the obverse of the token specimens from the ‘anonymous’ series, as the specimens catalogued in his ‘Supplementum’ demonstrate.

Sadly, the ‘Supplementum’ by Tanini is the only available source for the discussed specimens which, like much of the material published in his volume, are no longer traceable. Indeed, the Tanini collection is currently dispersed. This numismatic collection was incorporated at some point into the Ranuccini collection, which came in 1850 into the Medagliere Granducale of the Reale Galleria in Florence. In turn, the Medagliere Granducale was moved to the Archaeological Museum of Florence (MAF) since 1895. Regrettably, there is no trace of the ‘Vota Publica’ tokens described by Tanini either in the MAF collection or in their registers. As seen above, some of Tanini’s tokens may have been acquired by the Vatican collection at some point in the twentieth century, but the lack of data does not allow us to br certain on this point. Further archival research may hopefully shed light on the fate of the tokens that were once part of Girolamo Tanini’s collection.