Poka Yoke or fooled proof is one of lean thinking's tool, which is originated from Toyota Production System. The tern of Poka Yoke was defined in the 1960s by Shigo Shingo and the aim of Poka Yoke is to reduce the human error in the production line by designing the process to be able to detect by an operator that the operator forgot to finish some element of work in his process. Then after applying in the production line, Poka Yoka was applied in desing process to prevent the user to use the product in the wrong way For instance, in the first picture, the plug does not design to seperate the prise, which has different size, as a result, a user might be able to use plug in the wrong direction, which leading to the safety issue of the user, while for the second picture, the plug design to seperate the prise, as a result, the user cannot use the plug in the wrong direction, consequently, it will increase the safety of user. In conclusion, Poka Yoka is an important tool to reduce the rework or defect product in the production line and to make the product, whicng considering about the user.

The history of Toyota production system

Toyota Production System is an apporach, which was founded by Toyota. TPS was developed in order to help Toyota to survive in the intense compettion in the 1960s, when Toyota was the new entrant in the automotive market. In addition, at that time, most of automotive companies used mass production approch, which was founded by Henry Ford to reduce the cost. Mass production approach has an aim to reduce the cost by standardized the process and using economy of scale to reduce the cost, as a result, many automotive companies took over their supplier to make the vertical integration to have the lowest cost in the strategic product to have an competitive edge. However, to apply mass production, the company has to spend a number of investing budget on inventory, work-in-process, low utilized machine,etc. Consequently, it seems to be clear that the small company could not afford on this approach, as a result, Toyota was forced to find another apporach to reduce the cost because Toyota could not replicate the mass production strategy of western company, for the reason that the company could not afford for a huge number of investing budget and if Toyota replicate the western approach, the company might not perform as well as the western company, as a result the management team in Toyota founded another approach to reduce the cost from different method from their competitors by reducing non-added value activities to increase efficiency and to satisfy the customer. As a result, this approach has become an important approach for Toyota to compete in the market with their competitor and this approach could help Toyota to be the largest company in automotive industry. How Six Sigma could help an organisation to reduce their cost

How quality could help an organisation to have more profit?
According to figure 1, it is the chart between sigma level of a company and the cost of quality that the company has to pay to fix the problem. From the graph, it is clear that the company, which is not focused on the quality and has a performance in level 2 of sigma, might have to pay 50% of their profit to fix the external and internal failure of their product, while the company that could perform well in their production line by reaching fifth to sixth level of sigma that company might have to pay less than 5% of their sale to fix the quality issue. Inconclusion, Six Sigma could help an organisation to reduce their quality cost and to satisfy the customer. 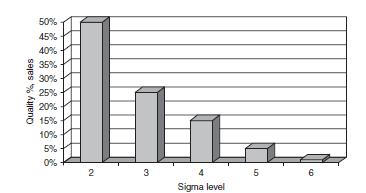 What are six sigma methodologies? 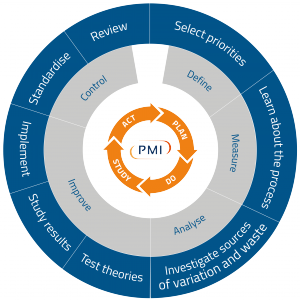 What is the methodology that applies in Six Sigma? DMAIC is one of the most substantial methodology in Six Sigma. DMAIC is the methodology that has a step to follow in each stage of a project. D- DefineM- MeasureA- AnalzaeI- ImproveC- ControlIn the define stage, a team has to choose the project that needs to improve and the criteria that have to be used might depend on an organization, moreover, in this stage, the team leader has to write the charter and project planning to the sponsor in order to present the objective of this project.The second stage is measure. In this stage, a team has to collect an information of an interesting project.For the analyse stage, a team leader will analyse that what is the problem of the process by using the information from the second stage.After analysing the root causes of the problem, in this stage, a team leader has to find the method to improve the current performance to make sure that the team could solve this problem.The last stage of DMAIC is control stage. After analysing and improving a process, the last task of a team is to make sure that this problem will not occur again by using many tools; such as, control chart or making a sampling plan.