Two Gladiators walk into a Bar….

Is it dangerous t 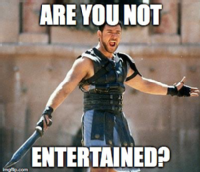 o try to be funny in a book review about humour? Will the wit provided add to or detract from the book? Does the humour of the reviewer impact on the reviewed? Are questions about questions useful? I imagine the answers to these questions are as easy to answer as some of the questions Mary Beard raises in her book, Laughter in Ancient Rome. The basic construct of her treatise is to deconstruct. Deconstruct the established and somewhat modal approaches to humour, not only in terms of Rome but also in the arguments of 'modern' scholarship. Beard is playful in her tone, whilst seriously attempting to make a mess of the established order of humour. In this review I will be looking at how well this is achieved and what the ultimate purpose of making such an attempt is designed to do.

Mary Beard’s book is, probably because of her methodology, a unique insight into the world of Roman Humour. Her promise to make the subject of humour messier is well kept throughout an easily readable text, not just for Latinists or other scholars, but also for those who have a fleeting interest in conceptualised arguments about humour; as well as the avid generalist. I have not read a book so determinedly post-modern, with the idea that theorising about laughter is all well and good, but should not be boxed neatly into the three main accepted theories of superiority, incongruity and relief. It is refreshing to read a text in which the current and past concepts of laughter are explained and carefully set out, then quite neatly and expertly exploded. This does not mean that Mary Beard is not interested in these theories but rather that she is interested in why these theories have been accepted; and why scholarship has tried to make humour fit neatly into one or other of these theories. 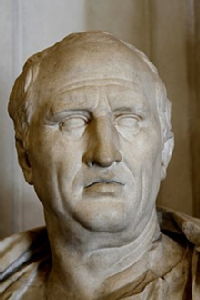 Once done with muddying the waters of scholarly interest, Laughter in Rome, gets down to the serious business of theorising. However the theorising in the volume is less purposeful and more in keeping with the tone set in the early chapters. The theorising is in and of itself not neat and tidy but messy and narrowly focussed. Beard starts to look at the detail of Roman laughter as a subject and her experience here shines through. Moreover, the expert use of Latin language and the explanations for her reasoning on the subtlety of each phrase is useful to the Latinist and unobtrusive to the novice. It can be summed up in the discussion of a particular phrase, which may also be seen as self-referential. ‘I don’t set out to make them laugh at me, but actually eis adrideo and compliment them at the same time’. Beard says ‘the joke here turns on the possible slippage in the phrase eis adrideo between “I flatter them” and “I laugh at them”’. I think this is possibly the motif for the book as a whole. Is Mary Beard flattering the theories she is deconstructing or is she quietly laughing at them?

The book inevitably has to put forward some ideas on Roman Laughter and rightly so. However, Mary Beard is careful not to just revert to common themes that she has spent much time analysing. One of the main theories that is put forward, for example, is that the Roman’s did not smile and that such ideas of the Roman smile are based in mistranslations of language. This and other concepts in the book are deliberately provocative, inviting the reader to challenge the established understanding and to think about viable alternatives. The most refreshing part of reading this book is that Beard is not trying to capture Roman Laughter and compartmentalise it, rather the opposite. Whilst no volume is perfect, there is a great deal that is good about the structure and tone that Beard takes in her approach. Mary Beards collection of lectures, now formalised into the book, Laughter in Rome is a delight, and one that should be used to not only understand, but challenge the theories of laughter, not only from those who have tried to write them, but from those who have then tried to perpetuate them as a catch-all reasoning on our desire to laugh. Laughter should be messy, uncertain and at times duplicitous, and Mary Beard has captured this, without draining the humour from her writing. One could ask the question what did the Romans do for us. Monty Python’s answer of the aqueduct and sanitation and the roads and irrigation and medicine and education and the wine, and public order now needs another one added to the list, that of laughter.