Success Factors and Tools in Process Improvement after in–module exercise

We can learn the PMI process improvement yellow belt course online before the module starts, but I have not finished all of it, and some knowledge is only known but not used. After doing the exercises to improve the assembly process of the model aircraft, I revisited the online yellow belt course and realized how many methods are actually used in practice. What steps should be taken to solve the problem? After finding a lot of similar points, the understanding of PIUSS is even deeper. 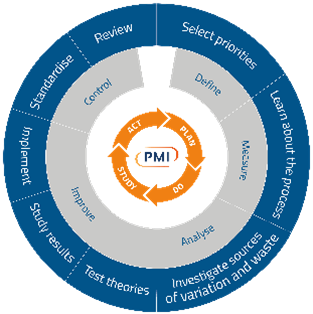 First, the DMAIC cycle is the most important part of the six sigma, and all process improvements are based on this cycle. People will instinctively think of solutions when facing problems. But this is not applicable in Six Sigma. When the problem arises, the first step we need to do is to analyze the entire process to find the cause of the problem and choose the part that will be prioritized for improvement. In this step, fishbone, flowchart, SIPOC, and Pareto diagram and so on can be used.

The next part of the focus is on defining waste. Because our goal is to shorten the delivery time of the aircraft so that it meets the customer's requirements. Waste has a big impact on delivery time, so reducing waste is a major measure.

Transportation takes a lot of time in this process when people stand up and go to another table to get component.

Motion is also a waste because some components fall down the table.

Over-processing: get the wrong components so go back again.

Inventory & waiting: the different pace of different operators, so some operators finish quickly and many planes are waiting in the process.

Defects: a wrong assembly will lead to more time to repair it.

Nearly all the wastes occur in this process, so when we look at these operations according to the kind of wastes, we will identify which part should we improve clearly.

Then, some small changes in design or supply will help a lot. A reversing screw makes assembly easier and more successful. Choose a person to supply parts specifically so that other workers no longer need to spend transportation time.

After the above steps, we got a new plan and then we move to the Improve stage. Test, study results, and modify the plan, and test again...until the results meet customers' requirement. And then standardise.

Besides, another important factor in this exercise is the balance of each operators' workload. The delivery time is determined by the longest time by operators, like the Cannikin Law and TQM.

Last but not least, we can't forget the review phase. The review includes the improving methods and teamwork aspect. What I'm doing now is also a kind of review~~

During the Process Improvement by Using Six Sigma module. one of the exercises was Helicopter Experiment by using Taguchi Methods.

To be honest, the Taguchi Methods was a little hard to understand at first, only watching the presentation. I didn't understand what the methods are used for. However, after the helicopter exercise, I knew the whole process of improving the helicopter. So I want to record the steps to review later.

1. Identify the factors which will affect the flying time of helicopter according to an original design by brainstorming.

2. Determine the range of the variable of each factor. Each factor has two different types.

3. Make 8 helicopters according to the decision. The sheet is based on the Taguchi Methods of 8 Run Number. 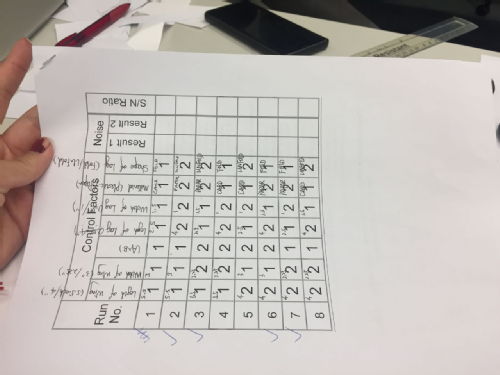 4. Test and measure the landing time of each helicopter. There are two results for each plane, one is "wing up", the other is "wing down".

The above steps are the process of testing and collecting data, followed by analysing the data.

5. Calculate the S/N ratio, in this exercise, we used the " larger is better" one. And the formula of this step is: 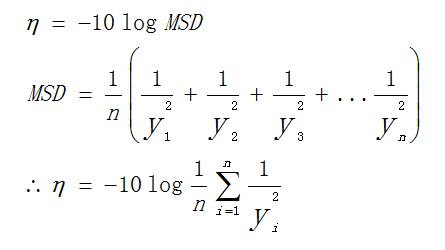 In the above picture, "y" stands for the two results of each plane. We calculated all the "η" at this step.

6. Calculate the average of each factor, such as A1, A2, B1, B2... G1, G2. These averages are based on the S/N ratio of the previous step, and the sum of the time of each of the four aircraft with the same factor is divided by four. And then the two averages of the same factor are subtracted to get a "Δ".

10. Make a new helicopter with all the factors which will help with the result and test it again. Compare if the time locates in the range. If it does, the helicopter is successful. The final value of η can measure the quality of a helicopter.

Although this experiment looks like a game, the method it uses can be extended to the actual optimization application. Because of this exercise, I have deepened my understanding of the Taguchi Methods and learned how to apply it to practice. I think this is really a meaningful exercise.