Time to bore you with more phone related rubbish – you’ve obviously been missing this fix for a while! Cue: run away as fast as you can

Ah! I’m finally free from the shackles of the 3 Mobile 12-month contract from hell. I have been cut off once in the last month not paying the £280 phone bill I wasn’t even liable for. I think eventually after settlements and goodwill, the contract didn’t cost me very much at all (but soooo not worth the hassle). The lowest points were: waiting 72 days for a working sim-card. Being charged for all my calls, and paying 2 line rentals for one phone line. And the phone needed to be replaced twice (Sony Ericsson’s 2nd 3G phone was a bit dodgy), but on the whole the K608 served well.

So despite 3’s efforts to provide me with more goodwill, new phone and 12months half price line rental, I stuck to my morals and left that sinking ship (plus they’re going on Orange for GSM in the next year), and joined O2. Obviously O2 have got their problems too, but my other (“wenchboy”) contract I’ve had with them has been fine, International Traveller Service (ITS) is very useful for any international calls/texts and I’ve got a Sony Ericsson K800 on it. To be honest, there weren’t many decent phones around, I was hoping for the K610, but it was too much like my last phone and its become obsolete already after 2 months! Phones down the line coming up are the lovely Walkman W850 and the cool Z610 flip, but “coming soon” could mean a matter of 3-6 months, so I settled for the K800 and its 3.2MP camera – nice to have something smaller than my Canon SLR to take out, and it has a proper flash! Nice screen, fast processor, nice browser, my only grip is the weight and bulky size of it. I think I shall nickname it “fatboy”. Music player is nice, will become full-on-mp3-player when the 2GB cards come down in price. So its pretty good being a videophone, MP3 player and 3.2MP camera in one. So I guess living with “fatboy” in the year ahead should be good.

Problems so far: the first charger it came with was a duff one, the guys in CPW Angel aren’t very knowledgable – tried to blame the simcard for a charging problem… okay… I guess its annoying going to shops where you probably know more about the products/till than the people working there. Hopefully this is the last time I will ever have to bore people about phones!

Follow-up to Commitment from nathanielho :: blog

Oh guess what? The number porting didn't happen yesterday. I can't believe I was naive enough to believe that after asking 3-mobile to do something, that they would actually do it. The PAC number has since expired, and I had to request another one and wait til the 27th March. Typical!

On another note, staying at my sister's flat in SE London this week (currently without phone/internet line), GPRS internet on O2 through my Sony Ericsson K608i has been useful… but damn slow. I really wish I requested a 3G/UMTS SIM card, then 128–256kbps would have been much better. I guess I'll just have to browse with the pictures turned off.

As of friday, I am going to be a one phone number guy. No more faffing around with 2 phones all the time. No thanks, primarily to (you guessed it) 3-Nobile who can't even receive a PAC number request. I am really afraid come end of year, I'll never be able to take the number back!

And if its still there in your address book, delete the one that ends in "963." I bet you're soooo confused :P If in doubt, just call all seven(?!) numbers, you're bound to get through!

P.S. Going to stay at my sister's for a week, so I'll be going dark for a week.

Follow-up to This is like The Neverending Story from nathanielho :: blog

I'd like to apologise to my usual readers, but the expletives will now be brought out, as there are no other words in the dictionary to describe Hutchison 3-mobile UK.

Finally*, after 70 Days they have re-connected me (now THAT's service)! This makes the relability record of this phone line a staggering 50.7% (that's why it is wank). It all started off with my phone getting stolen, I asked for a simple request that was for a replacement SIM to be sent to me. Yes I would pay for it too…

I am absolutely livid after 70 days without service (during christmas & new year), whilst they continue to syphon money out of your account. It was only until I told Ofcom, and they sent a little email before they got the chief monkeys out to play. The monkey I was in contact with was a Glaswegian variety. I don't see why it takes 60 days before I finally get noticed???

And guess what? Chief Monkey says, little monkeys do. I got a replacement SIM card (I burnt the last one) in only a day, when the "executive office" requested it. So otherwise if I hadn't contacted Oftel, I'd be still waiting. And now they've connected me at day 70. Given "oh an extra 20 days free line rental" back - well that's

I DON'T WANT YOUR CRAP SERVICE ANYMORE! I'VE ALREADY BOUGHT A CONTRACT ON A BETTER SERVICE THAT DOESN'T RUN ON PLAYSCHOOL COMPUTERS YOU TWITS. "Sorry sir, if you were to cancel your contract now, we wouldn't refund you anything." (Trading standards spring to mind). Grrrr

So what is the moral of the story children? Stay away from 3. Run away from their propoganda. Punch anyone who tries to sell you a phone on their UK network. (Unless you really like 50% uptime). This is the reality of how they treat their long-term customers (someone else had the same problem too). Get Vodafone 3G if you want video calling. O2 have good data rates. Their bureacratic hierarchy is set up wrong and is made up of the wrong species. They found a loop-hole in Darwin's Theory of Evolution back in 50,000 BC and exploited it, and that is why we have animals like that running phone networks today.

Follow-up to Knobs from nathanielho :: blog

Well one of their monkeys called me up during a lecture, and didn't understand "Call me back at 5, I'm in a lecture." So I just left him on speakerphone listening to Dr Jan Rakels explaining mechanics.

So another person who has got this exact problem contacted me through my blog today. And I think we both have no ideas what to do next, with OfCom taking 3months for complaints, I think the next step is to find a lawyer to sue their asses! I did tell BBC Watchdog as well.

Anyone know a good lawyer? Otherwise I'll be left with a couple of undergrads!

Follow-up to Torture of the 3–SIM card from nathanielho :: blog

Hmm their 3–5 days to send a SIM card from last Wednesday has passed, and I am still not in posession of it.
But they had no problem sending me another bill for £35 again on Monday this week, and it duly arrived Thursday.

Torture of the 3–SIM card

After spending 24hrs in a freezer at -22degC. The SIM was removed and thrown into boiling water. The criminal SIM 8944xxxxxxxxx7444 refused to go down quietly and still seem to be able to communicate with a phone (just never with the network – its crime).

So the justice department had no choice but to carry out the following torture methods: 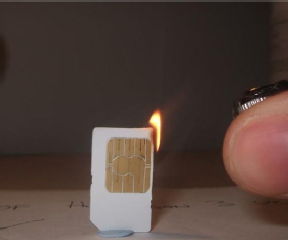 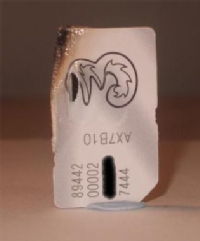 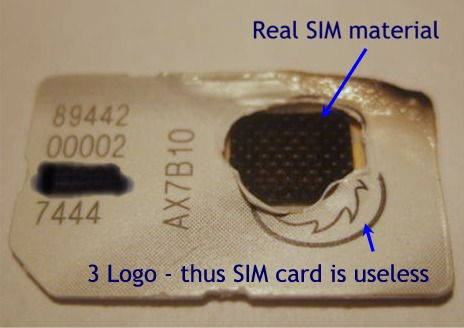 Follow-up to Giving 3 mobile the 2–fingers from nathanielho :: blog

Hey don't call 0870 numbers, especially if its to the mongs at 3-mobile. Call the customer services on 0800 358 6795. And make them pay.
Rachel suggested that I should threaten to call them on their 0800 number for every second I'm disconnected. So that's

even at a lowly cost of 2p/min

Hmmm also sent a complaint letter to their Hutchison 3 UK HQ in Maidenhead and a few phone calls. Turns out they're going to send me a new SIM card. Yippe doo wee. All is great. You can just see flowers sprouting out from behind my desk and singing birds are perched on my shelf.
Except being the mongs they are, they sent it back home without telling me.

Now to decide the fate of the last SIM card they sent me. Death by 10KV or microwave? What do you think? 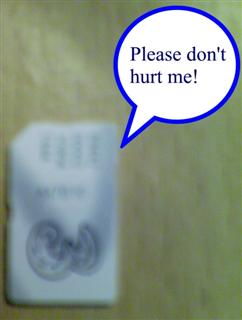 Follow-up to 13 calls to 3–mobile, 0 calls made on 3–mobile from nathanielho :: blog

Yey! free from SIM-locks! (can't be unlocked my arse!) This is definately something 3 mobile doesn't want to see. Contract Orange SIM inside thanks to Chris Purssell (voted Bloke of the Week and Benefactor of the Month by this website). Yeah, Chris has random spare SIMs with 200 free mins to donate to charity cases like me.

This is the first time the phone has worked in 43-days – no thanks to monkeys at 3.

Follow-up to I Envy People with Phones that work from nathanielho :: blog

Right today I have submitted my complaint (about 3-mobile service) to Ofcom. Hopefully they will give them a right bashing. Endless calls on behalf of my case have already been made by the wonderful people at The Link (thanks Chris! - and I'm a Carphone customer!).

On another note, today Chris brought in his Vaio and phone cable, and we had a mass phone SIM-unlocking session. The lucky phones were:

Mine was the most experimental (3mobile said they didn't even have codes for it). Seeing that unlocking phones can go wrong. It would literally make or break mine! But success! Chris has saved me a lot of money (that would have gone into 3's pocket - we don't want that do we). And finally my K608i was no longer a glorified glow brick, and works with my Orange SIM.