Time to bore you with more phone related rubbish – you’ve obviously been missing this fix for a while! Cue: run away as fast as you can

Ah! I’m finally free from the shackles of the 3 Mobile 12-month contract from hell. I have been cut off once in the last month not paying the £280 phone bill I wasn’t even liable for. I think eventually after settlements and goodwill, the contract didn’t cost me very much at all (but soooo not worth the hassle). The lowest points were: waiting 72 days for a working sim-card. Being charged for all my calls, and paying 2 line rentals for one phone line. And the phone needed to be replaced twice (Sony Ericsson’s 2nd 3G phone was a bit dodgy), but on the whole the K608 served well.

So despite 3’s efforts to provide me with more goodwill, new phone and 12months half price line rental, I stuck to my morals and left that sinking ship (plus they’re going on Orange for GSM in the next year), and joined O2. Obviously O2 have got their problems too, but my other (“wenchboy”) contract I’ve had with them has been fine, International Traveller Service (ITS) is very useful for any international calls/texts and I’ve got a Sony Ericsson K800 on it. To be honest, there weren’t many decent phones around, I was hoping for the K610, but it was too much like my last phone and its become obsolete already after 2 months! Phones down the line coming up are the lovely Walkman W850 and the cool Z610 flip, but “coming soon” could mean a matter of 3-6 months, so I settled for the K800 and its 3.2MP camera – nice to have something smaller than my Canon SLR to take out, and it has a proper flash! Nice screen, fast processor, nice browser, my only grip is the weight and bulky size of it. I think I shall nickname it “fatboy”. Music player is nice, will become full-on-mp3-player when the 2GB cards come down in price. So its pretty good being a videophone, MP3 player and 3.2MP camera in one. So I guess living with “fatboy” in the year ahead should be good.

Problems so far: the first charger it came with was a duff one, the guys in CPW Angel aren’t very knowledgable – tried to blame the simcard for a charging problem… okay… I guess its annoying going to shops where you probably know more about the products/till than the people working there. Hopefully this is the last time I will ever have to bore people about phones!

Follow-up to How MUCH??? from nathanielho :: blog

It seems the problems never stop. This time my phone number (ending 843) has dissapeared into the sea of unwanted numbers and my 3 phone line has reverted to the old 454 number. So you probably can't text or call me. Hopefully normal service will resume shortly. 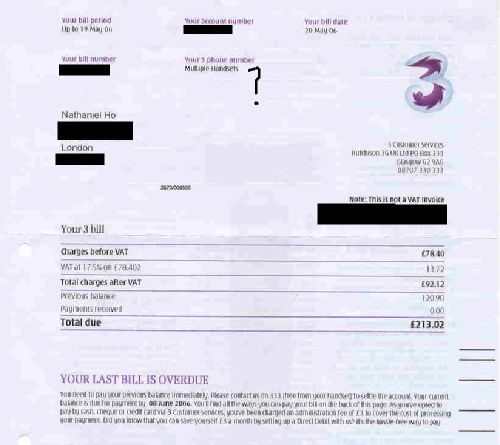 They've buggered up again! Why am I not surprised. And its taking just as long to sort out as the other problems.

They've basically done some creative accounting by charging me for all my free calls. I just hope they don't mark my credit record for not paying for £200 of stuff I'm not even liable for. I hear o2 have this problem too.

Yey My phone's back from its holiday

Follow-up to You could see it coming from nathanielho :: blog

I got my phone back from the Carphone Warehouse! I've missed using my own phone. It transpires that it was ready last Monday on the 22nd. But they were calling up my old home number and couldn't get to me. Didn't they think of ringing my mobile number??

Thanks very much to Laura for lending me her spare phone, saving me from that horrid piece of Motorola junk which I had to pay a £100 deposit to borrow from the Carphone Warehouse. With hindsight I should have called 3 to repair my phone instead of the retailer. Cos what 3 do, is send you an instant replacement, coulda saved myself a lot of time. But knowing how 3–mobile work, I might have just saved myself a lot of unnecessary grief!

They've replaced my phone again with a new one. This is the third K608i since September. The fault was incredibly weird this time as well. Unfortunately its SIM–locked again. And this time Chris isn't sure he can unlock newer K608's :(

Update: This phone has got the buggiest excuse of a firmware, its so bad! Keeps crashing. The last one was immaculate... apart from the fact it didn't turn on...

You could see it coming

Follow-up to My phone's on holiday for 14 days :( from nathanielho :: blog

My phone is now extending its 2–week holiday by another 2–weeks because it needed to go back to Sony Ericsson world for full rejuvenating repair. You could see this coming, all because it had a stupid 3 logo on it. This means 2 more weeks with that hideous motorola housebrick :S

Bad thing is that, the phone might come back SIM locked again :(

CPW phoned me up to say that they'd need to send my bricked Sony Ericsson K608i away for 2 weeks to get repaired (plus to replace the dreadful joystick). That is horrific news for me, because it means I have to live with that hideous excuse for a phone by Motorola (I won't tell you the model cos I don't want to damage your eyes).

Its a fast phone in terms of its processor and its got a big screen. But the thing will drive you nuts. Its the largest phone I've seen since my dad got his first analog beast in 1992. I think Motorola should do the whole world a favour, and stop making phones. Plague of modern society (them and 3-mobile) The V3 is the only just ok phone cos it looks decent, but even they drive their owners nuts with the menu system and pitiful memory capacity.

Someone please lend me a 3G phone?

In for repair again

I'm loving this: being charged for £120 free calls, 50% uptime, and now the phone broke again!

Took it to the Carphone Warehouse again to get it repaired, but this time I came back with a loan phone. Wouldn't call it a phone as such, cos its that Motorola Housebrick. Damn 3 and their stupid SIM cards that only work in 3G phones.

This is why you should NEVER use just a 3-mobile phone. You should always carry another network's phone as a spare cos a 3 phone is always GUARANTEED to break down (this is the second time this year). And then, you should never ever use 3-mobile – this is the reason they're gonna report a loss of £1.5 billion this year :D

Ease up your phone book entries cos I…

The Sony Ericsson K608i died today :( and for no reason whatsoever.

Follow-up to Commitment from nathanielho :: blog

Oh guess what? The number porting didn't happen yesterday. I can't believe I was naive enough to believe that after asking 3-mobile to do something, that they would actually do it. The PAC number has since expired, and I had to request another one and wait til the 27th March. Typical!

On another note, staying at my sister's flat in SE London this week (currently without phone/internet line), GPRS internet on O2 through my Sony Ericsson K608i has been useful… but damn slow. I really wish I requested a 3G/UMTS SIM card, then 128–256kbps would have been much better. I guess I'll just have to browse with the pictures turned off.

As of friday, I am going to be a one phone number guy. No more faffing around with 2 phones all the time. No thanks, primarily to (you guessed it) 3-Nobile who can't even receive a PAC number request. I am really afraid come end of year, I'll never be able to take the number back!

And if its still there in your address book, delete the one that ends in "963." I bet you're soooo confused :P If in doubt, just call all seven(?!) numbers, you're bound to get through!

P.S. Going to stay at my sister's for a week, so I'll be going dark for a week.