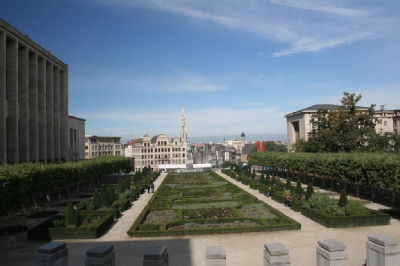 By the time I got to Brussels at 5pm, I was pretty sick and tired of air travel already. I read all the papers that were in Anglais, and wrote so many essays into MMS's and sent them home, but I was still bored. The great thing about being on T-Mobile UK Flext was that when you're in the EU, you can send MMS's out of your allowance (SMS's cost more). I think I ended up sending about 150 messages home from Finland/Denmark/Belgium/Germany. So no one was safe from my spamming! :D

During the flight I read an article in the FT about Belgium's potential splitting up (due to lack of government for 100+ days), so when I arrived and greeted Lotte I asked

Am I in "Belgium" or the "Independent State of Brussels?"

To which she assured me that Belgium was still a country. The general British/French/German media protrayed the situation as a country on the brink of a civil war. Much to the amusement of the people who live there. I was there for 5 days, and not once did I see a Flemish person beat up a Wallonian - although I did see a restauranteur start a fight with another restauranteur, but that was probably business related (and french from the manner in which they fought).


By the time I got to Lotte's hometown which was about 1.5hrs of more travelling, I was well and truely wrecked. Lotte's mum had made a lovely meat loaf, which unfortunately at the time I didn't feel like eating. The hospitality was excellent: I had two rooms to choose from! And Lotte's dog 'Swift' is  the cutest and smallest dog I've ever seen. We quickly bonded and within an hour or so I was already cradling her. 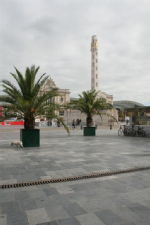 The next morning (Thursday) we walked around a lake in the local village thinking we would have a quiet day for me to rest, but then we spontaneously decided to see Eline in Leuven. Leuven is as you know, the home of the Stella Artois brewery and subsequently the biggest student city. Its a very pretty city and is largely dominated by the university and students. Its like an Oxford for instance, but smaller, and much more cleaner! Unfortunately throughout my stay I didn't actually try a proper Belgian Stella (I don't like the version we get in the UK) - nor a Belgian kebab (which John swears by). It was pretty much a lazy day spent walking around, eating pancakes and having novelty beers such as a "Kwak".

Friday was the day trip to Brussels. The clouds on the continent finally disapeared to reveal clear blue skies and hot sunshine (nice change to rainy 12degC Finland earlier in the week!). We walked around the normal touristy places, the cathederal, mannekepis to name but a few. Unfortunately I went to the Royal Palace one week too late. A great museum they have is the Musical Instrument museum, which was really interesting. Particularly from an inventive perspective, it was interesting to see guitars with 3 sets of strings and a concave piano for instance. The day passed in quite a relaxed manner, and a lazy dinner out in characteristic narrow street that was laced with restaurant tables finished off a great day.

Saturday was the proper day of relaxing. A short browse around local the town Hasselt and the local village allowed me to buy a nice stash of Belgian chocs to take home and to do more continental coffee drinking in cafe bars. It was nice to do some lazy activities after 11 weeks of office work. I discovered what a real Brussels waffle looked like: 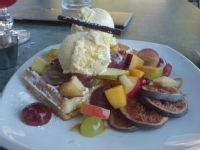 So on Sunday it was time to say goodbye to Lotte and her family before hopping the train over to Germany. Thanks very much Lotte, I had a great time visiting you, your family, friends and Belgium again!