Monday was a long 22hr day but soooooooo much fun. Warwick Motorsport went large at the home of 50+ years of motor racing: Silverstone Baby! On a day (very well) organised by Oxford Brookes Motorsport Club, a small handful of us got up at 5.30am to cruise into the Paddock (with our jaws WIDE open) at 7.45am in our own cars. We were warming up the track for the Formula 1 tests the day after! 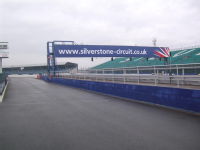 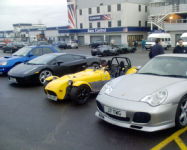 There were six 20minute sessions and instructors available. I shared the driving with Will. I originally though we were going to drive the short BTCC circuit, but to my delight we were driving the full length 3.06mile Grand Prix circuit (kinda cos it meant that the fast cars could overtake you on the straight and leave you alone). 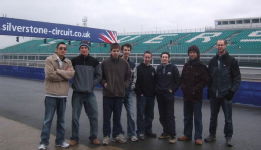 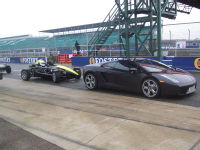 We were in 3 groups: Group A were SuperKarts - basically Go-Karts on Steroids, Group B - Anyone who was fast, included Lamborghini Gallardo V10, some Porsche 996 Turbos, and racing BMW 3series oh and Warwick-Grad Andy Smith's 300BHP Supercharged Ariel Atom, leaving Group C was slow-bo's which consisted of us in our slow road cars.
Will had a lot to learn, the circuit and my S40's oversteering characteristics(! as Will found out at Club…. twice). The rest of us, JJ, Jezza, Simon Young, Nader and Pete had the "benefit" of knowing the layout of the circuit from computer games lol.

I'm sure the track is narrower than it is in the game… The real Silverstone must be wrong! 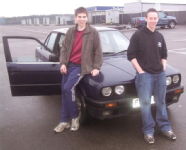 The track was still damp and wet from overnight rain. The temperature stayed around 11degC so it never dried. Thus rendering the kerbs a total no-no. One of the highlights was the ride on the "Safety Bus." We were taken around by James Gornall from Oxford Brookes (2003 BARC Formula Renault Champion). And boy was it a joy. Now we all know Ford Transit 14-seaters are no racing machines, but James' control was amazing, the lines were (as you'd expect from a racing driver) spot on. Using every millimeter of track without stepping on the white lines. We had 2 laps where the lady instructor of OB told us how to tackle them. We had some nice oversteer moments powering round Club corner. That was a total laugh.
After Will spent 2-laps behind the safety car for more familiarisation with car, lines and general (lack of) grip. I jumped in the driving seat for the first 20-minute session. Driving up to the pit exit, I wave my yellow wrist band, green light, 2nd gear 5500rpm and off we go! Taking a nice wide entry into Becketts, keeping it nice and tidy, feeling the grip levels into Chapel. Already the green Alfa in front is holding me up, and Pete and Elvin are wanted to get passed. So accelerating hard out of chapel keeping left to let the fellow Warwickers through, 85mph… but as soon as we hit Stowe the red flags are out. Everyone lifts off, the engines sighs heavily until 30mph is reached and we trundle back to the pits. Session over because a BMW has spun it into the gravel at Club. The stewards have a quick word with us because there were 5 spins on the out-lap! 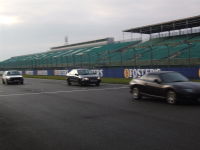 Next hour's session I have James (the mini-bus driver) booked to be my instructor. After a quick intro, we sit idling in the pit lane waiting for the SuperKarts to return, during which we talk about his motorsport career and plans for the year. And then green light and we're off! James talks me through every corner. Braking, turning points, throttle balancing, progressive throttle input and where the apexes are. It was all really simple building on previous knowledge and developing my style and James was very patient (or I must have actually been doing it right!). I did about 3 laps before I came in to let Will have a go, but by that time session was over). Only problem was my damn Reebok trainers which aren't wide enough to heel-toe: so my clutch suffered, as it had to contend with 5000rpm downshifts all day.

So then it was lunch break for some bog standard greasy food at the Paddock "eating place" (I'm not going to call it a restaurant). After lunch, the sun started to peek out, and everyone thought the track had miraculously dried (including me!). Get out of the pits, the track has dried in places, the grip feels good, I'm driving smoothly, overtake the red Astra again on the straight, Stowe's excellent: feeding the power whilst I drift towards the kerb. 2nd gear club is fine, understeer kept minimal by shortshifting into third exiting Club at 60mph. Braking nicely for the next chicane, bridge no problem, becketts and luffield zipping back round woodcote to start the next lap. The picture below explains the problem.
I've left my braking for Copse too late (I've not yet started braking in the pic), I'm on cold tyres (after lunch break) and I was stupidly in 5th. I turn and and the back end just slides out putting me in a monumental 270deg spin. It all happens to fast, you just stamp on the brakes and clutch, feel the ABS work hard as tank slapped into backwards motion. No collision phew(!) and set off again. I drive more cautiously with increased margin as I head for the pits to receive a slapped wrist from the marshals... or so I thought! JJ (Warwick Motorsport Exec) on his first outing in the beemer, decides that he'll take the flak off my spin and bin the beemer into the wall at Abby chicane! Red flag. Session over.

JJ will never see the end of this. Jezza and SiY are gutted. As JJ returns in the Rescue Vehicle and the BMW in the back of a truck, the Silverstone Personnel tell us sarcastically to "go easy on him." I of course had nothing to say having spun. The front right of the Beemer has had a small collision. And the chassis is digging into the wheel. They enlist the help of a dude with a Nissan 4×4 and a bit of rope – to yank it back out. After a lot of diesel exhaust fumes and clutch smoke, the whole bumper gets pulled off. And JJ kindly poses with the bumper trophy (told you only one of them wouldn't last). 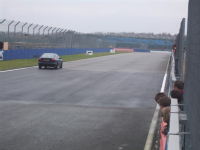 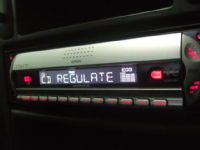 Now its Will's turn. I was feeling very anxious because I'd found it slippery out there, and he'd be out for the first time on his own with no instructor. I just sit on the pit wall hoping to see it come round! It comes back in one piece, Will and Pete talking about their hairy oversteer moments at Club (which I never got a hint of with throttle balancing) , whilst we watch SiY riding shotgun in Andy's Atom trouncing EVERYONE: Porsche 911 Turbos, Lamborghini Gallardo… hitting 150mph on the straight.

So the next time out for Group Slow-bos: William has Chaz as his instructor, Pete decides to follow William, and I feel much better now. Will has a ball of a time whilst Chaz tells him to go flat through most bits of the circuit. Pete is having a fabulous time because he's following the right lines which he later develops to going very very fast. Turns out Will has been driving with the stereo on all the time lol. Chaz and Will were boppin' After a few more sessions where Will heats up my tyres for me, its my turn again, where I rebuild a good pace and rhythm, driving smoothly and well, hitting 90-ishmph on the back straight. Generally hitting 70mph before every corner.

It was an absolutely fabulous day and at 5pm we had back home. Shame I didn't get a ride in the Atom, the fastest car of the day: ask SiY what that was like. Thanks to Oxford Brookes Motorsport Club for a well organised day. James and Chaz for instructing. Thanks to Siggy for the helmet: it made the 270deg spin a lot more comfortable!

If you were wondering:
Road cars were doing roughly 3m 30 (spectator's counting)
The fastest car Ariel Atom (oh hear the supercharger whine!) was 2m 30 (overtaking the Lamborghini Gallardo 5.0 V10 easily)
Formula 1 cars 1m18
The whole day including the commute, I managed 27mpg! even with 6200rpm upshifts! 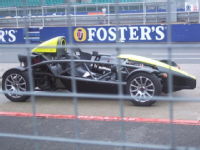 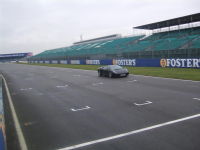 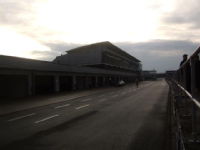 More Pictures in the gallery