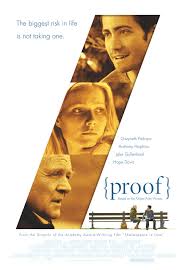 Went to see this at the Apollo with Laura last night, and I still don't actually know what to make of this movie. Its not actually about Maths, but psychological problems and emotions. About a famous Mathematician "Robert" (Anthony Hopkins) and his daughter "Catherine" (Gwyneth Paltrow) as they both come to grips with insanity and being a maths genius. And Jake Gyllenhaal runs about a lot.

Its a small cast and I think this movie would be much better if it was still in its play form. Don't get me wrong I still think its good, its a movie/story I can typically imagine my mate Alistair analysing in a 30,000 word essay: the older sister Claire showed little emotion towards her father's death because she had lost the sympathetic touch with him because he was insane for the past 8 years... Overall it may have too complex for me on a saturday evening. It is a very different movie than the normal emotional stuff.