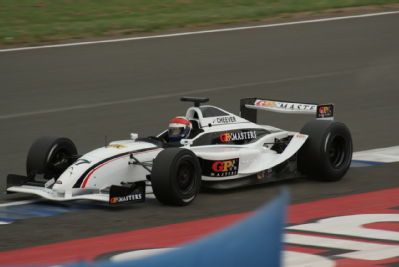 I was very excited when I heard they were coming to town. Silverstone was to host a round of the GP Masters. This is a small championship for any ex–F1 driver who is aged 45+. Other pre–requisites are: children, and a belly. That's the only way you qualify to enter.

Last year I watched the first race in Kylami, South Africa on TV (with Murray Walker) commentating and it was great. Especially the showing from Emmerson Fittapaldi (or grandad as I call him) who was putting on such an impressive pace after overcoming his fears and reservations as an old man. What a legend. He also had the best one–liners today.

This is the first time I've finished 8th and been welcomed into the press conference!

So Paul's birthday present was tickets to see it. After long drive through some atrocious weather we got to Silverstone to watch the end of a British F3 race (Mike Conway won all the way). It was windy and cold. Poor Paul who only found out about this at dinner the night before, had packed no warm clothing for his weekend stay in London. We had four seasons in one day (like one of the driving instructors had told us earlier in the year). So we braved the weather along with other Mansell fans who had dug out their "Mansell" Union Jacks from the 1990s. Rob was prepared in a rain coat, we had 2 umbrellas: it rained like autumn, winter wind chill froze your ears and the track was very wet for the GP masters' race.

Derek Warwick was lined 4th, poised ready to seize the oppourtunity with Nigel Mansell in the back (and later Mansell in the pits with technical problems), but first lap collision took him out the race. We watched at Stowe as they gunned round in a semi–tiptoeing state. Taming their 650bhp beasts. One thing I've noticed is that quite a few of them are slow to react on upshifts, hitting the limiter quite often. But their car control is still there. The prospect of a charging Mansell starting 3rd last was not to be due to mechanical problems. He had 1 lap, where he span about 20 times, until he retired. Not a good day for all the British and Mansell fans. I wanted to see my hero in action :(

Anyway the 'charge from the back of the grid' was dutifully taken up by the Belgian: Erik Van der Poele. He scythed through the field and was chasing down leader Eddie Cheever non–stop, and they switched leading quite often until Erik span about 3 times on the dying laps. Fun to watch. At the end of the race, the weather cleared up for the remaining Thoroughbred GP, F3000 and F3 races. Overall it was a nice day out, real real real shame about our Nigel Mansell, I was soooo looking forward to a good showing from him. After that race, the summer sun came out for the remaining F3, F3000 and Throughbred GP races. I will upload some of the 600 pictures I took soon.