All entries for Thursday 23 November 2006

PHONE WANG!
(“Phone Wang” is a pre-emptive warning that I will be talking about phones, you may look away now) 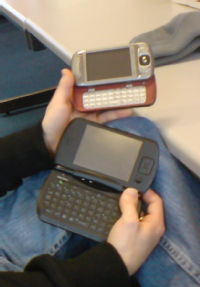 Chris P this week became the first person in the world to carry two PDA phones: his outgoing xDA and his new T-Mobile wenched mDA Vario II. Obviously the new one is faster at 400MHz and because of its conventional design, it means he can answer the phone without needing to spin the screen round 180degrees.

He has the T-Mobile Web ‘n’ Walk plus tariff which means he’s on the internet constantly (unlike O2’s £2.35/megabyte) and signed into MSN constantly. This is a very strange concept, as it will mean that instead of SMS, IM can be used. Despite our efforts to take the mickey out of T-Mobile, it seems that the signal in 2G and 3G is very good round here in Warwickshire and the only decent data tariffs (their plus package is 3GB).

I researched for a MSN client and it seems that mess.be have java clients for pretty much all phones. I got one for my Sony Ericsson K800i and it works fine (there are nokia clients too). It seems the data rates are fairly small, but I still don’t reckon anyone could use it economically unless they are on a data tariff. But its there if you want it. Might be useful for those communicating with friends when abroad for long periods? Just letting you know it exists.

Books? What are books?

Something quite amazing happened the other day. I went in the library, found a book and checked it out. You may not think this is anything spectacular at all espcially for a third year student, but I have never taken a book out before!

My limited knowledge of the place was apparant when Maddy and I were looking for a french DVD title (Tais-Toi) on the eCatalogue, and I had no idea what the web address was, nor which search engine to use. Its nice doing a degree that doesn’t require essay writing!