After my last exam, someone told me that life on the other side was a bit anti-climatic - a bit boring. I thought I would be ok with my next few weeks lined up with some plans. First up on the list was tenns.

Lotte, Sachit and I went to the DFS Classic, where the WTA play before Eastbourne. Rain had interrupted play in the previous day, so instead of watching quarter finals, we were watching 3rd round AND quarters... well at least that was the plan. 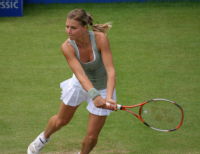 The first game we watched was Maria Kirilenko vs Jelena Jankovic. Play started 2hrs late because the club staff had to dry out the grass courts with towels! Jankovic played pretty poorly and very off-form, but still managed to win (and the whole competition). The sun was out and we were worried about getting sunburnt before it pretty much went dull grey. During the short break we went off to get some food. Maria Sharapova walked right past Sachit and he didn't even notice! Sachit went back to court 1 to watch whilst Lotte and I decided to get coffee and food - plenty of time to watch Maria play later. Then the heavens opened at 1.30pm.

The rest of the afternoon was spent waiting in the car for the rain to stop. Unfortunately, all games were called off. So we only got to see 1 match instead of 5 quality ones :(

We thought we'd hang around to see if we could get any signatures from the players. Sachit waited quite a while with me trying to get everyone to leave, but then his prayers were answered. Maria Sharapova came out and signed his ticket. It pretty much made his day.