and so another day begins

Its been a long time coming but here at last you can feel the onset of winter. This morning on the way into work it was cold, misty and there was a just a hint of frost – fantastic! I love sharp mornings. and so another day begins

Costly – I dont think so

Follow-up to Toyota Blues from 353 Rant and Rave

For information, the Toyota F1 budget was estimated to be around $300 million. This accounts for about 0.1% of their revenue, hardly a significant amount in the context of the Worlds largest automaker. As a proportion of their losses it amounts to about 6% so a bit more of a cost but now they aren’t able to suggest in any way that they have a racing pedigree, and they wont get any television advertisng – Oh how Honda must be crying in their beer this year – will we say the same about Toyota next year?

Toyota = DULL DULL DULL is that what they want to say?

FI is it Costly – I dont think so So, the inevitable has happened and Toyota F1 have left the room.

Only this morning I was writing some lecture notes on the subject of cultural transformation and lean and added a slide with Toyota F1 as the subject.

The Toyota F1 team failed to win a single race in 139 attempts (or rather just under 278 given that there are two cars in a team) – pathetic.

Why? why with all the money they spent, having hired designers with a good track record and with half-decent drivers, did they fail so badly?

Where is their long-term commitment? They started in 2001 so that is only 8 years – small beer compared to their much promoted long-term outlook in other aspects of their business. On the same day GM have announced that they won’t sell-off the Opel and Vauxhall operations after all, Toyota follow Honda down the road of surrender (unlike them surely).

Could it be that the Toyota Way just isn’t the way to achieve success in F1? And if so, why did Toyota start down this path in the first place? Could they not see that F1 is a dynamic, innovative and individualistic enterprise. The formula is always changing, from year to year there are changes in what you can and cannot do. Could they not see that their culture is not suited to F1. Were they so naive as to not recognise this at the outset or did they think that their methods were so superior that success was inevitable?

I’m sad that Toyota have succumbed to short-term pressures. This puts into doubt much of what observers say is special about them. I hope that the team get saved because there is a base on which to build. I’m sad that Toyota haven’t been able to learn how to win in F1, I expected more of them. I wonder what is going to happen to Kobayashi who seems a worthy contender.

Having said this, a little part of me is shouting Yes Yes Yes. There is a place still for the enthusiastic amateur, the passionate entreprenuer, the techno/political genius who is prepared to do the whacky thing and make it work. The small guy who just wants to race.

Apparently the University is planning to harmonise something. I don’t know what is being harmonised but think this may be it….

...I think we are all going to be given special discounts on Jaguar motor cars and as a test of this Porters have been allocated ‘S’ class Jaguars to replace their existing vans – good luck to them but I would’ve thought that a more environmentally sensitive solution would be for senior officers to be given vans. 2)
Mathematics Dept. I thought you were brainy types. Why then, in seminar room MS.B3.03, is the data lecturn on the left side of the room and the data projector on the right side (a good 10m away)?

Its not a rumour, its true.

See the guidance notes published by Her Majestry’s Government at
http://www.fco.gov.uk/Files/kfile/VAF3Guidance-10Dec07.pdf

However, I’m not absolutely sure about the number of existing Visa Application Centres (VAC) in China will be providing the biometric scanning. The most recent information I could find was:

So perhaps it wont be quite so bad – it will still be a nightmare though.

Its Balls Ed but not as we know it

Rave of the day are the images of noctilucent clouds that were referred to on the BBC News website today. I chose one as my new desktop wallpaper and its looks pretty neat. I never get tired of just looking at nature.

Rant of the day is really rant of the last few days (well, just one of them if the truth be told – I really am getting to be a grumpy old git). From rumours I’ve heard it seems the government is doing its best to destroy the University system in the UK by making it difficult for overseas students to come here. Now, no doubt they will say that it has something to do with Homeland Security but if so are they over-reacting, has the knee jerked a bit too far? Will we partly secure ourselves from a limited threat whilst at the same time undermining the nation’s place in the World.

Are we cutting off our nose to spite our face

The gist of what I’ve heard is that: The problems:

Back to my original point…Due to chronic underfunding, the University system here in the UK depends on the income generated by overseas students. China is far and away the biggest source of these students. We really have a problem with ‘anti-social’ behaviour from China don’t we? We can really do without them can’t we? Can we? We really don’t need a healthy higher education system (where will provide all these teachers Masters courses that Ed Speaks Balls – his Lakota Sioux name- is on about? China perhaps – ooops thats another rant). Its Balls Ed but not as we know it. 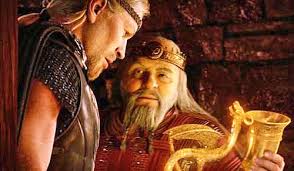 A big glass of mead for Beowulf.

Its all death and destruction today I’m afraid. I’ve just returned home from watching Beowulf and am now writing this entry and rewatching House of Flying Daggers (drinking a bottle of Tsingtao – my favourite Chinese beer – seems appropriate and later I will drink some mead in honour of Beowulf).

I managed to last 3 hours shopping today. Thats a record for me I think but bargains were had. I was after some new jeans and jeans are always a problem for me because I have long but skinny legs. I was after Rush style jeans from Lee but they didn’t have any in Slaters, nor in House of Fraser but I did eventually find some not-half-bad ones in GAP. The plus point of this is that a friend who we met in the shop by chance gave us a 30% off voucher – RESULT!

This wasn’t the end of the bargains, however, as I needed some new shirts and Lewins was just around the corner. What luck! it was Lewins ‘birthday’ and for the small price of an e-mail address they were selling £50 shirts for only £25, ties for 15 and, if you spent over £60, giving away £50 cufflinks – for free! So I saved approximately £135.

3 in 1 outdoor jackets were the last bargain at 20% off RRP. A very snazzy Berghaus Trojan Jacket for me (the liner makes me look like a character from Space 1999) and a North Face for MDW.

So this evening… went to see Beowulf for which I have written a short review. Summary: surprisingly good.

Before I post SotD I must go and pour myself a big glass of mead for Beowulf.

Snow was deep and crisp and even

I’ve been lazy and haven’t been keeping up to date with SotD so here it is before i forget. We had planned going for a walk yesterday but the weather was miserable so stayed in instead. In the evening went to visit some friends to see their new baby and surprise surprise when we came out it had been snowing like there was no tomorrow, real blizzard conditions – I nearly missed a T junction on the way back it was so thick. Even this morning after overnight rain the snow was deep and crisp and even.