All entries for Tuesday 15 February 2005 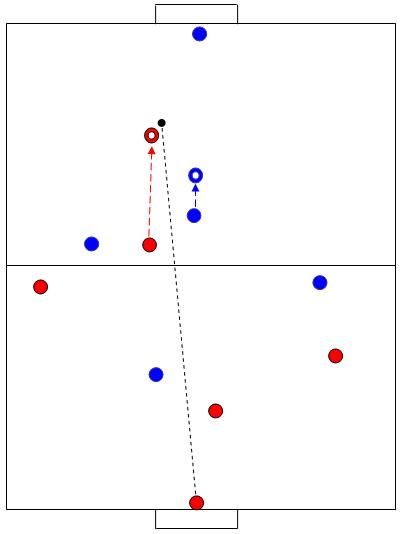 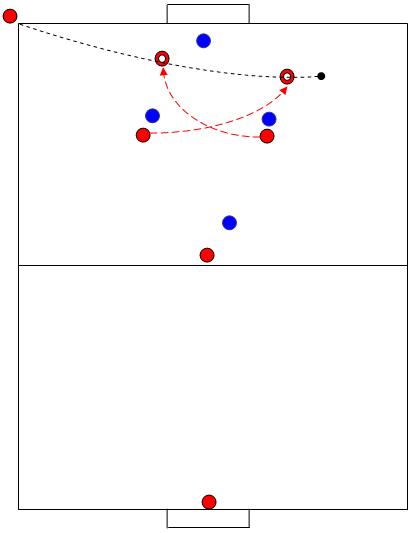 One player takes the corner and another stays back to cover any possible counter-attacks. This leaves two players to attack the ball at the corner. In general, the opposing team will have four players back defending: the box is likely to be congested. Therefore, the attacking players should start outside the box before making their runs. In this example the ball is drilled in low and hard, and the two attackers switch their positions: the right hand side player runs to the front, and the left hand side player runs to the back. This movement may confuse the defence, allowing the shot from the near post, or a shot or cross from the far post. 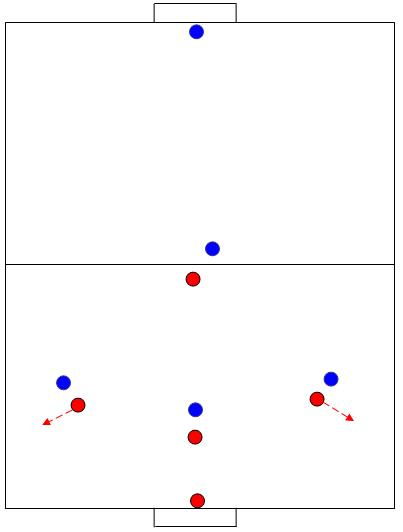 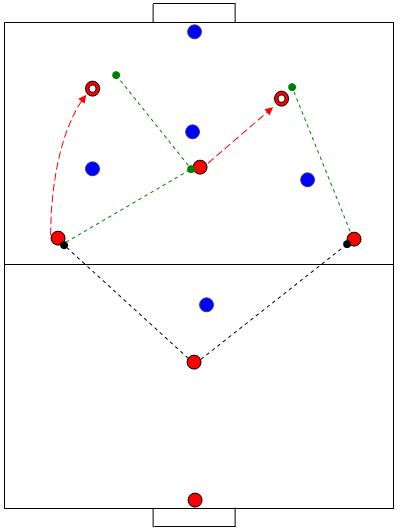 The defender has the ball. Note how the players are positioned in a diamond formation and there are two options for the defender: play to the left winger, or to the right winger. The options are at roughly 45 degrees to the defender, so the angle between them is an approximate right angle. Either of the wingers that receives the ball (black dashed line) has a multitude of options. Two examples are presented above. Example 1: the left winger gets the ball, and plays a one-two with the striker, overlapping the full-back and running onto the returned pass for a shot on goal. Example 2: The right winger collects the ball and plays it down the line for the striker to run onto  the striker can either take a shot, or play a cross for the other winger who makes an overlapping run into the box, as in example 1. The winger also has the option of playing a square ball to his opposite number, or a return pass to the defender. 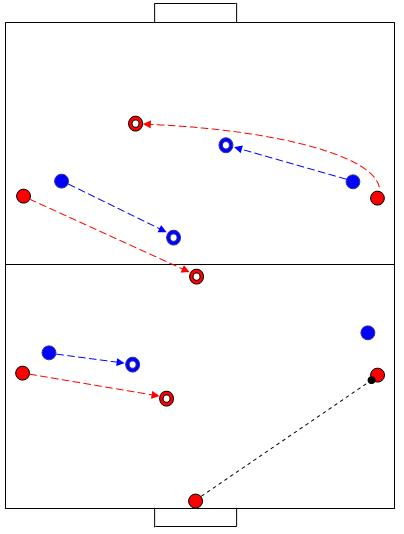 Initial positions are in a rectangle: two players on either side, one in each half, with their back to the touchline (this opens up the field of play to them, so they have options). In this example, the keeper plays the ball to the right hand side defender. The two left hand side players run towards him: this provides him with options. The right hand side attacker may also make a run around the back of the defence, into the space created by the run of the left hand side attacker; the defender with the ball can play a long pass over the top into this space for the runner. After an entry on this very site brought such publicity to footballer/author Owen Bellamy on becoming the Amazan.co.ck number one best seller, he thought it fitting to grant the Stallions Blog an exclusive preview of his new book, titled "Soccer for Dummies".

The very first pictures from his new book are to be released shortly, with five full pages in all. Bellamy's fans wait in anticipation of the great man's tactical genius…

At last week's highly entertaining match we were privileged to have football's top photographer, Miss Kim "snappy snappy" Goddard, who took some rather excellent photos of the Stallions in action.

Be sure to check out the gallery, and click on the images to read the hilarious comments. I laughed myself silly. Whoever wrote those is a genius. And I know I've been told a million times not to exaggerate… In Amazan's latest Best Selling Book list, 4 of the top 5 books are either written by or biographies of none other than our very own Stallions. "Football for Dummies" by Owen Bellamy has become so popular that there are rumours that he will be producing a sequel, "Soccer for Dummies", in an attempt to infiltrate the highly lucrative American market:

"My time at Warwick University was invaluable, and having been taught soooooo well by the lecturers there, I have learnt enough to not only be an amazing player, but also a best selling author. There's money to be made teaching the Yanks how to play, so why not?" – Bellamy back in 2004, fuelling rumours of another book.

"Pondo: My Story", the highly popular biography of legendary Stallions marksman Stez Pond, is still in the top five after an incredible 18 months:

"I keep banging them in, the fans are lovin' it" – Pond on why his book is selling so well.

One book is achieving a cult status, and that's "The Beautiful Game?" by Nathaniel Christopher, who carries out an in-depth study of the game's most "beautiful?" players. There are three chapters devoted to Peter Beardsley, with others including the likes of Luke Chadwick and Iain Dowie.

"It's not just about winning, but about looking good whilst getting the job done" – Christopher responding to the critics regarding the naming of his book "The beautiful game?" which was inspired by himself and his very short shorts.

Player/Manager Dan Baker's book "Baker: Made in Hillingdon" entered this week's list at number two, so was the big man himself disappointed?:

"On it like a car bonnet" – Baker, on the release of his new book reaching number two.

To purchase the books, please visit amazan.co.ck, or support your Stallions by buying from the Club Shop via the Galleries section.

We've have been challenged by JM Crusaders to a match at 2pm Friday 18th of February 2005
Venue: Westwood Old Astro 1

After the trimming of ladder C to seperate the wheat from the chaff, the Stallions are currently sitting 8th in the table, with the challengers in 11th.