There's little over a month left until the release of Harry Potter and the Half Blood Prince. Already there's lots of discussion about who the Prince might be, but also a major character is supposed to bite the dust. Without being too morbid, who might that be? 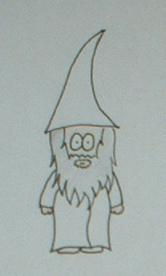 Could happen. I'm picturing an Obi Wan style "Strike me down and I'll become more powerful than you could possibly imagine", scenario. Don't reckon he'd mind dieing much if it helped the fight against Voldemort, besides he's getting on a bit anyway.
Probability of death before the end: 8/10
Probability of death in HBP: 5/10
Probability of Lenny Henry cutting off his beard for comic relief: 0/10, all good wizards need beards.

Editorial Note (Remove for publication): I hope no one notices that my picture of Dumbledore looks like a gnome.

I think a number of characters are pretty certain not to die. These are:

Ron and Hermione
They'd better not die. JK Rowling would probably have to relocate to a small unheard of island in the Pacific Ocean to avoid being pitchforked if they do.
Probability of some Gryffindor lovin' 9/10, it's gonna happen. 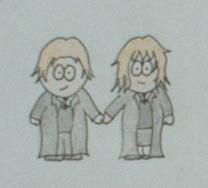 Fred and George
The first rule of any good story is don't kill your comedy characters. Well, maybe it's not the first rule but it's got to be in the top ten.
Probability of royally pissing everyone off with some prank: 8/10

Hagrid
Again with the comedy. He's too nice to die anyway, can't see it happening.
Probability of letting some vital piece of information slip: 10/10

Harry
I've come across suggestions that Harry and Voldemort's lives are so entwined that Voldemort might only be able to die if Harry does. Maybe, but I reckon that's where someone like Dumbledore might be able to come in and die in Harry's place somehow. And besides, can you really imagine the last line in the last book being "And Harry was dead"? Cue, millions of people jumping off a cliff.
Probability of death before the end: 3/10
Probability of death in HBP: 0/10 (Surely! Make it hard to get a seventh book out, though JK Rowling did seem to lose interest halfway through Order of the Pheonix)
Probability of whinging about friends/scar/girls/homework/anything he can think of: 10/10

I've been doing a little research into the meanings of some of the names in the Harry Potter books. This started after I stumbled across Romulus and Remus in the old encyclopedia, anyway I flicked through it a bit more, looked in the dictionary and browsed some websites. It's not exactly earth-shattering brand new information, but here's what I've found:

Remus Lupin: As menitoned above Remus is commonly associated with Romulus. Romulus, Remus' brother, was the mythical founder of Rome. According to the myth they were raised by... yup you got it... wolves. Also lupine means "of or like a wolf".

Sirius Black: Sirius is the name of the brightest star in the sky, also known as The Dog Star. You'd have thought Hermione would've known that and saved a whole load of bother, she's obviously not as clever as we're lead to believe!

Sibyl Trelawney: In Greek mythology the Sibyls were ten prophet women who worshipped the god Apollo. Which seems pretty reasonable, however I prefer my own interpretation: Divination class takes place in a tower, Trelawney is a bit fawlty cos she's not very good, Sybil was Basil's wife in Fawlty Towers, hmmm… I think I'm onto something.

Fluffy: three-headed guard dog of the Philosopher's Stone Not so much a meaning as a character reference. Cerburus was three-headed dog in Greek mythology (stop me if you know this already), he guarded hell, but let some bloke through after he played some music (follow the links below for details). All very familiar.

Albus Dumbledore: According to one of the websites Albus comes from the latin word for white, which fits nicely. I found out that Dumbledore is some kind of bee and JK Rowlng herself actually says this is where she got it from. Which to be honest is kinda dull. More interestingly one of Dumbledore's middle names is Percival, which supposedly means "pierce the veil" the website suggests this may have something to do with the veils at the Ministry of Magic.

Lily Potter: A quicky, the Lily flower is a symbol of purity.

That's just the few I had time to write up. There's plenty of websites out there which go into sooo much more detail anyway. Here's some of the ones I used which may be of interest:

link (a rather good name-meaning site)

Being a geek isnt the stigma it once was. A number of bloggers are openly geek. Indeed such is the craze for all things geek, it is possible to get away with using the word as an adjective. There are a number of possible reasons for this:

The craze on blogs is for personality type tests. Many however come up with the unsurprising You are a geek; more useful would be to find out what type of geek you are. So here we have four categories of geek (pick your own, quizzes are dull):

Comic Book Fan (a.k.a. The Seth Cohen)
Previous form: Comic Book Store Guy off the Simpsons.
Now: In fashion after the success of the Spiderman films and TV series Smallville.
True Geek Powers: Love of comic books
Potential for selling out and betraying geek roots: High; you talk about yourself way too much. That doesnt make you a geek, that just makes you annoying and self-absorbed.
Chances of getting the guy/girl: High, low, high, low, high, low For some reason you are intermittently successful, but god only knows why.
At Warwick would study: Something modern and alternate sounding, Media Studies etc. Youre a geek but not a classic maths/physics type.
Likely to say: "I know, I get that. But if it is 'cause of me, maybe I can talk her out of it. Except for the fact that I can't ask her if it because of me without sounding totally self-absorbed. And I'm not self-absorbed, right Ryan? Me. Me. Me."

Swot (a.k.a. The Hermione Granger)
Previous form: Lisa Simpson, clever but very annoying.
Now: Taking bookworming to a new height, but in fashion because of a deep loyalty to your friends and a sense of right.
True Geek Powers: Superswot and hitting Malfoy
Potential for selling out and betraying geek roots: None, you pride yourself on being smart, why change?
Chances of getting the guy/girl: High, if they ever realise they like you.
At Warwick would study: History, all that readings right up your street.
Likely to say: "Not spew, it's S-P-E-W, Stands for the Society for the Promotion of Elvish Welfare."

Heroic Geek (a.k.a. The Peter Parker)
Previous Form: Clark Kent  not cool.
Now: Intense and introspective, the kind of geek who needs reassuring.
True Geek Powers: How about altering your DNA for size?
Potential for selling out and betraying geek roots: Medium, geeks arent usually strong, but you remain goofy with or without glasses.
Chances of getting the guy/girl: Okay, once you make your mind up.
At Warwick would study: Law, lots of potential for sulking and being serious.
Likely to say: "Whatever life holds in store for me, I will never forget these words: "With great power comes great responsibility." This is my gift, my curse. Who am I? I'm Spiderman." Yawn…

Shy Geek (a.k.a The Willow Rosenberg)
Previous Form: Matilda. Nice story when youre seven, but you cant go back.
Now: A little insecure, potential for losing the plot and trying to kill everyone.
True Geek Powers: Smart, also brave, sort of.
Potential for selling out and betraying geek roots: Low, what kind of geek wouldnt try to destroy the world given the chance?
Chances of getting the guy/girl: High, but you make the strangest choices: Best friends, werewolves, people who get their brains sucked out and then killed, potentials and even nearly added ex-rats to the list.
At Warwick would study: Chemistry, its like making magic potions.
Likely to say: "We can come by between classes. Usually I use that time to copy over my class notes with a system of different colored pens. But it's been pointed out to me that that's, you know… insane.