My favourite songs I heard first as TV themes:

Rembrants - I'll Be There, a.k.a. the theme from Friends: Friends was a little known American sit-com, you've probably never heard of it. The main basis of the programme was a great big "Will they? Won't they?" regarding the characters Rob and Rebecca (Or something similar, I forget). The theme was lovely and cheesy including the lyrics "You're still in bed at ten and work began at eight, you burnt your breakfast, so far things are going great." So profound, so true.

Remy Zero - Save Me, a.k.a. the theme from Smallville: The first series was great because of the "ooo, Superman as a teenager" factor, unfortunately it's gone downhill drastically since then. And, they've developed a nasty habit of stealing stories used in Buffy the Vampire Slayer, eg. Body swaps, invisibility, main character losing their powers, telepathy, witches, splitting a character into good side/bad side (The Buffy episode was way better, lots cleverer and much, much funnier) and so on. Plus it features the most boring and pointless "Will they? Won't they?" with Clark and Lana Lang. Pointless because we know how its gonna turn out. Stupid. The song's brilliant though. "Somebody Saaaave Me!". It sums it up quite nicely, ie. Save me from another godawful boring episode.

Phantom Planet - California a.k.a. the theme from The O.C. "Californyaaaaaaa, Californyaaaaaa, here we coooooooome". Another show featuring "Will they? Won't they?"'s Note the plural, Joss Schwartz must be really into his "WT?WT?"s. Personally I think Seth and Summer should be a "Will" and Ryan and Marissa a "Won't", largely because Ryan and Marissa bore the hell out of me and I want them to be miserable because of it. I think the O.C.'s completely shallow and vacuous but I love it and it's ridiculously funny. Though sometimes I'm not sure I'm laughing in the right places. eg. Lindsey: "Mom? What are you doing here?". hahaha! The theme makes me think of sunshine and beaches which can't be a bad thing.

Motor Ace - Death Defy a.k.a. the theme from The Secret Life of Us: "The Secret Life of What?" I hear you say. It was shown quite late on Channel 4 on - I think - Wednesday nights, possibly after Ally McBeal (no Vonda Sheppard isn't appearing in this list and for good reason - I'm not a girl). The show wasn't all that mega, it was just about a load of Australians going around getting drunk and having sex. Mind you, in all fairness are any TV shows about anything else? But the theme was ace (haha), and is what inspired me to make this list because I managed to track it down at last!

I don't have time to blog properly, so everyone else is going to do it for me!

I write the opening line to a story. The first person to read it thinks of a second line and posts it a comment. The next person reads what's been written so far, thinks of another line and posts that as a comment. And so on and so forth. So it builds as a story written by many people. Got it?

The opening line is:

I was walking around campus on a beautiful sunny evening wondering what to do.

Michael Walker is unable to blog for the time being, for his head has exploded.

At around 4am last night whilst in his sleep, Mike's head simply blew up into tiny pieces. Doctors are still working on gluing it back together with Pritt Stick. Their initial attempts using that purple UHU stuff proved fruitless because it's crap.

It is believed the head exploded due to ridiculous levels of stress, caused by, among other things: too much work, applications and an irrational phobia of the letter G.

Should the doctors be unsuccesful there will be an auction for key parts of Mike's brain. This is what would be on offer:

It is hoped that it won't come to this but you should bid early in order to stand the greatest chance of success.

If you're worried that you won't get your fix of 411 for a while, then even though you're clearly mad to care, fear not. Investigators have found two or three unfinished blog entries, which will be published here over the course of the next few weeks. It is also hoped that by sending electric current through a small part of Mike's brain that blog comments may be produced, however this is yet to be confirmed.

This entry was brought to you courtesy of the exploded head department at Coventry Hospital. If you wish to help Mike's plight please clap your hands and say "Mike, why did your head explode? Gosh darnit, that was very silly of you."

This is the monument on the village green in Meriden. Take a look at it. What do you reckon this? Left over firewood from the Bonfire Night? The remants of the village pub that became infested with termites? Perhaps it's from some ship that was sailed by someone from Meriden? 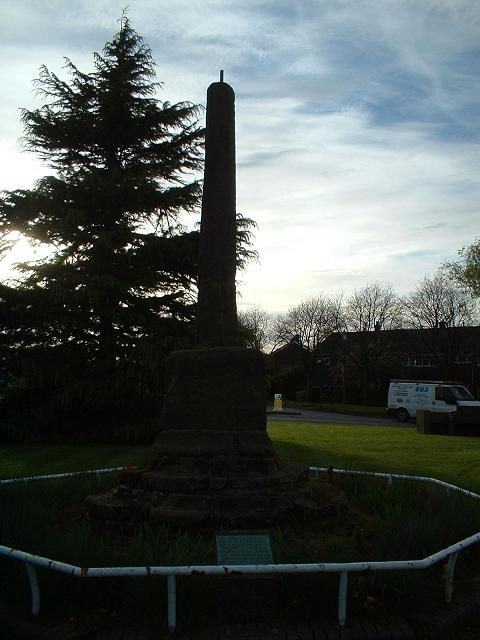 No, this "cross" in fact marks the geographical centre of England. I don't know what's in the centre of America, but I'm prepared to bet it involves lots of neon lights. Mind you, according to the plaque on the cross it was re-erected before Christopher Columbus, that master of navigation, had set sail looking for India. Nevertheless "cross" seems a slightly optimistic description. Whilst standing there I couldn't quite put my finger on what was wrong with it as a cross. It's made out of wood, which seems reasonable, it's not a draincover so that rules that possiblity out, wait… I think I have it… shouldn't a cross have, well, a _cross_beam?

It's a little disconcerting. On my way into the village I saw a banner saying "No Mast Meriden". Well this is a blatant lie as on the afore mentioned village green there is a rather obvious ship's mast. It makes you question the honesty of the people of Meriden. Perhaps the real cross is hidden in the village hall and is made of solid gold and is encrusted with diamonds. Perhaps the cross on the green really is left over firewood. Though you'd have thought for a convincing scam they'd have put more effort into making it look cross like.

Leaving slightly overegged cynicism aside, Meriden is very much what you'd expect the centre of England to be. Within spitting distance of the cross is a fish and chip shop. And it's all rather quaint if you like that sort of thing. It certainly looked very pretty on a sunny evening.

And it's not at all far from university, 7 or 8 miles perhaps. Now, you'd expect 7 or 8 miles on a bike to be nothing too difficult, but you have to take into account the fact that as far as bikes go I am cursed. Sure I got there easy enough, I didn't even get lost which is quite a novelty! However the journey back was less succesful.

A few miles from campus and suddenly my foot lurches forward on the pedal, "hmm this isn't right," I think. I try pedaling but its no use, the back wheel doesn't turn. "Damn, the chain must have come off." But oh no I look down and the chain rather than being a nice continuous loop has become a line on the floor. Theres two responses to this: To shout and swear and kick the bike or to simply let out a deep sigh.

I've read Lance Armstrong's autobiographies and if in a spot of mechanical trouble he would either ring his wife to pick him up or one of his friends to ride a bike out to so that he could ride back and leave his friend stranded. Seeing as I have neither a wife nor unbelievably stupid friends I reisgn myself to walking and pushing. Lucky for me it didn't happen too far from home, I don't think a walk back from Meriden would have much agreed with me.

I get back just as the sun's going down, and people are milling about campus. I'm just glad I was coming the way I was as if I'd pushed the bike up Gibbet Hill from Kenilworth I would have been thinking "It's broken, don't look at me like that" everytime someone drove past.

I like God. As deities go I think She (and God is a She. If God were a man he wouldn't have worked for the first six days and rested on the seventh. He'd have pissed about for the first six and done the job at the last minute) is okay. However I think She made some mistakes when creating people. Here are my suggestions for improvement:

Eyes on Fingers: For appearance purposes I'd say God got eyes about right. If someone asked me about how I'd want the eyes on my perfect woman, I'd probably go for two, between nose and forehead, one on each side. But I've always though an eye on the end of a finger would be neat, you could see so much more, looking round corners would be much easier and it would be mightily handy for seeing over things. Perhaps the finger next to the eye finger could glow in the dark for looking in holes.

Closable Ears: Well, if we can close our eyes, why not our ears too?

Titanium Bones: We're so brittle! So many maladies could be avoided if only our bones were a bit tougher. Titannium would add extra weight, but God could just make gravity a bit weaker and it wouldn't be a problem.

Longer Tongues: Who wouldn't want a longer tongue? (You at the back sniggering, ssshhh!). I'm talking about eating desserts here. My personal favourite is Angel Delight – I'd like to eat every last bit, but a spoon just isn't good enough, there's a limit on how much you can scrape. If you try putting your head in the bowl thats just asking for trouble. Not that I've tried it you understand, that'd be ridiculous. So the solution is a more extendable tonuge – easy.

Springy Feet: So you could bounce everywhere. Boing!

Less messy reproduction: Sex? Ewww... We'll have none of that horrible stuff thank you. It should be replaced with some kind of electromagnetic... thing, like on that TV show My Parents are Aliens (How the hell did they get away with that?), nothing that involves any physical contact at any rate – yuck.