Wow! I couldn't believe it when I read it in the paper, but apparently scientists working in the Amazon Rainforest have discovered plants that can walk. Frighteningly they're thought to be poisonous to humans. One scientist got too close and ended up in hospital after the plant lashed out at him. Eek! I'm glad we don't live in the tropics.

The plant has yet to be officially named, but are currently being refered to as Trigenates, given that they walk on three "legs". 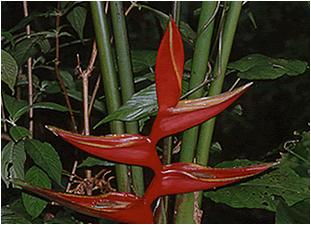 This is just a young version of the plant, fully grown ones have been spotted and can reach up to twelve feet in height.

Already rumours are starting as to why we haven't come across them before. Suggestions are that they are the result of genetic modifications made to regular plants and that there have been attempted cover ups. There have been mysterious cases of scientists in the area going missing or suddenly deciding to move on. Very suspicious.

The article also suggests that if not properly controlled the plants may pose a threat to human supremacy on Earth, though I find that very hard to believe. I wouldn't want one in my back garden though!