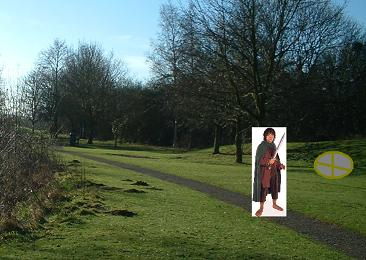 The University of Warwick is set be renamed as the University of the South Farthing [of the Shire]. The move comes after high ranking movie officials took a walk near the lakes on the way to Gibbet Hill. After performing a survey of the land they discovered that the area is in fact an exact replica of Hobbiton as used in their little known film "The Lord of the Rings", something they considered a breach of copyright laws. They also found a number of other irregularities. Initially it was thought the University might be sued, but a comprimise was reached whereby the university could continue as it is but with some minor alterations.

The name change is the most immediate and will take affect in time for the start of the next academic year. Aside from this, University House will become known as Barad-Dur, security will be called the Rohirrin and ride on horseback, Cryfield Pavillion will be called Edoras, Tocil Woods shall become Fangorn Forest and Westwood should be refered to as Mordor. "We could have forgiven the Hobbiton similarity, but after exploring the area further we found that the place is littered with copies of places from our film. Those residences, Rootes, they're so white, its such a rip off of Minas Tirith – the white city," says film spokesperson Jabby Proudfoot.

The university has assured students that this will not cause them any major problems. "We've had many orcs coming into Barad-Dur concerned with how this may affect their studies, but really it doesn't make much difference." said the Mouth of Sauron. When asked if orcs was the new name for students, he said "No, we've always called them that."

As part of this raft of changes, a number of new courses shall be offered: History of the One Ring, The Smoking of Pipeweed and Very, very, very long Film Studies. Also, freshers will be forced to live underground in holes, however this was a planned move anyway and has nothing to do with the other changes. The university is keen to stress that students must not take advantage of the alterations, any student caught smoking "Old Toby" in their halls of residence will not be allowed to live on campus and will have to fight for survival in the Misty Mountains.

Students are divided over the move. "I'm delighted" says Third Year Mark Shrubbery, "At last I can attack people who spill purple on me in the union. I bought a sword before coming here not realising that sort of thing wasn't allowed." Polly Yetinewt disagrees, "Its not the direction the university should be going in, they now have to accept Uruk Hai if they meet the entry conditions, its going to cause all sorts of problems with such aggressive people here. Every night at the union is going to be like Score."

Whether the changes are welcome are not, they look likely to stay. The university has already invested in building a black gate to replace the welcoming blue signs and are placing Fiery cracks in the Koan. Its too late to turn back now, Mellon.