What better lyrics for a sunny afternoon (perhaps the Kinks with Sunny Afternoon, a song which has the virtue of actually being called Sunny Afternoon) than:

I fall for this season everytime,
When it's hot and everybody smiles
I can't help myself, I'm i love with the suuuummertiiiiime.

The Divine Comedy with The Pop Singer's Fear of the Pollen Count.

They're such a great band. I was walking around campus the other day listening to them on my walkman (Yes, some of us are resisting the digital movement. Well at least until I can afford an mp3 player and then I'm right on board). Playing was their greatest hits album from a few years ago, A Secret History, or seeing as I'd condensed it to fit onto one side of tape, I guess my version was a potted history. 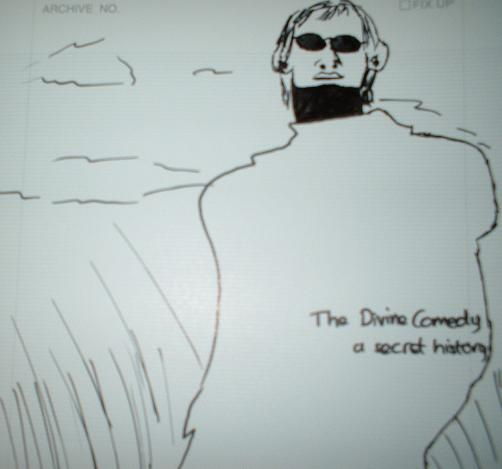 Artist's (Okay, my) impression of the cover to A Secret History.

For the uninitiated the Divine Comedy are an Irish band fronted by and sometimes consisting solely of Neil Hannon. They are possibly most famous for their involvement with Father Ted. The theme music for the show is taken from their track Songs of Love and they wrote My Lovely Horse which Ted and Dougal entered in "Eurosong '96".

Their first album was Liberation in 1993 featuring the aforementioned The Pop Singer's Fear of the Pollen Count (though it only became a hit in 1999). They hit the big time (?) on the release of Something for the Weekend which featured on Casanova, released in 1996.

Since then they've sort of plodded on through all manner of permutations and combinations, but remain a firm favourite of mine. I don't want to sound prententious but, (meaning "I'm going to be really pretentious here but I want you to like me anyway, oh go on, please!") I love how their songs create images in your mind and suck you into a story through verse (Gosh). In fact I suppose they're really poems put to tune.

For example, Something for the Weekend seems to be about a man at a party trying to have his way (*giggles*) with a woman. You have to really listen to the lyrics and think it about what it's saying, what's more the story twists at the end, I won't spoil it for you by saying how but it's quite funny.

Not only are the lyrics unadulterated genius but I'm assured by a friend with a musical bent that they're very talented as musicians too. In Something for the Weekend they change from the song being in… something to being in… something else. I'm not exactly sure what but apparently it's very clever so we should all be impressed. Since my friend told me about this whenever I listen to the song I'm always very relieved that they make it through okay without screwing it up.

If you're unfamiliar with the Divine Comedy I suggest you listen to the following: