I woke up this morning and the sun was shining so brightly from behind my curtains that I thought they might set alight. You'll be relieved to hear that they weren't but I decided today might be a good day to go for a decent bike ride.

I'd been wanting to ride to Stratford for a while, it is rather pretty, so I set of at around 945 from Warwick campus. A few miles into the ride and somethings bugging me. You know that feeling you get when you're sure you've forgotten something? Well that's what I was having. For the life of me I couldn't figure it out until I stopped for a drink, looked in my bag and noticed the distinct absense of a map. Before you call me a muppet think about how insulting that would be to Kermit the frog. Back I went.

At 1030 I set of from campus. I was riding merrily along towards Warwick when a white transit van (It's always a white transit van) goes by and I have sudden impression of moisture on my face. My initial reaction is that the van had kicked out water from the road, but the road was clearly dry. Clearly the fuckwit in the passenger seat had come to the conclusion that perhaps his mouth contained too much saliva and chosen the moment the van was going past me to rectify the situation. I waited until the van was out of sight before wiping my face, I wasn't about to give them the satisfaction. People really don't treat cyclists with enough respect in this country, in France they'll shout "Allez! Allez!" at you, and here's the important thing, they actually mean it as encouragement, but here you're more likely to get "Oi! Knobhead!" The most comforting thing in these situations is that the perpetrators are probably so stupid that there's every possibility that they'll just drive straight into a wall or something.

I get into Warwick and dismount. It's a nightmare around there with one way systems and busy junctions, safer to take your chances as a pedestrian. I've been to Warwick a few times, one thing that always astounds me is how difficult it is to find the castle – astonishing considering it's one of the country's most famous. Maybe it's got something to do with the topography of the place but I can never see it. Perhaps when explaining how muggles don't stumble across Hogwarts JK Rowling should get the people from Warwick castle to help out, they seem to have it down to a fine art. It must have been very useful if Warwick was under attack, any opponents would stroll in thinking how easy it was and suddenly there's a great big castle and they're all full of arrows before they know what's going on. Who'd've thought a castle could attack by stealth?

I get back on the bike and head out of Warwick. I hate this part, I never know where I am with Warwick. However hard I try I never leave where I mean to. I'll approach from the north and want to ride straight through exiting in the south. I'll try and keep going in the same direction but I'll end up in the west, it's crazy. Today I don't even bother trying to figure out which way I'm going, I just wait until I'm on the outskirts and sort things out then – sure enough I'm not where I planned to be but it'll do.

From here I have an uncharacteristic spell where my sense of direction functions as it should and I make it to Stratford without undue hassle.

I saw this on the approach to Stratford, now isn't that clever? The picture's not great, but take my word for it, it was neat.

In Stratford I survive the incredible amount of traffic. I guess isn't that surprising considering it's the school holidays. I find a spot on the grassy bit between the Royal Shakespeare Theatre and the nice sort of docks they have with canal barges converted into shops selling Hot Dogs or Ice Cream. It's quite clever really. I'm very tempted to buy a Hot Dog or burger but I made some sandwiches and I'm not about to let them go to waste. Damn my stubborness. 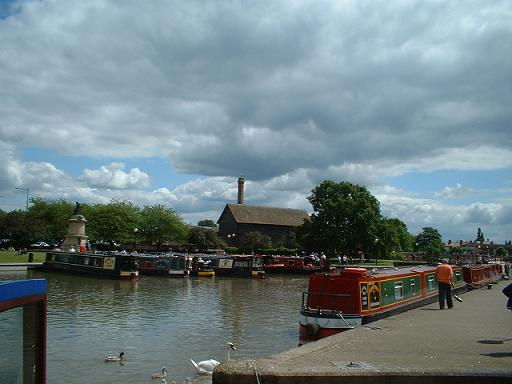 The nice dock bit in Stratford, unsurprisingly there were plenty of people about. 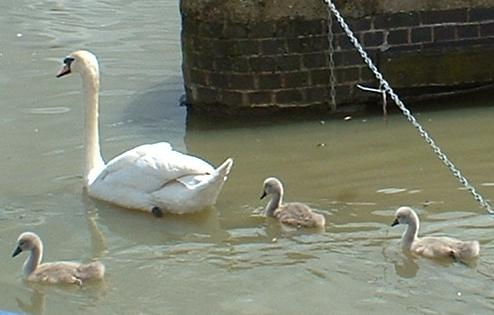 People go on about ducklings, but aren't these baby swans sweet? What are they called, swanlings? I don't understand why they're ugly ducklings, they're not the slightest bit ugly. I think of myself as a bit of an ugly duckling, except the ugly duckling turned into a beautiful swan whereas I had the misfortune of turning into me.

The grass was full of people, but there was a ring that had been made around a tramp. Seeing as I probably didn't look all that great after cycling all morning I wondered if people would give me the same treatment. Hell, maybe the tramp would've have moved away if I'd sat anywhere near him. Who knows? I certainly wasn't going to try and find out. 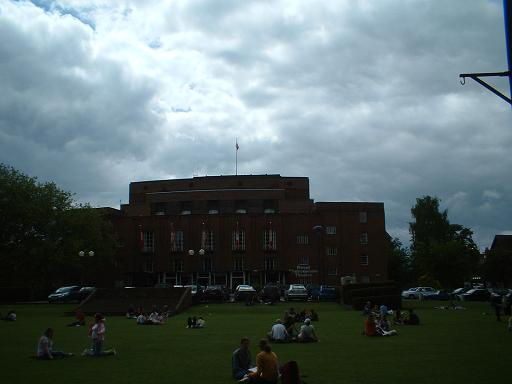 The Royal Shaekspeare Theatre. It looks awfully grim here, I don't think the clouds around it helped. It does look more like a prison than a place for performing arts though.

After lunch I head off, I pass this guy with a ventriloquists dumby and tacky music playing. You know the sort, one track was used in an advert I believe. I can''t remember what for but it was along the lines of "Take good care of yourself, you belong to me." Truthfully it's not all that impressive, but it wasn't particularly liable to offend.

Leaving Stratford proves tricky. I cycle in what I believe to be the right direction but I just come to dead ends, I cycle back to where I'd started. The guy with the dumby is still there. I try a different direction, but soon realise that this is taking me deeper in Stratford, I'd been fooled like this before here, I'm clever and avoid making the same mistake again. I head back and end up going past the guy with the dumby again, he's starting to annoy me now. Off I go again, but I soon come to a church I remember going past on my first attempt. Christ! Stratford must have been taking tips from Warwick, except they've taken it to the next level, you can't leave at all! The street I've just come up is one way, but I turn around and ride in the wrong direction. I'm past caring, really I am, I'm getting out of Stratford even if it's in an ambulance. Cars drive past me and shout "It's one way!", I respond with a cheery smile and a "You have a nice day too!"

I go past the dumby guy again, if I don't get out of Stratford soon I won't be held responsible for my actions. Currently the guy has his hand up the dumbies arse, I can envisage a scenario where these roles are reversed. I try another direction. I'm going to stick with it even if I end up in Timbucktoo.

I soon end up in Timbucktoo. I'm kidding! As luck would have it this is the right way, and hurray! I'm out of Stratford. I'm on quiet country roads now and despite a few wrong turnings I do okay and don't end up in Wales.

Doh! Oh dear! I keep getting lost. But if I hadn't I wouldn't haave come across these deer.

I make good progress and I'm soon in Leamington. This is a great relief seeing as I know the place more or less like the back of my hand. Largely this is because it's not actually much bigger than my hand. Unfortunately I have more navigational issues as the shopping parade is closed off for roadworks. Luckily a detour isn't too difficult in spite of more one way streets. From here it's plain sailing and I'm back on campus just after four. I'm knackered! For the past few months I've been doing little but revising, which frankly doesn't take much physical exertion, unless perhaps you study pogoing. So a six hour plus bike ride to follow that might not have been the smartest move. I have a shower, collapse on my bed still in my towel (now there's an image) and fall asleep.