I once again am a cyclist. I was bike-less all last term, or rather my bike was wheel-less, which is more or less the same thing. Some gits stole the wheels in week one, sigh. Anyway last week I bought a Dawes Discovery, which by all accounts seems a very ride-able bike, in spite of a few inexplicabilities: such as a suspension seat post and about 451 gears. Well I suppose taking into account those of which are accessible and not counting duplicate ratios there's probably about seven. 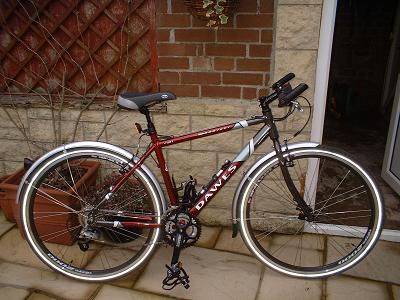 Anyway Ive managed two rides since then, heres the report of the first:

I set off just after 10am to try and get a good days riding in, my intention is to ride along by the dams at Ladybower, Derwent and Howden. Im used to riding a mountain bike with great fat tyres and my new bikes are thinner and more road-sensible, combine this with greasy road conditions and I decide to take things easy, 2 miles from home I come to the bottom of a hill and a turn off, I go at what I think is a sensible speed but oh, whats this? The bike starts to slide, I try to steady myself with my feet, but oh no! Toe-clips! Completely not used to this restriction I find myself stuck the bike and skid down and graze my leg. Nice start, seeing as my previous ride was a kamikaze effort in winter over snow and ice on Totley Moors this makes two accidents ["Hmmm, there's a big patch of ice there… I know! The quicker I go over it the less time I'll spend on it, the less chance I'll fall off…" I start to wobble "ooo, ahhh, ow!"] in two rides, excellent. Fortunately a nice cyclist comes past and checks if Im okay. I am and set off again cursing myself for scratching the pedals and bar ends, oh well at least I was sufficiently in the way to protect anything important. Student mentality means I'd rather break both legss than have to pay to repair a bike.

Coming through Dore Im forced to stop again after I knock the front mudguard with my feet and it starts rubbing on the tyres. Things are going really well! Fortunately I am carrying spanners, otherwise I'd feel liek one. I say fortunately because it's a new habit. My mountain bike had special gel stuff in the tyres that automatically fixed punctures so I didn;t bother with tools. I'm soon off again to the outskirts of Sheffield wondering why I would want to be riding when its so cloudy and ominous, but the weatherlady promised me sunshine I think. I come to my first view of the day. Burbage Rocks, they're nice when the suns shining, however today they just look bleak. Also its very windy (why is it always a head wind?) up there so it makes life hard work. 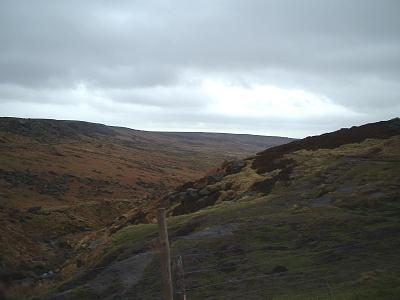 I head off down a massive descent, all in all I think it goes down about 250 metres in the space of around 4(?) miles, well it sort of bobs up and down a bit but gravity does the most work at least. Seeing as Ive only ever been up that way and not down it kind of feels like revenge, though after my earlier adventures I take it quite easy.

After over two hours on the road, or perhaps one and half hours on the road half an hour fixing the bike or myself I finally make it to Ladybower dam, its quite spectacular in a British sort of way. The dams were built whenever and the bed of Ladybower reserviour used to be a town, perhaps there aare other towns out there that ought to follow this lead. 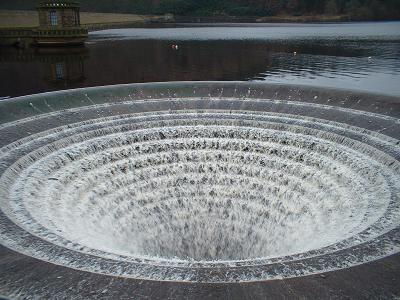 Feeling thoroughly dejected at having only come about 15 miles in two hours I stop to have some lunch. After this I set off for Derwent dam, finally I get there a little after one o clock. I take a few pictures for the blog and wonder how on earth this ride is taking so long. 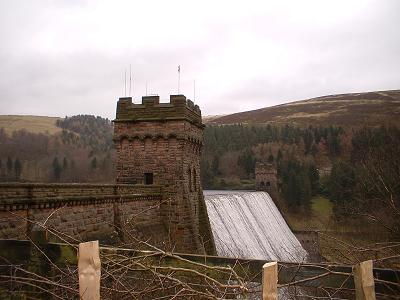 As a point of interest, these dams were used to practice dropping the bouncing bomb – inactive naturally! Yknow the whole dambusters thing, see history everywhere. 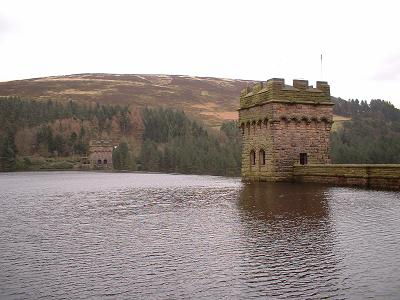 I abort my plans to ride all the way along, Ive done it before I doubt much has changed. Heading back I feel much stronger and get a fair bit of speed going and soon Im in Hathersage, here I come to the biggest climb of the day. Its long, about 2(?) miles against gravity, but its not especially steep and you only go up by around 150–200 metres in all that distance. Indeed when the Tour of Britain cycle race came by it wasnt even a climb which depresses me greatly as I struggle up, it wasnt this hard work last summer Im sure! 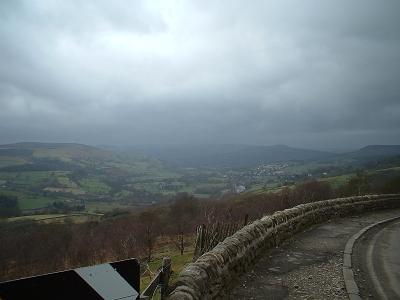 On bike rides I usually find songs going round and round my head, today I started with the Futureheads and Hounds of Love on endless repeat, however all this thinking about last summer means I now have that godawful Lost Prophets song stuck in my head, this really is turning into a horrible bike ride. Soon enough though I find myself going past Padley Gorge and the Fox House Inn. From here its plain sailing because its mostly downhill home. I get back and sit down. Im quite disappointed, but I hadnt ridden since December so no wonder I struggled. Nevertheless it was nice to be riding again.