All entries for Tuesday 13 September 2005

As previously reported in this blog, squirrels are evil. Here is a chart showing the top ten most evil entities ever:

In the previous blog entry I drew attention to squirrels pretending to be rabbits in order to get into people's homes. Now they've taken on grander designs. Here is a picture of the University of Warwick Students Union taken with a normal camera. Try to spot any disguised squirrels. I'll give you a clue, there are four of them. 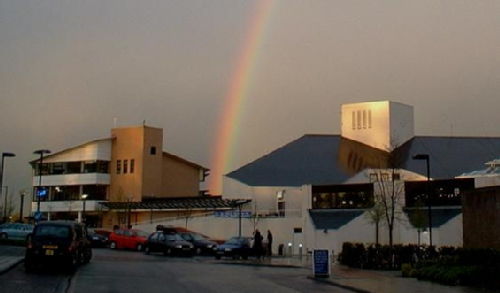 Can you see them? Here's some help: this is the same shot, but taken with a special camera that conveniently put's circles around any disguised squirrels. How many did you manage to get? Not many? Without the special camera it's very difficult indeed, but not impossible. I'll give you some tips.

If you bear these in mind then you'll have a much better chance of fighting the squirrels. It's gotten to the point where squirrels could be anywhere, before they only appeared in isolated areas. You have been warned.