Do you have a Z–chromosome?

If you're reading this, then the chances are that you do.

I was reading New Scientist the other day and there was an article about how geneticists may have discovered a new chromosome present in students. The bare bones of it is that this "Z-chromosome", as it is called, contributes to the fundamentals of being a student. This includes: An unparalleled ability to procrastinate, utter joy at staring out of the window for hours on end, a love of shiney things and the stomach to eat terrible foodstuffs. Here's a snippet of the original article: 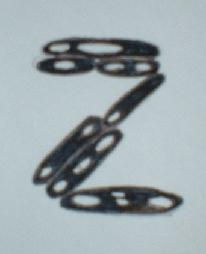 "The big breakthrough for Dr. Sidrat and his team came whilst investigating outside student unions around the country at closing time. 'We decided that to see the full power of the Z-chromosome we would have to catch students at their most primitive. This is around 2am on Saturday mornings. At this time of day students are likely to be doing one of the following: Eating what passes for a kebab or burger, developing an unhealthy obsession with breasts, emptying their stomachs, climbing objects, throwing objects, stealing objects or even eating objects and generally acting like apes.'

It was their hypothesis that this behaviour was the result of the Z-chromosome becoming dominant and producing a rare hormone called Esor. To test this theory they took swabs from students passed out in gutters and took their wallets. This last part had nothing to do with the research, they were just short on funds. Sure enough when they got the samples back to the lab, Esor was found in quantities as much as three million times what would be expected in normal human beings.

Using this information and what was already known about Esor, they could taylor further tests to best look for results. One test they did was putting students in a room. In the room there was several pieces of fine art on one wall, opposite from this was a window overlooking the back of a grocers. Upon entering the room the students would glance casually at the paintings and sort of shrug, then immediately turn to stare out of the window, even if the only thing going on was a delivery man moving crates. The results astounded Sidrat. 'What was truly amazing was the consistency with which this was echoed. Even students wearing scarves and duffle coats had little interest in the artwork, it was astonishing.'

Another test involved handing random foods - including a jar of mustard, uncooked pasta and gravy granules - to students, telling them it was a kebab and gauging their reaction. 'Approximately nine out of ten took what we gave them and merrily chomped away. They didn't even realise it wasn't a kebab.'"

It really was a terrific read and should you have access to a copy of the magazine I suggest you read it. After discussing the Z-chromosomes the article briefly mentions the possibility of a W-chromosome found in Chavs explaing why they're such w&\*?rs.