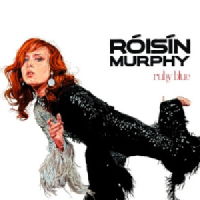 “Could there be such a thing as beautifully flawed?” Roisin sings on Through Time, one of the highlights of Ruby Blue, and you could say by the evidence of this record, she’s right…

Everyone obviously knows the impenetrable sheen of Moloko’s classic single Sing It Back, but on the band’s break-up, Roisin turned to the experimental producer extrordinaire, Matthew Herbert to produce this, her debut solo album. I’d never heard much of her previous output besides the obvious, but was drawn in by Herbert’s presence, having been a fan of Scale, an album that took his experimental pazz-jop to create a song for every major key.

The results are surprisingly effective and, less surprisingly, quite diverse, knowing Herbert’s past using everything from Bodily Functions to things Around the House to obtain his samples. The album’s truly great section begins with the voodoo midnight jazz rattle Night of the Dancing Flame, the aforementioned low-key (all soft pads, muted jazz organ and shuffling beat) ballad Through Time, to the absolute dancefloor stunner Sow Into You. I’m actually surprised I’d never heard this as a single anywhere, because it’s so perfectly formed for the album, mixing the brass and pad elements heard before dancing around that classic ‘snare-bass-snare-bass’ beat to a chorus that subtly grows every time it approaches, to the curveball of a bridge and back again through scores of Roisin in each speaker ripped and sampled till it breaks down to singular final angelic rise.

And as you’d hopefully expect, the vocal performances are definitely of note, with a great range offered by Roisin here, from the pop diva as we know her, to the caberet closer, to a sometimes (I can’t think of another way to describe it) Missy Elliott aping pout (just listen to the chorus of the title track – “You neva…get too cleva…”). And it’s not just the lead, the backing vocal, that at times winds around itself, haunting choruses or general harmonies or those previously mentioned slight vocal tics glitching up the beat or as a simple sharp hollaback to the main character (Dear Diary).

There are a few times when the experimental line to unlistenable is crossed though, Off On It serves little purpose apart from making it take longer to get to the closer, and Ramalama (bang bang) almost rescues itself with the rest of the arrangement but the detuned ‘bang bang’ of the title grates along with nary a nod to the rest of the album’s pop nous.

Knowing that though, Roisin rather aptly follows the opening quote with, “We all make mistakes and then / life is the art of / learning to live with it…” So yeah, I can live with this, a great album here in a genre I wouldn’t normally visit and a lot of joy to be held to your ears in that opening half.

Start with: Night of the Dancing Flame -> Sow Into You
Stream from MatthewHerbert.com | Amazon Link

(Slightly geeky note: Listen to the intro to ‘Through Time’ and you know, I can’t help but be reminded not of Stevie Wonder, which I’ve read elsewhere, but of the music you hear at the World’s Largest Ball of Twine from the LucasArts adventure game, Sam ‘n Max Hit The Road… look it up…and then play it.)