Name: Matt 'Jeff' Jones
Number one in UK when I was born: Nena – 99 Red Balloons
First album bought: Oasis – (What's The Story) Morning Glory?
First gig attended: A Kind Of Magic (a Queen tribute band). Oh dear.
Favourite album: Metallica – Kill 'Em All
Favourite song: System of a Down – Forest
Favourite gig: System of a Down, B'ham Academy, 2002
Favourite band: Either SOAD or Metallica
Favourite genre: Metal
The band you like but are embarassed about/feel is a little out of place in your collection: Probably Head Automatica, for being out of place.
Number of CDs bought since 1st January 2006: 9
What musical event would you most like to see happen: Rage Against The Machine reform. I never got to see them live, which blows.
Musical hero: Tom Morello
Music's biggest enemy/ies in my opinion are: The music press. Just because they love/hate a band, doesn't mean I'm going to, although they don't seem to see that.

For your aural delight… 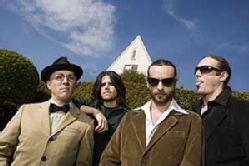