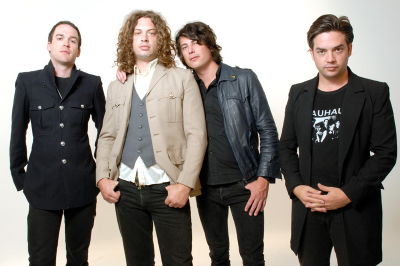 May 2007 was New Zealand’s Music Month, and although I did notice that there was a week of bands playing on campus in the Quad, it never seemed to catch the imagination, or even attention of a lot of people I talked to.

Maybe I was talking to the wrong people (I mean, engineers entertainment is usually in alcoholic liquid form), but maybe it wasn’t all that good? In the last fortnight or so, I set out about gathering some tracks from NZ bands in the attempt to gauge what was going on, and if there was a ‘scene’ at all…

If I asked you to name a New Zealand band, I suspect a lot of people would go ‘uh?’, I’d mention Crowded House and you’d go ‘really?’, or The Datsuns and you’d go ‘who?’, or maybe even mention some Australian bands that probably get mixed up now and again. I mean the accent’s the same, right? Wrong.

So over the next few weeks, I’m going to educate you about what I’ve found about NZ music. So…

Motocade, who I went to see last week live and who have been getting a lot of good blog hype (for good reason), one of the national music magazines, Real Groove, which conveniently had a showcase of NZ bands on its cover CD, and of course the local university band scene, of which I have also been to see a few bands and ‘obtained’ a compilation CD. If I have time, you may also get a post about some of the more the mainstream NZ music, the Australian/NZ crossover, the dub influence and a reminisce about Drum ‘n Bass clubbing in Dunedin (or maybe not).

Let’s pretend to be part of the scene,
They can show you, what fucked really is… oh!

Wolf Parade are a Canadian rock band who I have heard some tracks by recently and enjoyed. I like that jaunty, putting-on-silly-and-slightly-unhinged-voices style of singing with the usual borderline-generic indie sound. They’re a fun band. I don’t know much more about them than that and that I’ve enjoyed the tracks I’ve listened to recently. I’m not good at this ‘exhaustively explaining a band and forcing you to listen to them’ thing, ok?

Here are a couple of the tracks I like:

Dear Sons and Daughters of Hungry Ghosts
Shine a Light

The Damn Coolest Mixtape in all the land Lately, I’ve got into more and more music that is the epitome of cool as hell funktronica. Here, I share with you some of the funkiest. Buy these albums, players.

It’s exam time again which means another excuse to listen to trashy, cheesy, inspirational, and invariably hilarious music in a pathetic attempt to relieve stress and imbue oneself with hollow confidence. Kenny Loggins – Footloose (from the film Footloose)
Joe Esposito – You’re the Best (from The Karate Kid)
Stan Bush – The Touch (from Transformers, and Boogie Nights)
Desmond Child – Last of an Ancient Breed (from The Warriors)
Survivor – The Eye of the Tiger
Kenny Loggins – Highway to the Danger Zone (from Top Gun)
Paul Engemann – Scarface Push It To The Limit (from Scarface)
Van Halen – Dreams

Push it to the limit, yeah?


For some reason, The Touch seems to be playing at a slower speed than it should (I’ve checked the mp3 I uploaded and it’s fine) – most odd! Download it here, if you like.