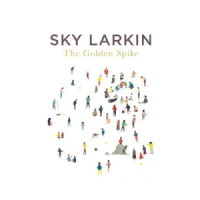 This review is most likely to be fairly short and snappy, partly like the band itself, but more because I’m already halfway through the month of another set of cracking albums to write about… so let’s get started and have a little dance shall we?

Sky Larkin race out of the blocks in almost every single song, recalling that great raucous indie rock bounce of 100 Broken Windows-era Idlewild, but fronted by a wild woman in Katie Harkin. She seems to share the same passion for the absurdist lyric as Roddy Woomble, belting out seemingly unrelated rhymes purely for the sound of their syllables than any sort of connection to a coherent meaning. Check out Antibodies, with its choral line – ‘Sentiments stretched over sediment and soil / Throw it overarm… / Throw it…’. Delightfully delivered in the same way Bjork might spit out an oddly lost-in-translation line whilst meaning not a jot.

It matters just as little though, as the band racket through the riffs, arranged around that godly trio of guitar, bass and drums with the occasional keyboard peeking in, but hammered on with similar gusto. The longest song here One Of Two, is actually the only one that outstays its welcome, not much benefit arising from its repetitive chorus, with the following Matador faring much better, its Spanish inflected beat allowing much more room for manoeuvres. It’s a simple formula that’s blitzed through the twelve songs, some riffs naturally larger than others, but all offering some opportunity to rock out.

For that reason, I can listen to this straight through, grinning madly at the sheer exuberance on display, devoid of any pretense, and sing along blindly to the nonsense, and there’s no reason why you shouldn’t too.

Start with: Fossil, I
Spotify stream | Buy at Amazon