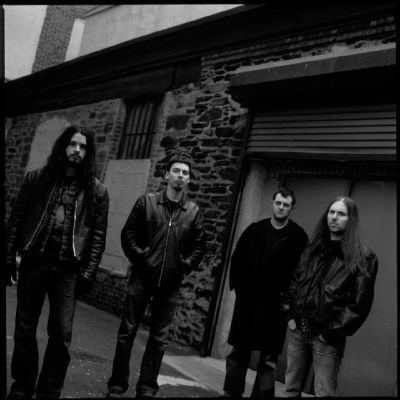 An absolutely amazing band. Songs that go well over the 10 minute mark, with a crushingly heavy sound. Imagine classical music, then reverse it – the violins are feedback sounds and the singer is a guy being tortured. A total assault on your senses, the bass shakes the room and the screams from singer Alan Dublin chilling your bones, whilst your eardrums are subjected to a series of crashes, bangs and feedback sounds. The hellish brooding drone doom metal with such inhuman vocal construct is a treat for tortured souls (read: angsty teenagers), metalheads and noise–lovers alike.

One of their best tracks is Commuted, from the Things Viral album. At almost 20 minutes long, it is a prime example of the band. This 'song' starts off slowly, with what sounds like someone hitting the mic against a wall, before slow drumbeats begin. The tension rises as a low noise cuts in and a guitar chord is slowly played. Around 2 minutes in, the vocals start– Alan Dublin screaming brutally into the rhythmic feedback and drums. The song peaks at around 8 minutes in, becoming noisier by the second.

All in all, Khanate are not a band to play loudly if you still want your neighbours to be your friends. Likened to a 'deafening roar', Khanate are the ultimate in 'doom metal' music, and are definitely not for the faint– hearted.

Formulaic. Obvious. The quintessential blog–way to introduce oneself…..here am I

Name: Chris Rossdale
Number one in UK when I was born: Madonna – Something Generic
First album bought: Something awful….Aqua I think. Poor. Very poor.
First gig attended: Greenday/No Doubt. Backstage. Get In.
Favourite album: Changes often, usually something by Radiohead or the Pixies. It's Jeff Buckley's Grace right now though.
Favourite song: Radiohead – Paranoid Android, or Pixies – Where Is My Mind, or Joy Division – She's Lost Control. Or something else tomorrow….
Favourite gig: Last month's Long Blondes gig comes pretty damn high….The White Stripes at the Apollo were amazing last November too.
Favourite band: Radiohead or the Pixies.
Favourite genre: New Wave/Post Punk
The band you like but are embarassed about/feel is a little out of place in your collection: The Presidents of the United States of America represent everything I hate about modern 'punk' music. And they're AWESOME.
Number of CDs bought since 1st January 2006: 20? Ish? I've procured a good few more than that though.
What musical event would you most like to see happen: The resurrection of Jeff Curtis (half Jeff Buckley, half Ian Curtis). Together with himself, he would lead the revolution in modern music and restore the glory days. Take us back to a time bands like Razorlight aren't worrying because 'they're too close to a deadline'. A deadline in creating music!? Makes me sick…..
Musical hero: Martin Hannett (Factory Records producer, worked with Joy Division, Durutti Column, John Cooper Clarke, A Certain Ratio and many others)
Music's biggest enemy/ies in my opinion are: The Arctic Monkeys. Well, not all of them, or even all of him: just his voice. His irritating scratchy would–rather–listen–to–Dick–Van–Dyke–do–a–regional–accent–voice just makes me want to throw away all my music and cry in a dark secluded corner. It is music's arch enemy, and it must be destroyed.

Imagine if Elastica and Yeah Yeah Yeahs had a baby. First of all she'd have the most amazing fringe in the world ever, like mummy Justine and mummy Karen.

Second of all she'd make music which has the jerky, ADD excitement of Yeah Yeah Yeahs, but with the flippant cool of Elastica. She'd be able to do the slow songs just as well as the fast ones. She'd be able to make German sound like the sexiest French phrase ever spoken (i.e. so sexy your underpants will make a b–line for the floor were you to hear it). She'd probably be called Liz Neumayr and be in a band with a drummer called Ben Esser and a guitarist called Matt Lord. And they'd call the band Ladyfuzz…

Ok, so Liz doesn't have the fringe which would lead us into a new era of fringe empowerment and wonder (shame) but the other ingredients are there so be satisfied goddam it! Ladyfuzz do sound like all those elements above. They sound like sweeties and happy colours and bouncing on a pile of matresses(not that I did this earlier, honest… ahem) but they also sound like brooding, moody, experimental seductionists. Sometimes in German! Austrian German!

they are not all ladies, some are boys too… but their music is all fuzz

and there does seem to be something endearing about them, their mild (i.e. not irritatingly forced) surreal side doesn't overpower their attempts to actually do something more interesting than just bash their instruments until they break. Whilst everyone seems to want a piece of The Futureheads' pie, Ladyfuzz have decided to take from the Sunderland group one of their more intriguing ideas – the a capella. 'Staple Gun' may not be enough kickstart the voice only revolution (though put it on a mixtape with 'Danger Of The Water'(The Futureheads) for a chilled listen) but it's great as a change of pace on their album, Kerfuffle which you really ought to go and buy before it ambushes you late and night with, frankly bonkers, single 'Bouncy Ball' an ode to, um, bouncy balls and gymnastics.