This is just too awesome to remain unblogged. It would seem that my brother is a creative genius with rice, this is his latest masterpiece – Jimi Hendrix, made entirely from uncooked rice placed on his campus bedroom carpet. Teh Win is it not? 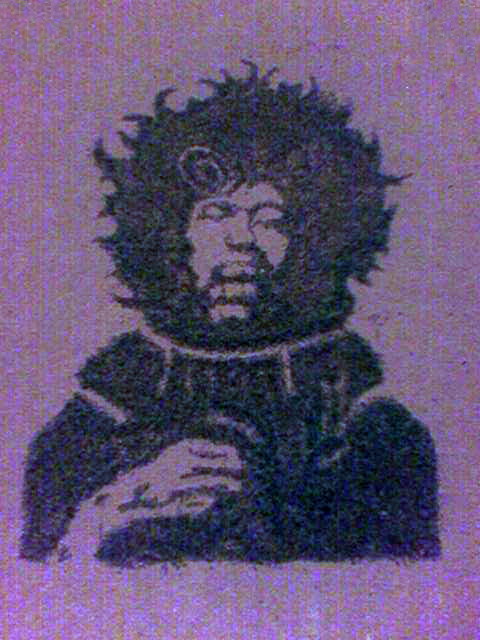 This is the inverted image. For the original click here

EDIT: Also, why am I almost one third of the hot topics? What is up with everyone? This is unnatural… 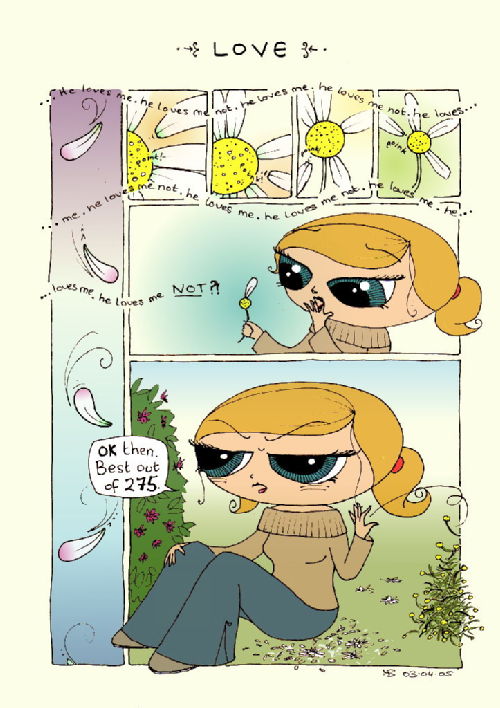 If February 14th is for couples, just remember that February 15th is everyone elses turn to celebrate; so use the opportunity to buy a nice big box of reduced chocolates to treat that special someone in your life - you.

Or just stock up with cards and fluffy crap for next year. Y'know. Whatever. …As soon as you earn their trust.

And trust me, tea and korma will seal the deal. Albeit in a rather runny coconuty way. in other news people are raping my artwork and posting it on facebook! Dude! not cool. Just, y'know, let me know sometime… Otherwise I have much less to brag about.

And I know I havn't posted lately. The sad truth is I lost my funny, it climbed out of the window while I was lying in a revision induced coma on the floor. And on top of that the bastard took my wallet… Still, with my funny gone there was no other option than to resort to my grump. Unfortunately m grump is rather scatterbrained and never finished anything. So here are tasty snippets of verbalised irritation you missed through lack of completion:

On intelligence...
Sometimes life feels so stagnant and insipid. It's hard to pinpoint the exact cause of this unease, this misericordia. That is until you realise that the world is retarded. That underlying unrest in your soul is probably thinly veiled despair. And as you watch it shifts and contorts into all manner of unspeakable abominations only just visible in the periphery of your vision. Surely the only reason for the daily ennui is a mere loss of stimulus? Elusive despite the constant unresting search.
…
Quite frankly humans piss me off right now and the whole complacent society that they have wrapped around themselves. It seems to leach even into your body numbing the senses. There's a distinct lack of intellectual turnover it would seem. As is often commented about money, sometimes you have to spend it to make more of it. And as with money, you havn't got all that long to do anything with it, 80 years if you're lucky and live carefully. nowadays it's commonplace to see people drop down dead at only 40–45. Most people reading this will be in their early 20s, essentially 50% gone already, and what have you achieved so far?
…
And this information turnover is echoed in generations. Society relies on the amassing of information and then its accurate conveying to the next generation, essentially the propagation of intellectual memes. And, as in the more conventional genetics, this must occur as a transfer from the 'parent' to the 'child', from the 'learned' to the 'nieve'. Each new generation is a fresh clean slate, ripe with the benefits that that brings, such as new ideas and enthusiasm. But all that is of little use if it has nowhere to start. We don't need people rediscovering the wheel or language, millions of generations have already perished to get us this far and it's such a waste not to build upon it.

On God...
As much as I would like to believe that God lives in a trailer somewhere, always burns the toast and is a bit "Who?! What?! Me?!", He isn't. If there is a God up there somewhere, he is most definitely beyond our comprehension at a seriously mind–melting extreme; on a scale with toothpicks at one end and God at the other (and IKEA instruction booklets somewhere in between). God's logic and reasoning is so far beyond our plane of understanding that to take in a fraction of it would reduce our brains to the consistency of rather runny brie that would promptly vacate the premises via our eye sockets. Or ears, or both, whatever, I'm just attempting to get a sense of scale and perspective here. Omnipotent, omniscient, omnipresent, infallible, existing before and beyond time itself. Think about it. Awesome and infinite. God is the ultimate mystery, the unknown. And yet, despite this you celebrated His birthday a few months ago in a rather mundane setting with your auntie Agatha and a turkey. Now that strikes me as rather strange, but I don't let it bother me because chances are it doesn't bother Him. God has better stuff to be doing than measure his life in mere years… right? I mean it's not that large a leap of thought to assume that He Who Created The Void And All Therein is not too concerned about whose turn it is to cook the stuffing right?

Right. Now that bundle of wonderful is going to have to keep you going for an entire week while I jet of to Milan to talk style with fashionistas (read: "Scotland for family stuff") And along the lines of fashion anyone who wants to hire one of my ballgowns should seriously get in contact sometime soon if they want to try them all and prance about in heels. It's what I make them for. :)

Artwork from the Protein Targeting Exam. I couldn't help myself, I just couldn't tear my eyes away. :| T minus 10 days and counting…

And the procrastination begins in earnest.

There's nothing quite like a large influx of life-changing exams to make one want to doodle all over your revision notes. That and some lovely lovely people told me my drawings were prrrretty ^_^

Thankfully most of coming posts were done a while ago and thus will not interfere with my precious revision. They're in black and white because I havn't the time to tart them up – having said that, if they start appearing in colour permission is duly granted for everyone to hurl abuse and tell me to get my ass into gear. However, there is no guarantee that these will be heeded.

Still, I finish on the 25th of April (booya!) which gives me about 17 days of grief left. It seems rather early to me, does anyone finish before then? Five and a bit weeks One reaches a certain point in a degree, the "point of no return", when realisation dawns that although this isn't the subject for you, you've just got to bloody well get on with it because if you don't it brings the failure and the pain and the red hot flailing whips of torment lashing across your SOUL and… Ok… maybe I'm getting a bit carried away.

I guess what I'm trying to say is that the clever ones jump ship early in the first year and the rest just hope and pray they can swim. Bah… praying… what's God got to do with it anyway? what's with the praying eh? If I pass it was God; If I fail it was me?! No thank you very much. I know exactly whose head the dunce hat/laurels of victory will rest and as such, I will take the blame or glory myself.

Fair is fair tho, and I won't forget it. So when Jesus descends from the heavens veiled in almighty light, don't worry – I won't try to take any of the credit. Today does not appear to be one of those days.
Bitch bitch bitch. Moan moan moan. Not even I want to hear me complain.
Yes it's all my fault.
No that doesn't make me feel better. And now my feet are going numb. STFAGOS. Bed.
Losing it.
Big time.
Thank heavens for private entries.
Please let it go away. 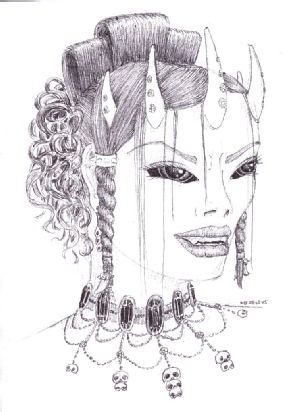 This one's for the hippy on the plane that ran away from me while I was drawing it.